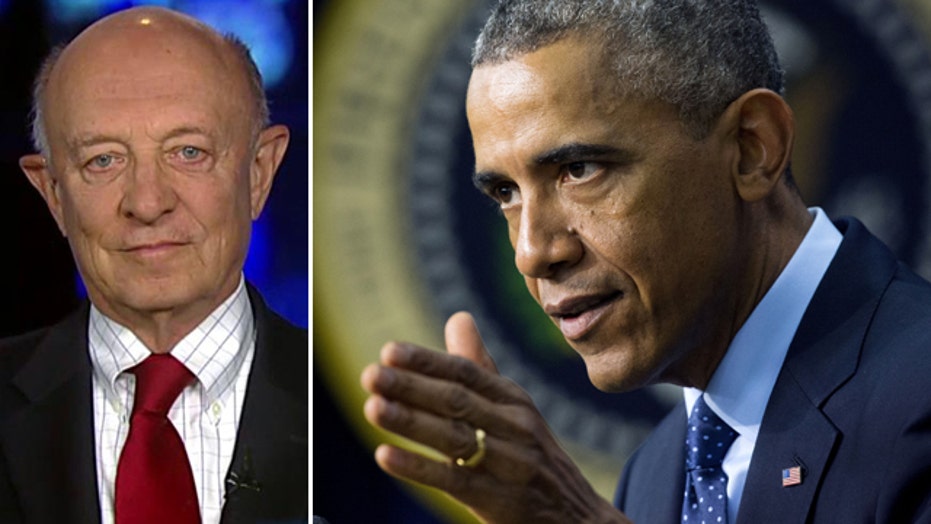 James Woolsey questions if president was 'paying attention' to assessments

One wouldn't be surprised if President Obama's Director of National Intelligence, James Clapper, woke up Monday morning checking for tire tracks after his boss effectively threw him under the bus for having "underestimated" the threat posed by the Islamic State militant group.

But Obama's remarks in a "60 Minutes" interview drew immediate objections from lawmakers and the intelligence community.

In the interview, Obama was asked how the Islamic State was able to gain so much territory. "Our head of the intelligence community Jim Clapper has acknowledged that I think they underestimated what had been taking place in Syria," the president said.

Clapper previously had admitted that U.S. analysts both underestimated the Islamic State, or ISIS, and "overestimated" the ability of the Iraqi army to fight them.

But sources say Obama nevertheless was looped in on the rise of ISIS for a while.

A military intelligence official told Fox News that the Obama administration had options on the table to target senior leadership of ISIS -- as well as the Al Qaeda-aligned Khorasan Group -- in the 18 months leading up to the strikes in Syria which began last week.

The official, who is familiar with the data collection, said the threat from ISIS and Khorasan was well-documented in the president's daily brief for over a year, but the White House failed to act.

The official said the intelligence community "pushed hard" to identify the leadership of both groups for targeting purposes and these options were presented to the president's team -- and "every option was denied."

Rep. Peter King, R-N.Y., also questioned the president's comments on Monday. Speaking on MSNBC, he said he himself became aware of the threat in the summer of 2013. King said Obama "dropped the ball" and is trying to blame others.

"The intelligence comments -- intelligence people are pushing back hard," McCain said. "We predicted this and watched it. It was like watching a train wreck and warning every step of the way that this was happening ... It is a direct result of our failure to leave a residual force behind."

White House Press Secretary Josh Earnest fielded a string of questions at Monday's briefing about the interview. Asked if Obama intended to blame the intelligence community, Earnest said: "He did not."

He acknowledged Obama "is the one that is ultimately responsible for protecting the national security interests of the United States of America." He added: "There's no question that he relies on important advice from the leaders in our military, from leaders in our diplomatic corps, and from leaders in our intelligence [community]."

In discussing Iraq, Obama told "60 Minutes" that the U.S. left the country after the war with "a democracy that was intact, a military that was well-equipped and the ability then (for Iraqis) to chart their own course."

However, Prime Minister Nouri al-Maliki "squandered" that opportunity over roughly five years because he was "much more interested in consolidating his Shia base and very suspicious of the Sunnis and the Kurds, who make up the other two thirds of the country," the president said.

He also said ISIS regrouped under the cover of the Syrian civil war.

"During the chaos of the Syrian civil war, where essentially you have huge swaths of the country that are completely ungoverned, they were able to reconstitute themselves and take advantage of that chaos," Obama said.

He also said it was "absolutely true" that the U.S. overestimated the ability and will of the Iraqi army.

However, Obama also acknowledged that the U.S. is dealing with a conundrum in Syria, as the U.S.-led military campaign against the Islamic State is helping Syrian President Bashar Assad, whom the U.N. has accused of war crimes.

"I recognize the contradiction in a contradictory land and a contradictory circumstance," Obama said. "We are not going to stabilize Syria under the rule of Assad," whose government has committed "terrible atrocities."

However, Obama called the threat from the Islamic State and other terror groups a more "immediate concern that has to be dealt with."

The Islamic State group, also known as ISIS or ISIL, has taken control of large sections of Iraq and Syria. The Khorasan Group is a cell of militants that the U.S. says is plotting attacks against the West in cooperation with the Nusra front, Syria's Al Qaeda affiliate.

Both groups have been targeted by U.S. airstrikes in recent days; together they constitute the most significant military opposition to Assad.