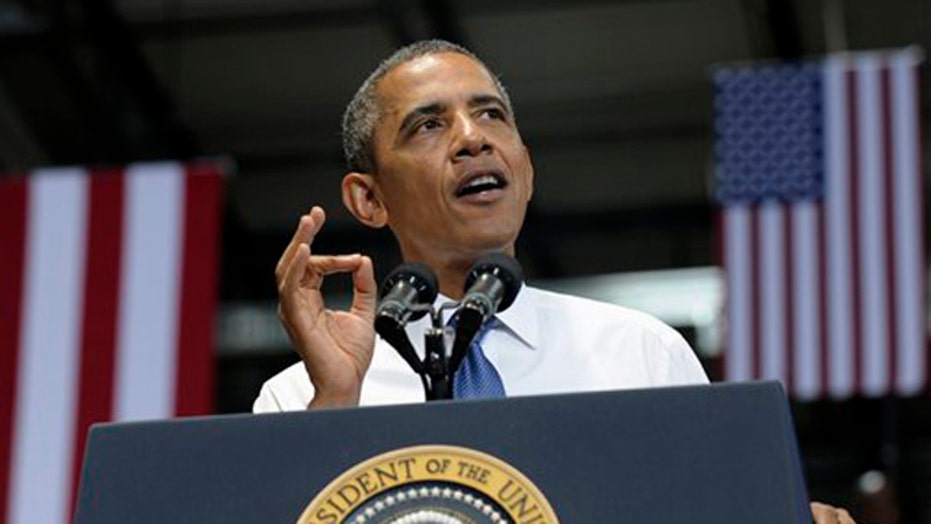 President Obama doubled down Tuesday on his claim that the Keystone XL oil pipeline would create just a handful of jobs, despite being hammered by Republicans and fact-checkers alike for the claim.

The president addressed Keystone during a speech in Chattanooga, Tenn., as he challenged Republicans to come up with new jobs proposals.

"They keep on talking about this -- an oil pipeline coming down from Canada that's estimated to create about 50 permanent jobs. That's not a jobs plan," Obama said.

In citing the 50-jobs number, though, the president was using the smallest possible number attached to the pipeline project. The estimate he used likely refers to a State Department finding that -- after the pipeline is built -- it would take roughly 50 people to maintain it.

But the comment ignores the rest of the State Department report that estimates the project would create nearly 4,000 annual construction jobs -- and potentially "support" an annual 42,000 jobs.

Obama similarly ignored those findings during an interview he gave recently to The New York Times. In the interview, Obama said the project would create roughly 2,000 construction jobs and maybe 100 additional jobs after that -- calling it a "blip relative to the need."

As FoxNews.com reported on Monday, Obama appeared to eschew the higher job-creation estimate from his own State Department, opting instead to use the numbers from a 2011 Cornell University Global Labor Institute study, which opposes construction of the crude-oil pipeline.

A Washington Post fact-check column on Tuesday questioned why the administration would ignore its own numbers.

"Ordinarily, we would expect the president to cite an estimate from his own State Department, rather than a think tank opposed to the project," The Post story said.

The paper acknowledged that much of the estimating is "guess work" that includes speculation about such "spinoff" jobs as suppliers.

"But the president shouldn't pick and choose how he cites job-creation numbers. Perhaps he is tipping his hand on what he secretly thinks of the Keystone XL by citing a low-ball figure, generated by the pipeline's opponents, but he should stick to using the official government estimate," the fact-check column concluded.

The Post suggests that Obama should perhaps estimate the job-creation numbers just as he did when touting his stimulus plan. The column gave the president's claim two "Pinocchios" -- out of four on the paper's fact-check scale.

Republicans were more critical of the claim.

"A president disparaging private-sector jobs while backstage at a jobs rally is beyond belief," Michigan Republican Rep. Fred Upton, chairman of the House Energy and Commerce Committee, told FoxNews.com. "The president's own State Department reported that Keystone would support upwards of 40,000 jobs. In this economy, any source of private job creation should be welcomed with open arms. After nearly five years and 15,500 pages of review, there is no reason to delay these jobs another day. Republicans, Democrats, leading unions, and job creators all agree, it's time to start building."

Another fact-check site -- one tied to the industry -- also blasted Obama's original comments. A post on the Oil Sands Fact Check blog cited the State Department's total estimates and wrote: "Um ... that's a little more than a blip. President Obama also could have consulted the many labor union members across the country who need those jobs and have held rallies in support of Keystone XL across the nation."