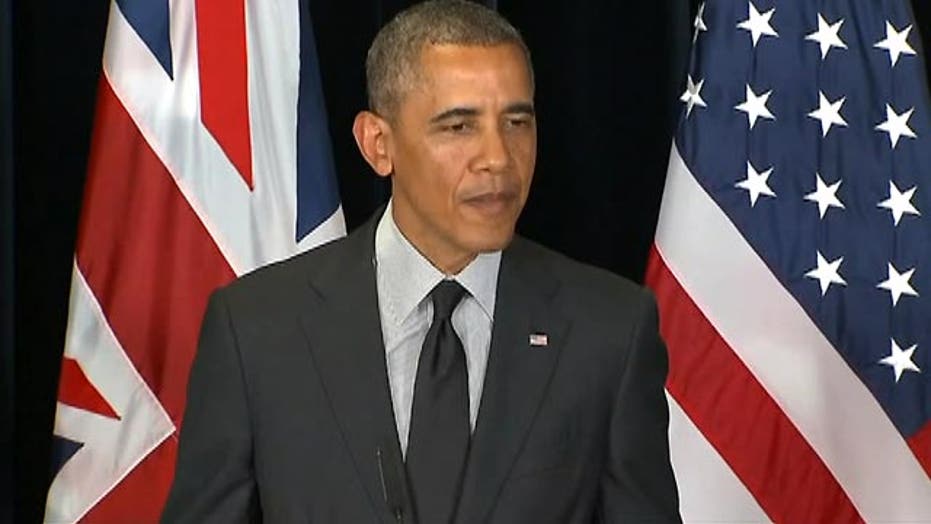 Did Obama imply the Bergdahl uproar is a 'phony scandal'?

President said he wasn't surprised by controversies 'whipped up in Washington,' but the potential danger of the released in Bergdahl prisoner swap - and the soldiers who died searching for the POW - are real

President Obama, facing rising bipartisan criticism over his handling of the Taliban-for-Bergdahl prisoner swap, dug in his heels Thursday and declared he would make "absolutely no apologies" for bringing an American soldier home -- as his administration stepped up its defense of the controversial deal.

The president fielded a question on the Sgt. Bowe Bergdahl controversy during a press conference on Thursday in Brussels, Belgium, alongside British Prime Minister David Cameron. Amid signals that the administration plans to aggressively challenge critics of the deal, the president brushed off the pushback as business as usual in Washington.

"I'm never surprised by controversies that are whipped up in Washington. That's par for the course," Obama said.

He reiterated that he was adhering to a principle that America does not leave soldiers behind.

"We had a prisoner of war whose health had deteriorated and we were deeply concerned about -- and we saw an opportunity and we seized it," he said. "And I make no apologies for that."

The comments come as those close to the negotiation process privately fume over the media firestorm that has ensued. Senior U.S. officials briefed by negotiators, in defending the controversial exchange of five high-value Taliban leaders for Bergdahl, told Fox News there are many points about the deal that need clarification.

They are trying to better explain the trade, after a briefing with senators Wednesday evening ended with lawmakers continuing to complain to the media that they had been kept in the dark.

"The White House played this so close to the vest intentionally and made a determination not to give Congress notice," Sen. Saxby Chambliss, R-Ga., told Fox News.

Officials, though, say Congress was briefed in the past on this possible exchange, so any outrage from Capitol Hill that suggests they were kept completely out of the loop is disingenuous. "This was not a new deal," one official said, claiming it was essentially the same deal that was briefed to Congress in 2011 and early 2012.

However, these officials do not dispute the fact that Congress was denied a 30-day notification before releasing Guantanamo detainees. They felt more or less that congressional notification could jeopardize the unexpectedly fast-moving negotiations.

Further, a proof-of-life video from late last year that apparently fueled the case for the exchange did not necessarily demonstrate he had an acute physical illness (aside from poor nourishment). Rather, those who have seen the video described it as "disturbing" and evidence that his mental state was degenerating to a point of serious concern. For instance, he was having trouble remembering his own name.

Some of the toughest criticism in the last few days has been directed toward Bergdahl himself, amid allegations that he deliberately left his post -- putting the lives of other soldiers at risk as they went looking for him. The negotiators involved in this process say they were well aware of the circumstances in which Bergdahl disappeared. They knew about the reports that he walked off base on his own in 2009. There is a feeling among those who have worked for years on this deal that the criticism of Bergdahl's motives and his family is "reprehensible."

"No one knows what happened that night, and it didn't matter," one official close to the negotiation said. No matter his motives, the officials stressed, the Taliban treated him like a member of the U.S. military.

Officials also say no money exchanged hands as a part of this deal, as some have speculated.

Officials acknowledge the deal was by no means perfect. Those close to the negotiations say there was never any doubt that the men being released were "bad people." The question was always about whether they would pose a direct threat to the U.S. and if their return to the fight would have any dramatic effect on the Taliban's strategy in the future. The conclusion among negotiators was essentially that these men would not pose much more of a threat to U.S. national security than current Taliban leadership.

Finally, those close to the negotiations say: "There was no other viable option" to secure his release.

It's unclear whether the clarifications will do anything to calm the storm of controversy from lawmakers on both sides of the aisle. One went so far as to threaten impeachment if Obama uses this as an opening to shutter Guantanamo.

"If [President Obama] just tried to empty that jail, people would be calling for his impeachment," Sen. Lindsey Graham, R-S.C., said.

The trade has stirred up concerns on several fronts. Lawmakers are angry that the administration went ahead with the deal without giving Congress a 30-day notice, as required by law. Mostly, they're worried that the five Taliban leaders freed from Guantanamo Bay will return to the battlefield.

Sen. Mark Kirk, R-Ill., said when asked if the officials thought the five released Gitmo prisoners would attack Americans, they said they did not know.

"But there will be hell to pay if we find they go on to kill Americans," Kirk said.

Obama and top officials in his administration are, in part, citing Bergdahl's deteriorating health for the decision to move forward with the trade.

This explanation, too, has divided lawmakers. Officials showed members of Congress the proof-of-life video of Bergdahl, which the Taliban had provided, in the Wednesday briefing.

Some lawmakers agreed with the administration that Bergdahl's health was noticeably worse. Democratic Sen. Dick Durbin said "he looked either drugged or sick or tired."

Others, though, have said they did not find the video compelling enough to support the administration's actions.