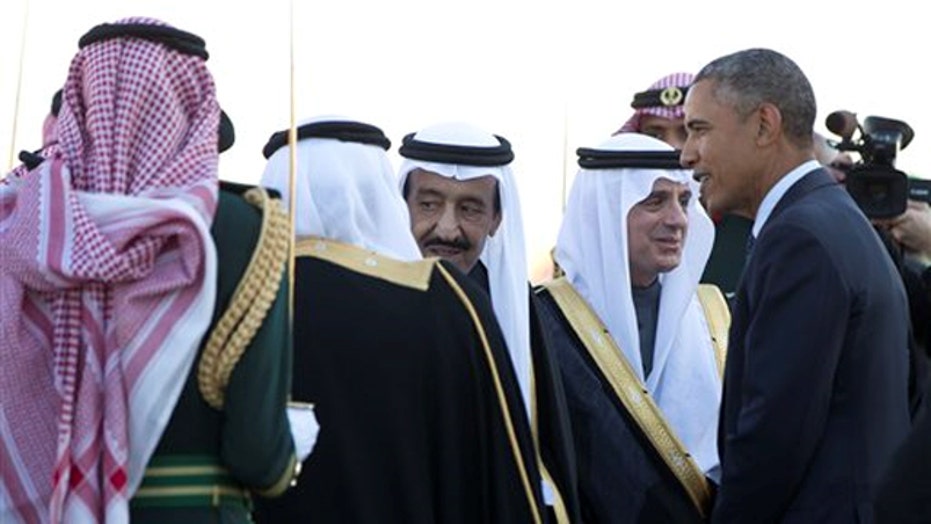 Obama arrives in Saudi Arabia to meet with new ruler

Saudi Arabia's status as one of Washington's most important Arab allies has at times appeared to trump U.S. concerns about the terrorist funding that flows from the kingdom and about human rights abuses. But Obama said he has found it most effective to apply steady pressure over human rights "even as we are getting business done that needs to get done."

"Sometimes we need to balance our need to speak to them about human rights issues with immediate concerns we have in terms of counterterrorism or dealing with regional stability," Obama said in a CNN interview in advance of his arrival.

King Salman bin Abdul-Aziz Al Saud Salman formally greeted Obama and the U.S. delegation at the Erga Palace on the outskirts of Riyadh, where dozens of Saudi officials filed through a marble-walled room to greet the Americans under massive crystal chandeliers. After a three-course dinner of grilled meats, baked lobster and Arabic and French deserts, Obama and Salman sat down for their first formal meeting without making any comments to reporters covering the visit.

Ahead of his arrival, Obama suggested that he would not be raising U.S. concerns about Saudi Arabia's flogging of blogger Raif Badawi, who was convicted of insulting Islam and sentenced to 10 years in prison and 1,000 lashes.

His first flogging took place in early January in front of dozens of people in the Red Sea city of Jiddah, though a second round has been postponed after a doctor said his wounds from the first lashes had not yet healed.

"On this visit, obviously a lot of this is just paying respects to King Abdullah, who in his own fashion presented some modest reform efforts within the kingdom," Obama said.

Stepping off the plane earlier in Riyadh, the president and first lady Michelle Obama were greeted by Salman and a military band playing both countries' national anthems. Some of the all-male Saudi delegation shook hands with Mrs. Obama while others gave her a nod as they passed by. Mrs. Obama wore full-length clothing but no headscarf, as is typical for many Western women in Saudi Arabia, despite the strict dress code for Saudi women appearing in public.

Obama cut short the final day of his trip to India to make the four-hour stop in Riyadh. Further underscoring the key role Saudi Arabia has long played in U.S. foreign policy in the Middle East was the extensive delegation that joined Obama for the visit.

"It meets the threshold of being bipartisan, high-level and people who worked very closely with Saudi Arabia over many years," said Ben Rhodes, Obama's deputy national security adviser.

Despite vast differences of opinions on many issues, the U.S. and Saudi Arabia have worked in close coordination to address evolving security concerns in the tumultuous region. Most recently, Saudi Arabia became one of a handful of Arab nations that have joined the U.S. in launching airstrikes against the Islamic State group in Iraq and Syria.

In his initial days on the throne, the 79-year-old Salman has given little indication that he plans to bring fundamental changes to his country's policies. He's vowed to hew to "the correct policies which Saudi Arabia has followed since its establishment."

Obama acknowledged that the U.S. willingness to pursue close ties with Saudi Arabia despite human rights abuses often leaves America's allies feeling frustrated and uncomfortable. But he said he would keep making the case to partners like Saudi Arabia "that if they want a society that is able to sustain itself in this day and age, then they're going to have to change how they do business."

Obama's presidency has also been marked by occasional strains with the Saudi royal family. Abdullah, the 90-year-old monarch who died Friday, had pressed the U.S. to take more aggressive action to force Syrian President Bashar Assad from power. The royal family is also deeply skeptical of Obama's diplomacy with rival Iran.