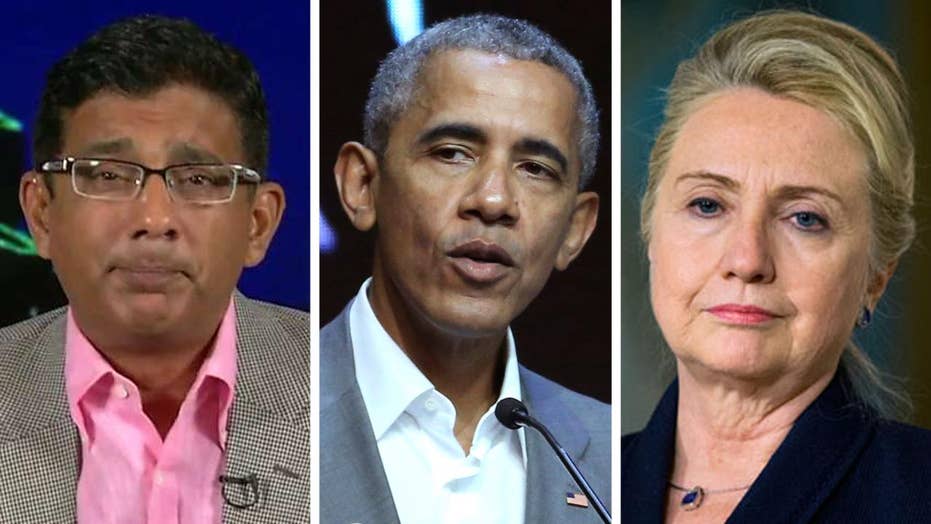 As Democrats move to regroup after last year's bruising election, the party's biggest heavyweights – former President Barack Obama and former Secretary of State Hillary Clinton – have made clear they're not going anywhere.

The former commander-in-chief was returning to the political fray Thursday evening, headlining a private fundraiser for the National Democratic Redistricting Committee in Washington, D.C.

The group is led by his former attorney general Eric Holder and aimed at tackling "unfair" gerrymandering.

"Restoring fairness to our democracy by advocating for fairer, more inclusive district maps around the country is a priority for President Obama," Obama spokesman Kevin Lewis said Wednesday.

Before he left the White House, Obama said redistricting would be a top political priority in his post-presidency and admitted he failed to create a “sustaining organization” around the political coalition that twice elected him to office.

But the appearance could signal the latest step in a gradual return to political life, at a time when his party could use the boost.

The GOP raised nearly $10.9 million in May – more than twice the amount collected by Democrats. Not only are Democrats low on cash, they have struggled in a series of congressional special elections this year.

As a private citizen, Obama mostly has worked on causes related to his foundation and future presidential library, avoiding D.C. politics or mentioning President Trump by name. But that could be changing, as he has blasted congressional Republicans’ attempts to repeal and replace his signature health care legislation.

Clinton, too, is returning to the spotlight by launching a PAC aimed at helping congressional Democratic candidates in the upcoming midterms.

Former California Rep. Ellen Tauscher and aide Kate Merrill also have started a super PAC focused on seven districts in the Golden State that voted for Clinton but ended up voting for a GOP candidate in the House.

Some, though, have questioned whether the two-time failed presidential candidate, who recently slammed the DNC, should have such a starring role.

In May, the former Democratic presidential nominee directed criticism at the DNC and said she inherited “nothing from the Democratic Party.”

“It was bankrupt, it was on the verge of insolvency, its data was mediocre to poor, non-existent, wrong. I had to inject money into it – the DNC – to keep it going,” Clinton said during a question and answer session at Recode’s Code Conference in California.

Democrats, it seems, are still mapping out a game plan for 2018.

The party suffered losses in several House special elections this year, reigniting the debate as to whether the current leaders have what it takes to put Democrats back in power.

Particularly painful was Jon Ossoff’s 3-percentage-point loss in Georgia’s 6th Congressional District. More than $23 million was raised across the country in the contest that was billed as a referendum on Trump.

Following the Georgia fail, House Minority Leader Nancy Pelosi, D-Calif., faced renewed calls from party colleagues for her removal from leadership. She also had been linked to Ossoff in multiple Republican ads in the race. But Pelosi continues to hold on, as Clinton and Obama return to the political stage.

Garry Mauro, a strategist who led former President Bill Clinton’s 1992 campaign effort in Texas, told The Daily Caller that while Hillary Clinton would be “well received,” it would be ill-advised for her to play “the dominant role.”

“We’re not going to win these races because Barack Obama, Michelle Obama, Hillary Clinton or Nancy Pelosi comes to the state and campaigns,” he said. “We’re going to win it because we represent new leadership and new ideas.”

Rep. Seth Moulton, Democrat of Massachusetts, agrees. Moulton has been one of many who have been calling for new leadership.

“We're at the worst electoral position that the Democratic Party has been in in decades,” he said in an NPR interview. “And so when you keep losing like that, you can't keep doing the same old thing”.

One up-and-comer is California Sen. Kamala Harris, whose national presence got a boost after Obama told a group of Democrats in 2013 that in addition to being “brilliant” and “tough,” Harris was “by far, the best-looking attorney general in the country.”

Since then, Harris, in her freshman term, has been dogged in her criticism of the Trump administration. She has voted against 18 of Trump’s nominees and has been described as fearless.

But pinning the hopes of the Democratic Party on her shoulders might be a bit premature.

“She just got here,” Sen. Dianne Feinstein of California, said when asked about Harris’ political future as a national figure. “What she should do is concentrate on being a good, and possibly a great, United States senator. The rest will either happen or not happen.”