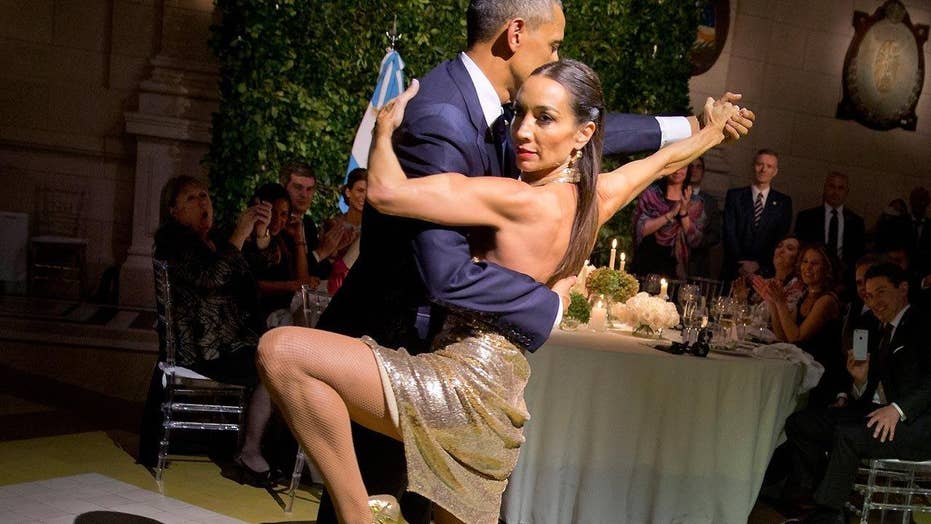 First, he caught heat for doing the wave alongside Cuba's dictator — while the rest of the world was watching images of ISIS carnage in Brussels. Now, new images of President Obama doing the tango – albeit a bit awkwardly – in Buenos Aires are further fueling an “optics” problem as he defends the decision to go on with the diplomatic program in Latin America despite this week’s horrific events in Belgium.

Even Richard Haass, the president of the Council on Foreign Relations, said Thursday that the dance number in Argentina was a bad move.

“The advance person who let him do the tango, that person ought to be looking for work on somebody’s … campaign very, very far away,” Haass told MSNBC. “That was a tremendous mistake.”

He disagreed with critics who say Obama should have canceled his trip after Tuesday’s attacks, but said scenes like the U.S.-Cuba baseball game and now him dancing the tango don’t fit with the seriousness of the moment.

Obama was pulled into dancing the tango during the state dinner he and first lady Michelle Obama attended in Buenos Aires Wednesday night.

Obama initially resisted when the female dancer approached and tried to get him to join her on the dance floor. The U.S. president eventually relented, as the first lady, too, partnered with a male dancer on the floor.

Obama already had faced criticism for continuing his schedule of events in Cuba after the Belgium attacks. Republican presidential candidate John Kasich said Obama should have returned home.

“This is an attack on the heart of Europe, and the idea that we’re just going to be kind of clever here and not try to draw attention I think is a big mistake,” the Ohio governor told Fox News on Tuesday. “If I were president, I would have come home.”

But Obama on Wednesday defended his approach, while insisting that taking out the Islamic State, which claimed responsibility for the attacks, is his “top priority.”

The president said he understands the fear caused by scenes like the massacre at the Brussels airport and subway, where at least 31 were killed and hundreds were injured. He said “it horrifies me” as well. But he defended his handling of the aftermath by once again arguing that ISIS should not be allowed to disrupt Americans’ lives -- including his own.

“Their primary power, in addition to killing innocent lives, is to strike fear in our societies, to disrupt our societies, so that the effect cascades from an explosion or an attack by a semi-automatic rifle,” he said. “And even as we are systematic and ruthless and focused in going after them -- disrupting their networks, getting their leaders, rolling up their operations -- it is very important for us to not respond with fear.”