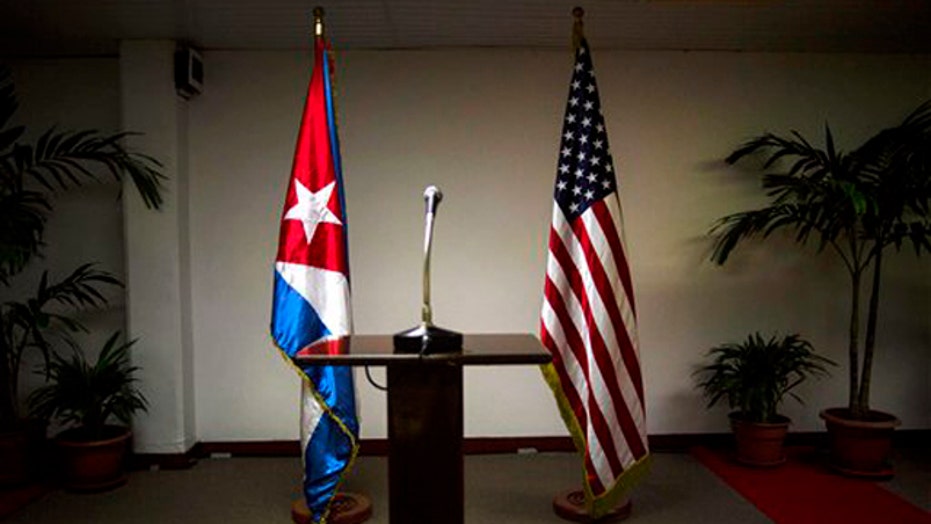 President Obama and Cuba's Raul Castro spoke by phone ahead of a regional summit in Panama where the two are likely to interact, a White House official said.

The official told Fox News that Obama and Castro spoke by phone on Wednesday, before Obama left Washington, D.C.

Both leaders are in Panama City for the Summit of the Americas. It's only the second-known conversation between the leaders of the U.S. and Cuba in more than 50 years; the first was in December, shortly before Obama and Castro announced plans to restore diplomatic ties. While the two aren't scheduled to meet formally while in Panama, they are expected to interact on the sidelines.

Meanwhile, U.S. Secretary of State John Kerry met his Cuban counterpart in Panama late Thursday in the highest-level discussion between representatives of Washington and Havana in more than 50 years.

Reuters reported that the meeting in the restaurant of a Panama City hotel lasted for at least two hours, with Kerry occasionally gesticulating toward Rodriguez.

This year marks Cuba's first appearance at the Summit of the Americas, which have been seven times since 1994.

In December, Obama and Castro announced their intention to restore diplomatic relations, beginning a painstaking process that has brought to the surface difficult issues that have long fed in to the U.S.-Cuban estrangement. Hopes of reopening embassies in Havana and Washington before the summit failed to materialize. The U.S. is still pushing Cuba to allow more freedom of movement for its diplomats, while Cuba wants relief from a sanctions regime that only Congress can fully lift.

Most controversially, some White House officials have indicated that the State Department is poised to recommend that Cuba be removed from its list of state sponsors of terrorism. Cuba has been on the list since 1982.

While in Jamaica on Wednesday, Obama signaled that he will soon act to remove Cuba from the list, a move that could come within days.

"We don't want to be imprisoned by the past," Obama said in Kingston, before flying to Panama City. "When something doesn't work for 50 years, you don't just keep on doing it. You try something new."

Fox News' Kimberly Schwandt and The Associated Press contributed to this report.