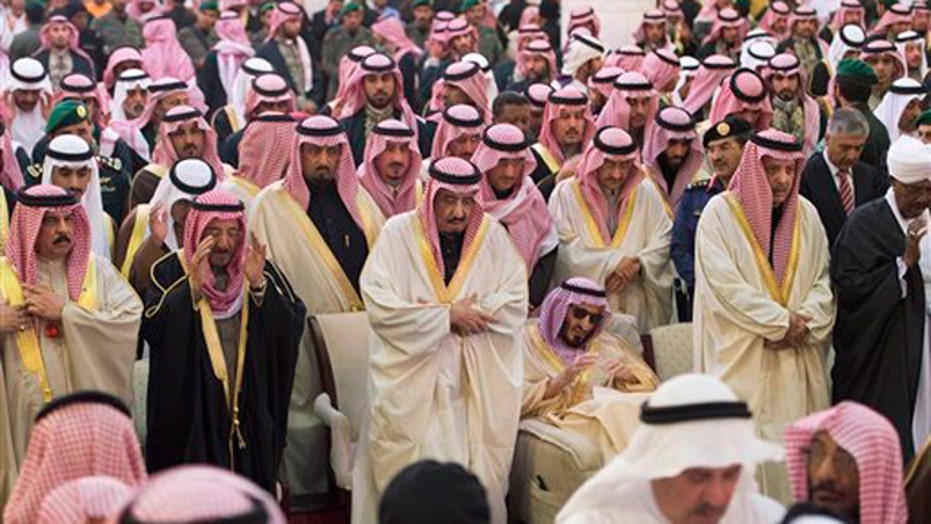 Reaction from Robert Jordan, former US ambassador to Saudi Arabia

President Obama has cancelled the end of his trip to India to fly to Saudi Arabia in the wake of the death of the country's king and growing instability in the region, U.S. and Indian officials said Saturday.

The officials said Obama will fly from India Tuesday, skipping a planned trip to the Taj Mahal.

White House spokesman Josh Earnest said the president and first lady Michelle Obama would travel to Riyadh on Tuesday to pay respects after the death of King Abdullah.

Obama was due to arrive in New Delhi Sunday for talks with Prime Minister Narendra Modi and to be the chief guest in India's Republic Day parade Monday. Obama had been scheduled to return to Washington late Tuesday

Obama's travel schedule was changed so that he could meet with the new king and other Saudi officials after his speech in India Tuesday. Vice President Joe Biden will stay in Washington.

Saudi Arabia has long been a key U.S. ally, and a bulwark against Iran’s reach. Given the line of succession – King Abdullah's half-brother Salman bin Abdul-Aziz Al Saud has replaced him – the former diplomat did not expect major policy changes in the short-term.

Indeed, Salman said in a speech that aired on the state-run Saudi television that the country will adhere to the same policies it has followed "since its establishment."

Salman made an oblique reference to the chaos gripping the greater Middle East as the extremist Islamic State group now holds a third of both Iraq and Syria.

"The Arab and the Islamic nations are in dire need of solidarity and cohesion," he said.

A former U.S. diplomat told Fox News that the Saudi policy on matters like Yemen has not been clear since 2009, and the diplomat even anticipated a softer stance from the Kingdom on Syria, where the late king committed Saudi airpower to fighting the Islamic State.

Abdullah's death may also open up a bigger power vacuum in Riyadh than first believed. The Wall Street Journal reported that U.S. officials do not consider the 79-year-old Salman to be a strong or healthy ruler in his own right, which raises the possibility that others in the royal family could come to the forefront.

The White House had originally said the vice president would lead a delegation to Saudi Arabia. However, it was determined that the window when Biden would be on the ground in Riyadh coincided with Obama's departure from India.

Obama, in the meantime, will be the first U.S. president to visit India twice while in office; he also traveled there in 2010 for an economic summit.

The president's visit is expected to be heavy on symbolism and lighter on substantive advances, though climate change, economics and defense ties are all on the agenda. Indian political commentator Ashok Malik said expectations for concrete deliverables during the visit are "below the standards usually set by U.S. presidents when they travel across the world for a three-day visit."

Still, U.S. and Indian officials appear to agree that even a symbolic show of solidarity between the leaders would be a sign of progress after recent difficulties.

While military cooperation and U.S. defense sales have grown, Washington has been frustrated by India's failure to open up to more foreign investment and to address complaints alleging intellectual property violations. India's liability legislation has also prevented U.S. companies from capitalizing on a landmark civil nuclear agreement between the two countries in 2008.

U.S. officials hope the improving relationship between Obama and Modi will payoff in the policy arena. The White House plans to push India on climate change.