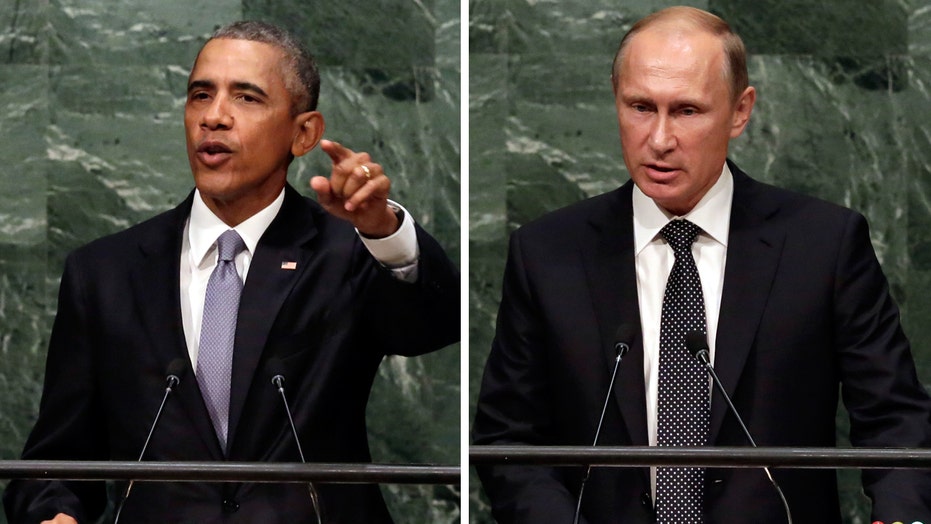 What do Obama and Putin have to gain from meeting?

Amb. John Bolton weighs in on talks at U.N. over Syria crisis

President Obama used a United Nations address Monday to both appeal for global cooperation in dealing with terrorism and other threats -- and stake out his negotiating position on Syria ahead of a high-stakes meeting with Russia's Vladimir Putin.

Speaking to the U.N. General Assembly in New York City, Obama warned of "dangerous currents" that threaten the modern world. He cited "brutal networks of terror" that have filled the vacuum in fragile states and stirred a refugee crisis on an "epic scale."

But he also urged nations against imposing order "by force."

"If we cannot work together collectively, we will all suffer the consequences," Obama said.

Portion of the address, and that message, appeared to be aimed at Russia, to which Obama made several specific references. He said the U.S. is "prepared to work" with Russia and Iran to resolve the bloody Syrian civil war.

But, in a clear reference to Putin's support for the regime in Damascus, Obama said the world cannot see a "return to the pre-war status quo" in Syria.

Without elaborating, Obama said "compromise" will be required to end the fighting in Syria and stomp out the Islamic State. But he said there must be a "transition" away from Assad.

Putin, though, used his own address to voice support for the Syrian government and say only Assad is fighting against terrorists. He also decried Western intervention in the region. The conflicting messages could make for a tense meeting later in the day, when Obama and Putin plan to speak on the sidelines of the annual gathering of world leaders.

It will be their first face-to-face meeting in nearly a year.

The U.S. and Russia have quibbled over who requested the meeting and what the focus will be. Putin wants to talk about Syria; Obama wants to concentrate on Ukraine. Despite administration efforts to turn Putin into an international pariah after Russia annexed the Crimean Peninsula from Ukraine in March 2014, Obama believes not engaging with the Russian leader "would be wrong" given the pressing issues in Ukraine and Syria, Obama deputy national security adviser Ben Rhodes said.

Putin has begun a military buildup in ally Syria for reasons that U.S. officials have said remain unclear.

In his address, Obama broadly defended his approach to foreign policy, and pointed to recent developments spearheaded by his administration.

He arrives at the U.N. after securing some major foreign policy achievements, including a nuclear deal with Iran and a diplomatic normalization with Cuba. Obama touted both those agreements on Monday.

Iranian President Hassan Rouhani, in his address, cast the nuclear talks as a product of the U.S. being "forced" to set aside sanctions and negotiate. Still, he called the agreement a "brilliant example of victory over war."

But overshadowing the still-controversial agreements with Iran and Cuba are worsening conflicts across the Middle East and the rising influence of Russia in places like Syria and Ukraine.

Obama on Monday urged the world to choose "cooperation over conflict."

"That is not weakness, that is strength," he said.

He also acknowledged that, in Libya, the international force "should have done more" to fill the vacuum left behind after Muammar Qaddafi was deposed.

"We must work more effectively in the future as an international community to build capacity for states that are in distress before they collapse," Obama said.

Despite progress on the Iran nuclear front, Obama remains challenged elsewhere in the Middle East.

A campaign against Islamic State militants who have claimed broad sections of Iraq and Syria remains far from achieving Obama's goal to "degrade and ultimately destroy" the group, despite more than a year of military airstrikes against ISIS targets by a U.S.-led coalition of more than 60 countries.

A separate U.S. effort to train thousands of moderate Syrian rebels to fight ISIS has turned out to be a costly failure, with fewer rebels than originally anticipated involved.