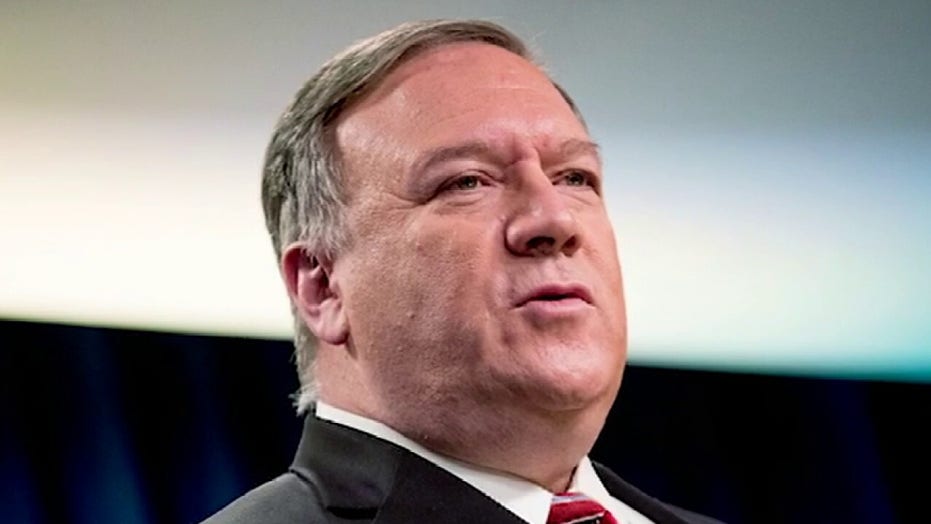 Pompeo says IG was 'trying to undermine' what they were trying to do; chief White House correspondent John Roberts reports.

Joe Biden recently admitted that he didn't "recall" the Obama administration's conspicuous 2009 firing of a prominent inspector general, even as he sought to slam President Trump for terminating the State Department's internal watchdog amid a probe of whether Secretary of State Mike Pompeo ordered staffers do the dishes, walk the dog and obtain dry cleaning.

The awkward moment, which came during a Yahoo News virtual town hall last Tuesday, highlighted a problem for the Biden campaign and others hammering away at Trump's IG firings. While those decisions have been controversial enough to raise concerns from even the Republican side of the aisle, the Obama administration in which Biden served has its own complicated record of ousting and tangling with the government watchdogs.

However, the Obama administration terminated several inspectors general, and the circumstances drew ample criticism at the time.

Gerald Walpin was appointed by President George W. Bush as the IG for the Corporation for National and Community Service, the federal agency overseeing AmeriCorps and other initiatives. The Wall Street Journal reported that in April 2008, Walpin was tasked with investigating "reports of irregularities at St. HOPE, a California nonprofit run by former NBA star and Obama supporter Kevin Johnson."

Specifically, St. HOPE obtained an $850,000 AmeriCorps grant intended to help tutor local students, redevelop some buildings, and enhance "theater and art programs." Walpin's team, however, discovered that the money "had been used instead to pad staff salaries, meddle politically in a school-board election, and have AmeriCorps members perform personal services for Mr. Johnson, including washing his car," the Journal reported.

Walpin, along with a career oversight official, determined that Johnson – as well as St. HOPE and one of Johnson's assistants – should be "suspended" from receiving taxpayer dollars. Walpin also made a referral to federal prosecutors. When Johnson was elected mayor of Sacramento, the suspension threatened to block the city's access to stimulus dollars from the Obama administration.

An Obama-appointed U.S. attorney, Lawrence Brown, then took the lead and settled the matter with Johnson, essentially cutting Walpin out of the loop. St. HOPE ultimately had to repay approximately $400,000, and Johnson himself was cleared. Walpin said he was then told by Norman Eisen, a special counsel to Obama on matters of ethics and government reform, that he had to "move on."

Eisen publicly complained that Walpin was "confused and disoriented" at an agency board meeting, had issues with honesty and "engaged in other troubling and inappropriate conduct."

“I can only say that I became a thorn in the side of someone, because I was doing my job,” Walpin told Beck.

Eisen and White House Counsel Greg Craig would later say that Brown had lodged a complaint against Walpin for misconduct in the Johnson probe, including for allegedly withholding exculpatory information. Given that Brown had settled with Johnson and St. HOPE – including by requiring that they repay half of the funds they received – the Journal called Craig's position "curious," and apparently little more than a pretext for firing Walpin.

Indeed, in late 2009, Walpin was cleared by federal investigators of any wrongdoing in the Johnson probe.

"Mr. Brown alleged you hindered his office's investigation of the underlying matters and disregarded Department of Justice policy and his warnings about dealing with such matters in the press," Integrity Committee chairman Kevin Perkins wrote to Walpin. "After carefully considering the allegations described in the complaint together with your response, the [Integrity Committee] determined that the response sufficiently and satisfactorily addressed the matter and that further investigation was not warranted."

The termination drew criticism from Sen. Claire McCaskill, D-Missouri, an Obama backer, as well as several Republicans. As a senator, Obama had recently co-sponsored the "Inspectors General Reform Act," which required presidents to provide 30 days' notice and a valid reason before firing an inspector general.

“The White House has failed to follow the proper procedure in notifying Congress as to the removal of the Inspector General for the Corporation for National and Community Service," McCaskill said. "The legislation which was passed last year requires that the president give a reason for the removal. ‘Loss of confidence’ is not a sufficient reason. I’m hopeful the White House will provide a more substantive rationale, in writing, as quickly as possible."

A congressional probe, conducted by the Senate Finance Committee and House Oversight Committee, later characterized Johnson as a "prominent fundraiser with disproportionate access to the White House." The congressional investigators criticized Eisen for failing to conduct a "thorough and deliberate" probe of Walpin's activities, and instead only questioning those with a vested interest in securing Walpin's ouster.

A court would later throw out Walpin's effort to sue for reinstatement, saying the Inspector General Reform Act didn't allow that remedy: "Walpin has not identified any text in the IGRA which explicitly creates a cause of action for an aggrieved Inspector General, nor has he presented any authority demonstrating that Congress drafted the IGRA with the intent to give individual Inspectors General an enforceable right to continued employment. ... While Walpin complains that the President’s rationale was insufficient, Walpin fails to show how the IGRA provides any sort of criteria that would allow a court to make that determination."

The Obama administration, however, also saw the departures of other IGs under conspicuous circumstances. "There has been a series of departures of inspectors general this year, prompting critics to charge that agencies are trying to quash criticism from the officials who are supposed to be their own in-house watchdogs," Politico reported in 2009.

And the State Department went without a permanent inspector general for more than four years in the Obama administration, though the Washington Post reported that the agency's acting inspector general still conducted some probes.

"In the job, he has doubled the department’s staff and carried out key investigations," the Post's editorial board wrote, referring to the acting inspector general of the State Department. "But fully instated inspectors general are far preferable to their acting counterparts, both substantively and symbolically."

TRUMP RIPS INTO INTEL IG: A 'DISGRACE' TO IGs?

Meanwhile, Fred Weiderhold was ousted as Amtrak's inspector general in 2009 — but only after receiving $310,000 in a severance payment that severely restricted his ability to say anything negative about the agency.

Weiderhold had reportedly found that Amtrak was mismanaging funds, including some $100 million in legal fees from 2002 to 2005. He stepped down, the Journal noted, "around the time a report he commissioned concluded that the ‘independence and effectiveness’ of the inspector general's office was ‘being substantially impaired’ by Amtrak managers."

“The public’s business ought to be public, but it has taken over a month of digging for Congress to get to the truth about Amtrak firing its inspector general,” Iowa GOP Sen. Chuck Grassley said. “It makes you wonder what Amtrak wanted to hide by trying to muzzle its former watchdog.”

Grassley also sounded the alarm about the Obama administration's firing of the International Trade Commission's Acting Inspector General Judith Gwynn, who was kept on six-month contracts and finally terminated amid allegations someone was forcibly stealing files from her office.

“I am unaware of any other agency Inspector General that serves under such a constraint and am curious to learn what statutory authority gives the USITC the ability to make a limited term appointment,” Grassley wrote at the time.

Additionally, the Obama administration was criticized for stonewalling inspectors general in various contexts. ABC News reported in 2010, for example, that the Obama administration was "trying to prevent a bailout watchdog from overseeing an upcoming program to boost lending to small businesses," according to a letter sent by Neil Barofsky, the special inspector general for the $700 billion Wall Street bailout (SIGTARP).

"SIGTARP has been an aggressive watchdog for American taxpayers and this attempt to circumvent their oversight must not go forward," said then-California GOP Rep. Darrell Issa. "It is disturbing, but not altogether out of character, that this Treasury Department would attempt to deny SIGTARP the ability to conduct oversight of this proposed program."

And, in 2010, Patrick McFarland, inspector general for the Office of Personnel Management, said a staffer with the White House's Office of Management and Budget (OMB) warned that the budget office would "make life miserable" for the inspector general if his office formally complained about its fiscal 2011 budget.

McFarland said in a letter to the House Oversight and Government Reform Committee that an OPM colleague interpreted this as a "not so veiled threat from OMB."

"Such statements, if made, are entirely improper," wrote Chairman Edolphus Towns, D-N.Y., and Rep. Stephen Lynch, D-Mass., calling the alleged bullying a "direct threat" to the independence of the inspector general.

DOJ inspector general Michael Horowitz also reported that the Obama administration had reinterpreted oversight laws in a manner that affected his probe of Fast and Furious, the gunrunning sting operation linked to the death of a U.S. Border Patrol officer.

"No law changed, no policy changed.… It was simply a decision by the General Counsel’s Office [of the FBI] in 2010 that they [now viewed] the law differently. And as a result, they weren’t going to give us [certain] information," Horowitz said.

The Heritage Foundation noted that "Horowitz was perplexed by this move, since prior to 2010, the 'DOJ never questioned our legal authority to access documents.' No attorney general even exercised the 'national security' exemption, since Horowitz points out that his office was provided with very sensitive intelligence information when the IG investigated 'the Robert Hanssen matter, the Aldrich Ames matter, the September 11 attacks, the post-September 11 surveillance program initiated by President Bush, and the FBI’s use of its authorities under the Patriot Act and the FISA Amendments Act.'"