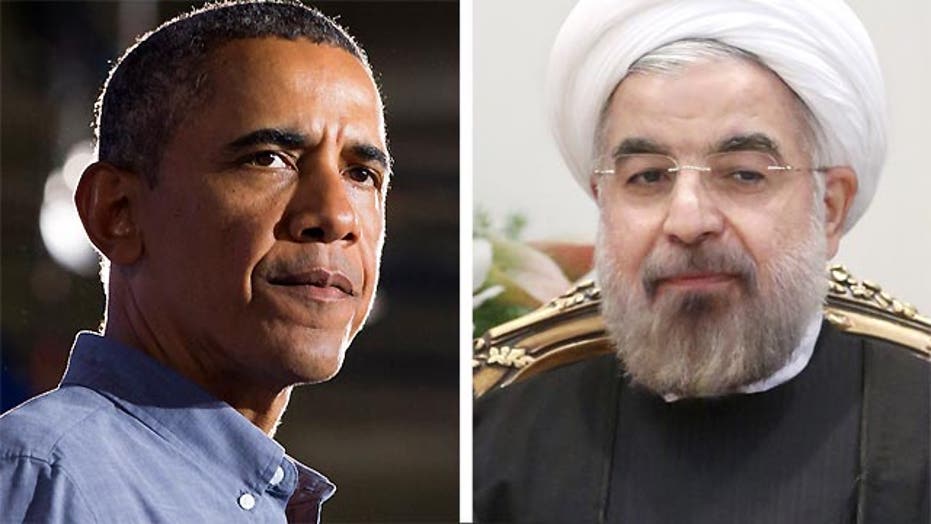 US taking 'my enemy's enemy is my friend' approach to Iraq?

Is the US about to make a deal with frequent foe Iran in attempt to squash militants in Iraq?

The Obama administration, unable to move the needle in the three-year-old Syrian civil war, now finds itself on the verge of moving toward a "my enemy's enemy" foreign policy with Iran in order to keep Iraq from falling apart next door.

The possibility of partnering with Iran to deal with a common foe -- a radical Sunni militant group bent on regional domination -- has immediately divided some of the Obama administration's toughest critics.

Sen. John McCain, R-Ariz., called the idea of an alliance of convenience with Iran the "height of folly."

Sen. Lindsey Graham, R-S.C., who typically is in lockstep with McCain on national security matters, on Sunday, though, likened it to the U.S. aligning with Stalin during World War II, because he "was not as bad as Hitler."

"The Iranians can provide some assets to make sure Baghdad doesn't fall," Graham said.

Meanwhile, the U.S. is positioning Naval vessels in the Persian Gulf to assist in the event of an evacuation. Americans already are being moved out of the U.S. Embassy in Baghdad -- according to a senior U.S. official, about 1,000 U.S. Embassy personnel are slated to be moved to other U.S. consulates in Iraq, as well as to Jordan. That represents one-fifth of the 5,000 personnel at the compound, the largest American embassy in the world. The embassy remains open.

In an interview with Yahoo! News, Kerry said Washington is "open to discussions" with Tehran if the Iranians can help end the violence and take steps that would restore confidence in the Iraqi government. Asked about possible military cooperation with Iran, Kerry said he would "not rule out anything that would be constructive." However, he stressed that any contacts with Iran would move "step-by-step."

"We're open to discussions if there is something constructive that can be contributed by Iran, if Iran is prepared to do something that is going to respect the integrity and sovereignty of Iraq and ability of the government to reform," Kerry said.

His top spokesperson, though, took to Twitter shortly afterward to clarify his statements, and downplay the possibility of military cooperation.

Pentagon Press Secretary Rear Adm. John Kirby also pushed back on any suggestion the U.S. would coordinate militarily with Iran.

The prospect of entering even a tacit alliance with Iran in order to stabilize Iraq raises challenging diplomatic and security questions for the Obama administration, which has struggled to define where America fits into a rapidly changing Middle East.

The U.S., while technically negotiating with Iran over its nuclear program, is presently at odds with Tehran over Iraq's other neighbor.

Two years ago, Obama declared the use of chemical weapons in Syria as a "red line," only to back off that threat a year later when evidence emerged that the Assad regime had used them. In that time, Iran reportedly has dispatched assets to help prop up Bashar Assad, further strengthening his grip on power despite Obama's declarations that Assad must go.

Iran and the U.S. also were on opposing sides of the bloody and protracted Iran-Iraq War three decades ago.

Citing the Syrian war, McCain strongly urged the Obama administration not to partner with Iran this time.

"This is the same Iranian regime that has trained and armed the most dangerous Shia militant groups, that has consistently urged Prime Minister Maliki to pursue a narrow sectarian agenda at the expense of national reconciliation, that supplies the rockets that have been fired at the U.S. Embassy in Baghdad, that has sponsored acts of terrorism throughout the Middle East and the world, and that continues to use Iraq's territory and airspace to send weapons and fighters to prop up Bashar al-Assad in Syria," McCain said in a statement, reminding the president that U.S. and Iranian interests "do not align" and their involvement could make the situation in Iraq worse by inflaming sectarian tensions and driving more Sunni's into the ranks of the Islamic State of Iraq and Syria (ISIS).

He said: "For all of these reasons, and more, the United States should be seeking to minimize greater Iranian involvement in Iraq right now, not encouraging it. That means rapid, decisive U.S. action to degrade ISIS and halt their offensive in Iraq."

Graham spoke Sunday on CNN's "State of the Union."

While the administration weighs its options, it has sent four Naval vessels to the Persian Gulf, to assist in any contingencies, including possible evacuation of Americans.

In addition to possible discussions with Iran, Kerry said the Obama administration is actively considering unilateral airstrikes to slow the ISIS insurgency that is threatening Iraq's government.

"They are not the whole answer, but they may well be one of the options that are important to be able to stem the tide and stop the movement of people who are moving around in open convoys and trucks and terrorizing people," he said. "When you have people murdering, assassinating in these mass massacres, you have to stop that and you do what you need to do if you need to try to stop it from the air or otherwise."

One possible first point of contact with the Iranians could come as early as Monday in Vienna, where senior U.S. officials is meeting with an Iranian delegations as part of unrelated six-nation nuclear talks.

A senior U.S. official in Vienna said there is a possibility that Deputy Secretary of State William Burns, who is leading the U.S. delegation, may discuss Iraq with Iranian diplomats on the sidelines of the nuclear talks.

In addition to a potential channel in Vienna, officials said U.S.-Iran talks could be held in Baghdad, possibly between the two countries' ambassadors to Iraq.