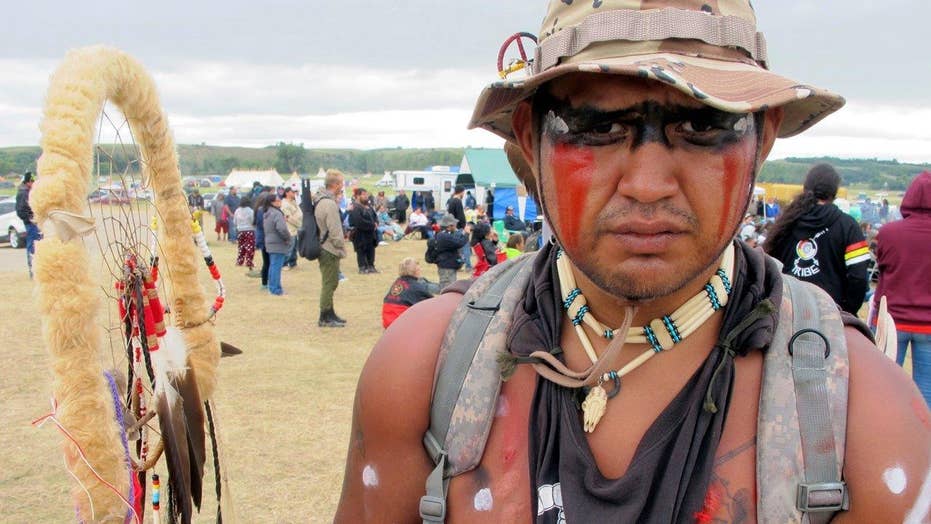 Protesters argue the permitted oil pipeline near an American Indian reservation will impact drinking water for thousands of tribal members; insight from Lauren Donovan, reporter for The Bismarck Tribune

The Obama administration is coming under increasing pressure from lawmakers and oil industry groups to stand down after intervening in yet another pipeline dispute – this time, by temporarily suspending construction on the controversial North Dakota Access Pipeline.

The Standing Rock Sioux Tribe has been fighting the pipeline for two years, arguing it could traverse sacred ground and burial sites and pose health problems. Their bid to block the four-state, 1,172-mile pipeline got a boost Friday from the administration, which temporarily halted the project just minutes after U.S. District Judge James Boasberg ruled against the tribe.

The decision to put on hold the $3.8 billion project set off a firestorm among industry leaders and lawmakers who say the administration has overstepped its authority.

Rep. Kevin Cramer, R-N.D., called the reversal “fundamentally unfair” and said it “does nothing to ensure certainty or calm, but rather adds further confusion.”

“It seems more than a little confusing that moments after a federal judge issued an order stating, among other things, that the Corps of Engineers and the pipeline company did everything the law requires of them and more, the Obama Administration decides to change the rules,” Cramer said in a written statement.

According to court records, the company has changed the route on its own dime -- 140 times alone in North Dakota -- to avoid building over burial sites. Ninety-nine percent of the pipeline route, roughly half of which has been completed, crosses private land.

“The administration’s recent attempts to change the rules, in the middle of the game, set a dangerous precedent for our country that could threaten other infrastructure projects like bridges, roads and electricity transmission,” Gerard told FoxNews.com in a statement.

“We fear that President Obama has now set a dangerous precedent where political considerations can now thwart or delay every single infrastructure project moving forward,” McGarvey told FoxNews.com in a written statement.

The White House has defended its decision and on Wednesday, spokesman Josh Earnest shrugged off comparisons to another major pipeline project the administration recently helped thwart, the Keystone XL Pipeline.

“Keystone was subject of intense debate for a number of years,” he said. “Issues related to that are different than this.”

But Brigham McCown, a former acting administrator for the federal Pipeline and Hazardous Materials Safety Administration, voiced concerns. “This could bog down or delay every single infrastructure project moving forward,” he told The Chicago Tribune. “I don’t think they even realize the can of worms they’ve opened.”

For its part, Energy Transfer Partners, the company behind the project, said it is committed to completing the pipeline and would “obey the rules and trust the process.”

Blueprints for the North Dakota pipeline show construction would stretch from the Bakken Formation – an underground deposit of oil and natural gas where North Dakota and Montana meet Canada – into Iowa, Illinois and South Dakota.

Without a doubt, the untapped potential in Bakken is huge. According to the U.S. Geological Survey, an estimated 7.4 billion barrels of oil could be there. Upon completion, the pipeline could shuttle 470,000 barrels of crude in a 24-hour cycle – enough to produce more than 374 million gallons of gasoline a day.

Proponents say the pipeline would create 8,000 to 12,000 construction jobs and pump an estimated $156 million in sales and income taxes into the economy. The pipeline is projected to generate an estimated $55 million annually in property taxes in North Dakota, South Dakota, Iowa and Illinois.

Those against the pipeline argue that environmental concerns – water contamination and greenhouse gas emissions – outweigh any economic benefits.

The Standing Rock Sioux Tribe, which sued to stop construction on the pipeline, praised the administration’s last-minute intervention.

The tribe has 15,000 members nationwide and about 6,000 to 8,000 members living on tribal lands in North Dakota. They believe building the pipeline is irresponsible and would leave the land and water vulnerable to contamination from oil spills and would damage historic and culturally significant sites including ancient burial grounds, Dave Archambault II, Standing Rock tribal chairman, told FoxNews.com.

“Our indigenous people never had an opportunity to weigh in,” he said. “We have been expressing our concerns for the past two years but nobody heard us.”

The movement to stop the pipeline recently has been gaining ground.

Protesters on Tuesday swarmed construction workers northwest of the main protest site in North Dakota, while two others chained themselves to the equipment. Twenty people face criminal trespassing charges.

Multi-city coordinated protests popped up across the country this week, in Atlanta, Washington, D.C. and Los Angeles. In Atlanta, those opposed to the pipeline held signs and banners while chanting “oil kills.”

“We cannot allow our drinking water to be poisoned so that a handful of fossil fuel companies can make even more in profits,” Sanders said.

Green Party presidential candidate Jill Stein also recently got herself into hot water when she spray-painted construction equipment at one of the protest sites. She and her running mate, Ajamu Baraka, were charged with misdemeanor counts of criminal trespass and criminal mischief.