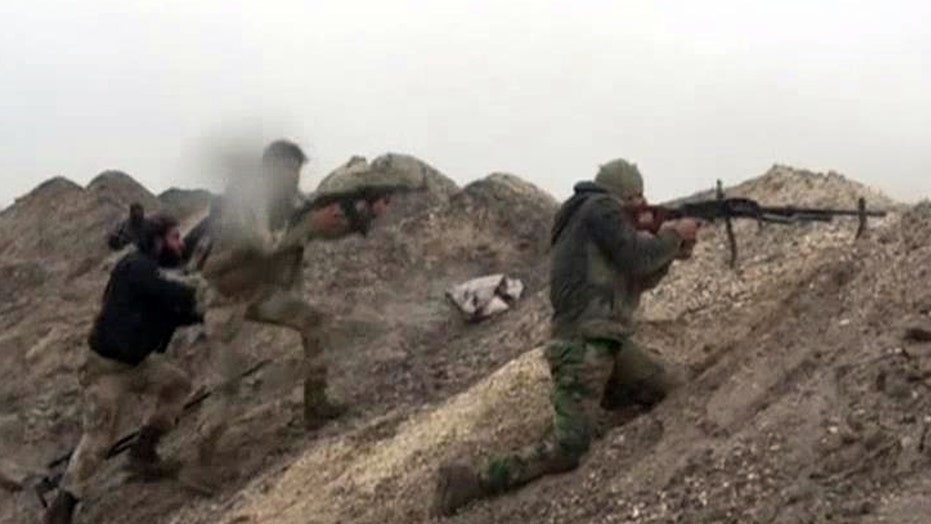 Why did the Pentagon's Syria rebel training program fail?

Gen. Jack Keane weighs in on what happened and what's next

The Obama administration is overhauling its struggling program to train and equip Syrian rebel fighters, effectively replacing it with a much smaller effort to supply "a select group of vetted leaders."

A senior U.S. official confirmed to Fox News that the military is ending the current training program.

In a written statement, Pentagon Press Secretary Peter Cook acknowledged "challenges" in the effort and said Defense Secretary Ash Carter is now directing DOD to "provide equipment packages and weapons to a select group of vetted leaders and their units so that over time they can make a concerted push into territory still controlled by ISIL."

The announcement represents a significant shift in the training effort.

Fox News reported last month that the administration was working to overhaul the training program, and would instead aim to train "enablers" who can embed with established groups fighting the Islamic State in Syria.

The New York Times first reported Friday that the existing training program would be shuttered. The Times report said a small group of "enablers," or leaders, indeed would be instructed at a small center in Turkey going forward, and taught to be able to call in airstrikes. But batches of rebels reportedly will no longer go through training in other camps.

The DOD statement did not go into great detail on the new program but said, "We will monitor the progress these groups make and provide them with air support as they take the fight to ISIL. This focus on equipping and enabling will allow us to reinforce the progress already made in countering ISIL in Syria."

Carter said in a statement that a "lasting defeat of ISIL in Syria will depend in part on the success of local, motivated, and capable ground forces."

The program to train moderate opposition forces has stumbled since its inception, with the U.S. falling far short of its training goals and many fighters getting killed or captured, or fleeing.

Gen. Lloyd Austin, head of U.S. Central Command, admitted last month that only "four or five" fighters from the program were actually on the battlefield, at that time.

And he acknowledged the U.S. would fall far short of its original goal of training 5,400 in the first year.

At that point, the Pentagon had spent $42 million (out of $500 million set aside for the training program) to vet, arm and pay dozens of rebels. Lawmakers have been visibly frustrated at the lack of progress.

"We're counting on our fingers and toes at this point," she said of the trained fighters.