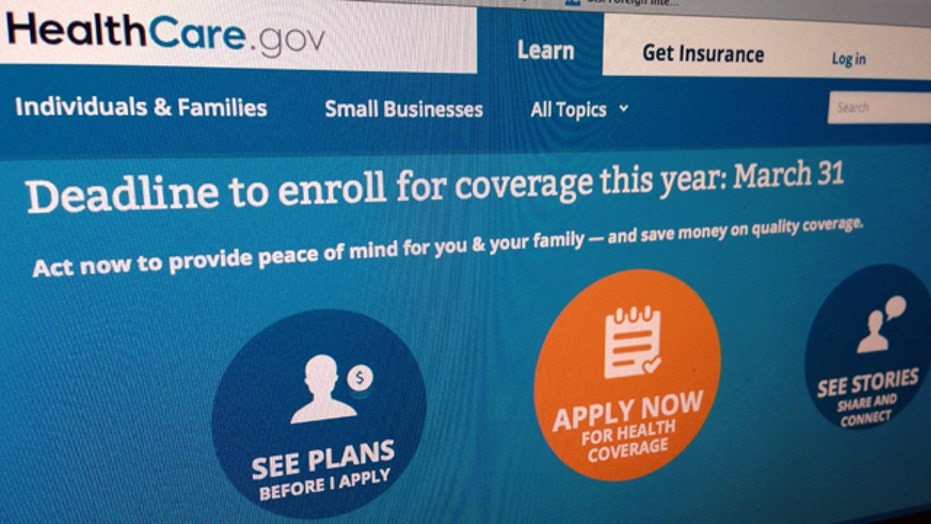 The Obama administration will grant extra time to Americans who say they are unable to enroll in health care plans through the federal insurance marketplace by the March 31 deadline, in a decision that swiftly drew Republican ridicule.

All consumers who have begun to apply for coverage on HealthCare.gov, but who do not finish by Monday, will now have until about mid-April to ask for an extension.

"We are experiencing a surge in demand and are making sure that we will be ready to help consumers who may be in line by the deadline to complete enrollment -- either online or over the phone," Health and Human Services Department spokeswoman Joanne Peters told Fox News.

"The administration is now resorting to an honor system to enforce it. What the hell is this, a joke?" Boehner said Wednesday.

The Washington Post first reported that users will have a chance to check a box on the website indicating they tried to enroll before the deadline, though the government will not try to determine whether the person actually made an effort to sign up.

Republican National Committee Chairman Reince Priebus pounced on the extension, calling it another delay for a "failed health care law."

“Another day, another ObamaCare delay from the same Obama administration that won’t work with Republicans to help Americans suffering from the unintended consequences of the Democrats’ failed health care law," Priebus said in a statement. "Democrats in leadership may say they are doubling down on ObamaCare but you have to wonder how many more unilateral delays their candidates running in 2014 can withstand.”

Many states and the federal government experienced technical problems with the enrollment websites, but implementation of the federal Affordable Care Act has been a relative disaster in Maryland, Massachusetts, Nevada, Oregon and Vermont.

Rather than focusing on meeting enrollment targets, officials in those states find themselves consumed with replacing top officials, cancelling contracts with software companies, dealing with state or federal investigations, and spending tens of millions of dollars on fixes and new contractors. The core of the problem has been the difficulty in building an online health insurance marketplace that syncs up with myriad state and federal databases.

Early projections for those five states were to sign up a combined 800,000 Americans for private health insurance coverage by March 31, 11 percent of the Obama administration's original target for national enrollment. Yet with just days to go before the six-month enrollment period ends, achieving 25 percent of that target would be considered a success.

Overseers of Nevada Health Link have called that state's program a "full failure" and a "catastrophe." Some officials have suggested dumping Xerox, which was awarded a $75 million contract to develop the system.

While Xerox remains on the job, a state board earlier this month approved up to $1.5 million to hire another tech firm, Deloitte Consulting, to assess the Xerox system and recommend fixes.

Last month Nevada officials cut their target enrollment from 118,000 to 50,000 and conceded that meeting even the lower goal would be a challenge. That drew the ire of board members, who lashed out about the thousands of people who will remain uninsured after Monday's deadline.

"These are not numbers. These are people throughout the state who don't have health insurance," said Lynn Etkins, an attorney and vice chairwoman of the board overseeing the Silver State Health Insurance Exchange.

It is a similar story in Oregon, where the exchange's executive director and two officials who oversaw the early technology development resigned. As of last week, 47,000 Oregonians had signed up for private insurance, less than a quarter of initial projections for the full enrollment period.

The exchange's website was so badly bungled that applications at the beginning had to be processed manually, a process that remains partially in use. Cover Oregon has withheld $26 million of the $160 million billed by Oracle, which designed the website.

The federal Government Accountability Office has announced an investigation, and a state-funded audit released last week found a failure by the exchange's managers to heed reports of problems, poor communication and what it described as "unrealistic optimism." In announcing results of the audit, Democratic Gov. John Kitzhaber said he was angry and disappointed in a process that had caused so much confusion and uncertainty among consumers.

Maryland's exchange crashed at the start of open enrollment on Oct. 1 and has been rocky ever since. The exchange's initial executive director, Rebecca Pearce, quit two months into open enrollment, and last month Maryland fired the state's prime information technology contractor, Noridian Healthcare Solutions, after paying it $65 million.

U.S. Rep. Andy Harris, the only Republican in Maryland's congressional delegation, called for a review by the U.S. Department of Health and Human Services into how $250 million in federal money was used in the botched exchange. The department's inspector general informed Harris that it will conduct the review.

"I mean, this is an immense amount of money on a project that I think in the end, if I were betting right now, I would bet that they will abandon the Maryland exchange and either import another state exchange like Connecticut's that works or go to the federal exchange," Harris said.

In addition to making major fixes, Maryland officials are considering whether to adopt technology developed by another state, join a consortium of other states running their own exchanges or partner with the federal exchange.

In Massachusetts, where health care reform implemented under then-Gov. Mitt Romney was used as a model for President Obama's Affordable Care Act, officials announced earlier this month that they were cutting ties with CGI Group Inc. The Montreal-based firm also was the lead contractor on the troubled federal health care website that operates in 36 states.

CGI was hired last year under a $68 million contract to develop a website transitioning Massachusetts' previous health insurance program to reflect requirements under the federal law.

But technical problems quickly led to a backlog of 50,000 paper applications, a pile that has since been whittled to about 21,000. The state hired Optum, another health care technology firm, to come up with short- and long-term solutions for the website, for which it was to be paid at least $16.4 million through the end of March.

"The picture we are painting is that we have a long way to go," said Sarah Iselin, a health care executive hired by Massachusetts Gov. Deval Patrick to oversee fixing the website. "We are not going to sugarcoat anything."

With its politics dominated by Democrats, Vermont was an early supporter of the Affordable Care Act. While the state has had some success with enrollments, its state-run exchange also continues to be plagued with problems.

The latest official numbers released by the Obama administration show that 24,300 people had signed up for individual plans through the exchange by March 1. That compares to the administration's original projection of 45,600 by that point in time.

As recently as Tuesday, the online marketplace still could not handle enrollees reporting a change of marital status, job or other circumstance. Participants must contact the exchange's customer service line to report those changes.

Gov. Peter Shumlin, a Democrat, has repeatedly said he has been disappointed with the rollout of the exchange website, which drew widespread criticism after it went live last fall for being slow and not allowing users to correct mistakes.

The portal could not process premium payments online until earlier this month.

Vermont Republican leaders have asked for an investigation by federal prosecutors and are hoping to capitalize on the exchange's problems by targeting Democrats, who control both houses of the state Legislature, in this year's elections.

The governor's spokesman, Scott Coriell, said the exchange has been making steady improvements and that enrollments have been picking up rapidly as the deadline approaches.

Some states, including Nevada, are giving consumers extra time to get through the process if technical problems prevented them from completing their enrollment by Monday. As of last week, only 22,000 successfully purchased private coverage in Nevada.

In all five states, officials are trying to limp through the end of this year's signup period while focusing on fixing problems so the exchanges run more smoothly when the next open enrollment period begins in November.

Nevada officials said they will push Xerox for improvements and await the assessment from Deloitte, but officials concede there will be a lot on the line.

"We can't go through this again," Republican Gov. Brian Sandoval said. "We're not going to wake up every morning seeing stories of Nevadans who can't navigate through the system; that aren't getting insurance cards; the gentleman who had a heart attack who is still sitting in limbo not knowing what his status is.

"This has cascaded to absolute worst-case scenario."