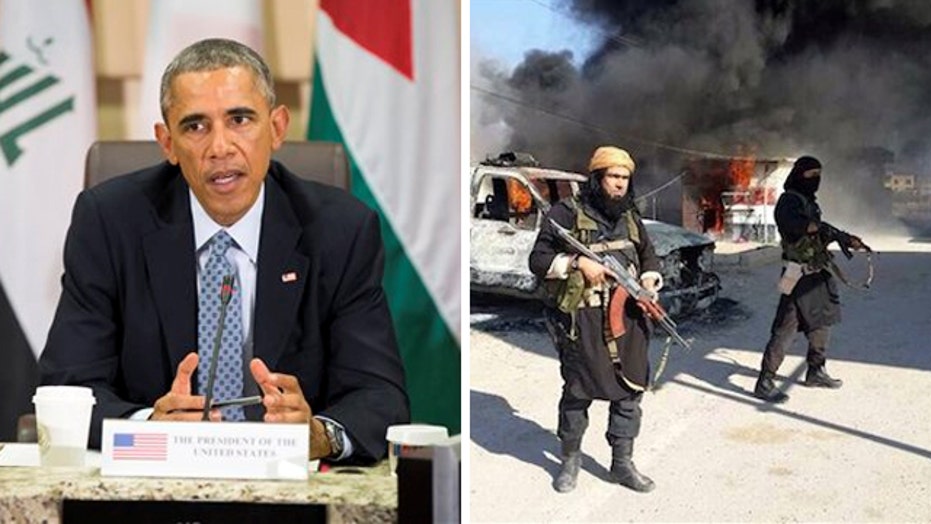 Obama: Fight against ISIS will be 'a long term campaign'

President addresses media after meeting with top US officials

President Obama acknowledged setbacks Tuesday in the war against the Islamic State, to the backdrop of fierce fighting for control of a Syrian border town and fresh concerns over Turkey’s cooperation.

The president spoke as he met just outside Washington with military chiefs from more than 20 nations.

He noted negative developments in the fight against the Islamic State, saying there will be days of progress but also “periods of setback.”

Stressing that there are no “quick fixes,” Obama said: “Our coalition is united behind this long-term effort.”

The alliance, though, faced a fresh test as Turkey launched airstrikes against Kurdish rebels inside its borders, defying pleas from the U.S. to instead focus on the Islamic State.

The attacks marked Turkey's first major airstrikes against Kurdish rebels on its own soil since peace talks began two years ago, and occurred amid heightened concern over Islamic State advances on the Syrian town of Kobani. Kurds in Turkey accuse the government there of standing idly by while Syrian Kurds are being killed in the besieged border town.

The U.S. has been pressing Turkey to take a more active role in the campaign to destroy the Islamic State group. Officials from Ankara were participating in Tuesday's meeting at Andrews Air Force Base, Md.

Earlier Tuesday, the U.S.-led coalition launched 21 airstrikes in and around Kobani. One of the strikes targeted the Tel Shair hill that overlooks parts of the city, according to Idriss Nassan, deputy head of Kobani's foreign relations committee.

Nassan said Kurdish fighters later captured the hill and brought down the black flag of the Islamic State group. The extremist group still controls more than a third of the predominantly Kurdish town.

While the White House has tried to point out progress in the campaign against the militants, the government is also preparing the American public for a military effort that could extend well beyond Obama's presidency. Officials acknowledged Tuesday that the airstrikes in Kobani may not be enough to prevent a militant takeover, given the lack of an effective fighting force on the ground.

"We certainly do not want the town to fall," White House spokesman Josh Earnest said. "At the same time, our capacity to prevent that town from falling is limited by the fact that air strikes can only do so much."

Syrian Kurds have been begging the international community for heavy weapons to help bolster their defense of Kobani. They've also called for Turkey to open the border to allow members of the Kurdish militia in northwestern Syria -- known as the People's Protection Units, or YPG -- to travel through Turkish territory to reinforce the city.

So far, both requests have gone unfulfilled.

Turkey is wary of the Syrian Kurds and their YPG militia, which it believes is affiliated with the Kurdish PKK movement in southeast Turkey that has waged a long and bloody insurgency against Ankara.

The PKK and Turkey agreed to a cease-fire last year, but the agreement has begun to unravel, and Turkish media reported Tuesday that the country's warplanes had struck suspected Kurdish rebel positions in southeastern Turkey a day earlier.

"It is impossible for us to tolerate or to placate these (attacks)," Davutoglu said.

Kurds, who make up an estimated 20 percent of Turkey's 75 million people, have faced decades of discrimination, including restrictions on the use of their language. The PKK has fought Turkey for autonomy for Kurds in a conflict that has claimed tens of thousands of lives since 1984.

The U.S. has been pressing Turkey to focus its efforts on the fight against the Islamic State group, an enemy the Turkish government shares with the Kurds. Turkey has said it won't join the fight unless the U.S.-led coalition also targets Syrian President Bashar Assad's government.

U.S. officials have pointed to some signs of cooperation from Turkey, including commitments to help stem the flow of foreign fighters across the border into Syria. The White House said Tuesday that discussions are also continuing over whether Turkey will allow the U.S. and other countries to use bases in the country to launch attacks against the Islamic State group.