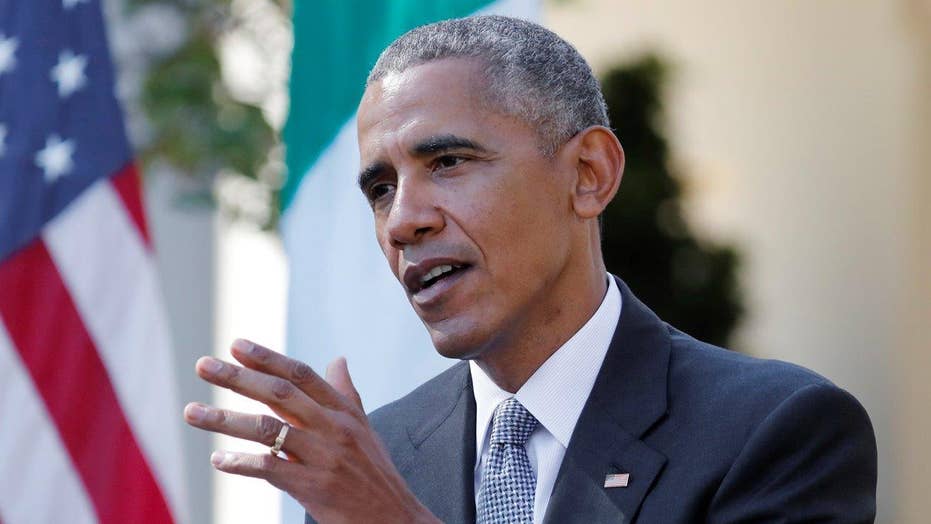 President Obama accused Donald Trump of “whining” Tuesday with his claims about the election being “rigged” against him, saying during a Rose Garden press conference that “it’s unprecedented” for a presidential candidate to try and discredit an election before the votes are cast.

The Republican nominee and running mate Mike Pence both have been stepping up warnings that the election could be rigged – though the statements pertain not just to potential voter fraud but media coverage they claim is biased.

“They have rigged it from the beginning by telling totally false stories,” Trump said in Colorado Springs, Colo., on Tuesday.

“There’s a lot of talk about rigged elections out there today,” Pence said at an Ohio rally Monday, claiming the media are “trying to rig this election with their biased coverage in Hillary Clinton’s favor.”

But speaking outside the White House alongside visiting Italian Prime Minister Matteo Renzi, Obama said the rigging claim “doesn’t really show the kind of leadership and toughness that you’d want out of a president -- if you start whining before the game’s even over.”

Obama argued that elections are so “de-centralized” that they couldn’t be rigged in the first place. Further, he said that if Trump wins, he’d expect rival Hillary Clinton to offer a “gracious” concession speech and work with him – and he personally would welcome Trump for a “peaceful transfer of power.”

“That’s what Americans do,” Obama said.

Obama, during the joint press conference, also took a swipe at Trump’s “flattery” of Russia’s Vladimir Putin. He called that and other comments from Trump “unprecedented in American politics.”

Meanwhile, Obama responded Tuesday to claims in newly released FBI documents that a senior State Department official offered a “quid pro quo” to the FBI in a bid to strip the classification on a particular Clinton email.

Obama said some of the "more sensational implications or appearances" related to the report "are not based on actual events." He said those types of interactions "happen a lot."

According to the FBI file, though, senior department official Patrick Kennedy offered additional slots for the bureau overseas if they would de-classify a particular email from Clinton’s server marked “SECRET.” This effort was unsuccessful.

Trump has said the FBI records show a "criminal act."

The Rose Garden press conference was held following an arrival ceremony earlier on the South Lawn for Renzi.

Obama will play host to Renzi at the final state dinner of his presidency.

Obama described the 41-year-old Italian leader as young and handsome and credited him with challenging the status quo in Italy with bold reforms.

"He's put forth a vision of progress that's not rooted in people's fears but rather in their hopes," Obama said.

Renzi, in turn, told Obama that many people think politics is about screaming, fighting and creating division, but that Obama was different: "We think history will be kind with you, Mr. President."