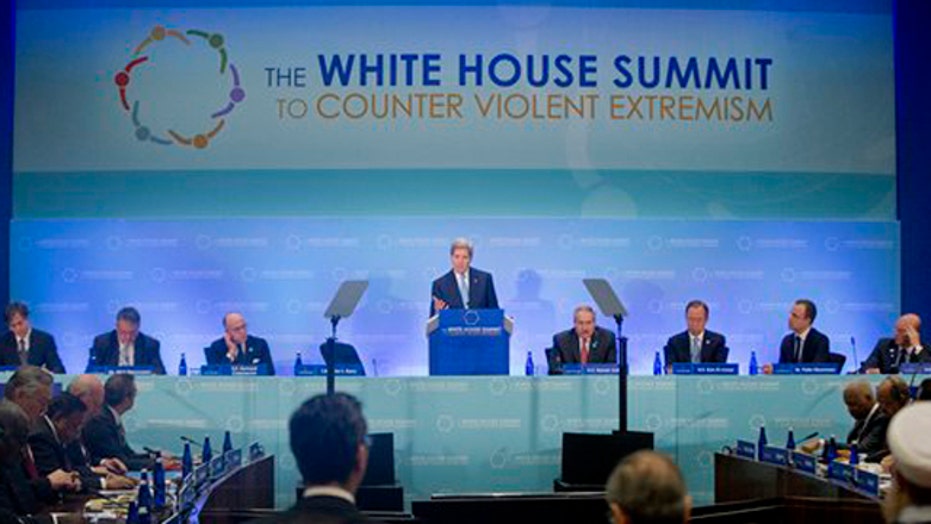 President Obama took pains Thursday to stress, once again, that the West is "not at war with Islam" as he wrapped a three-day White House forum on "violent extremism" -- but in the end, drew criticism that he was going to extremes to avoid talking about the threat of Islamic extremists.

"Sadly, this was a summit without substance," said Rep. Michael McCaul, R-Texas, chairman of the House Homeland Security Committee. "Americans understand we are not at war with Islam. But, we will not defeat these fanatics if we refuse to define them for what they are -- violent Islamist extremists."

The president and top officials in his administration, as they have before, generally avoided using the term "radical Islam" during the summit. Instead, Obama argued that groups like the Islamic State "use Islam to justify their violence" and that to accept that connection would be to embrace the "terrorists' narrative."

Obama on Thursday acknowledged the "unspeakable cruelty" inflicted by the Islamic State and said countries must be "unwavering" in fighting these groups. But he underscored the importance of improving political systems, boosting economies and making impoverished communities less susceptible to terror recruiters -- echoing a comment from a State Department official this week that jobs-creation programs could be an effective counterterrorism tool.

He offered no hint that the summit had produced a clear, unified and immediate global strategy to ultimately defeat the Islamic State -- instead issuing the declaration to the Islamic world that, "We are not at war with Islam."

McCaul accused Obama of spending more time hitting that point than he did laying out a "credible strategy."

"Instead ... we got empty rhetoric from the president and the announcement of 'new' initiatives that are really a rehash of old programs," he said in a statement. "Worse still, the president proposed more meetings and summits to tackle the problem. We don't need more summits. We need a real strategy from this president, and we need it now."

In describing both what to do and who the enemy is, Obama administration officials are using a broad brush. To combat terrorism, they're calling for more jobs and better "governance." Obama recently compared modern-day Middle East atrocities to Christian violence during the Crusades.

Secretary of State John Kerry, at the same summit, mocked what he described as the "silly" media debate over what to do about terrorism. "You have to do everything," Kerry said.

But Walid Phares, Fox News Middle East analyst, said Thursday that even America's European allies are putting forward a narrative that acknowledges a confrontation, not with Islam itself but with "jihadists."

"Only the Obama administration is not," he said.

Speaking on Fox News, Cruz accused Obama of being an "apologist for radical Islamic terrorists," given his recent Crusades comparison.

"I don't think it's too much to ask the president to stay in the current millennia," Cruz said Wednesday.

Administration officials, though, are laying out a carefully worded argument.

The U.S. is leading a multi-nation coalition in launching airstrikes against ISIS strongholds in Iraq and Syria. On Thursday, the administration also confirmed that Turkey and the U.S. have signed a deal to train and arm Syrian rebels -- who are battling both the Assad regime and the Islamic State -- using a training site hosted by Turkey. But Kerry, at the summit and in a Wall Street Journal op-ed, argued that the international community needs to do more than pursue military options for confronting extremism.

"No one country, no one army, no one group is going to be able to respond to this adequately," he said Thursday.

In the Wall Street Journal column, Kerry said "good governance" is vital because those with stable and effective governments are "less likely to strap on an AK-47 or a suicide vest, or to aid those who do."

Further, he said another option "may be training young people so they can get jobs and envision a future of dignity and self-reliance."

That follows department spokeswoman Marie Harf likewise stressing the importance of job creation for combating the "root" causes of terrorism.

But terrorism analyst Zuhdi Jasser took issue with the approach.

"[Obama] is insulting, I think, to many millions of reform-minded Muslims who are trying to reject and push back theocracy," he told Fox News on Wednesday. "And the leader of the free world in the meantime is saying, 'Well, these terror groups are sort of coming out of thin air and it's just sort of a crime, education and a job problem' -- which is absurd and oversimplifying."

As the Obama administration discusses long-term strategies, Jasser said that strategy should seek to "advance liberty, engage civil society and engage reformists and take sides within the house of Islam against the theocrats which are dominating every conversation for Muslims."