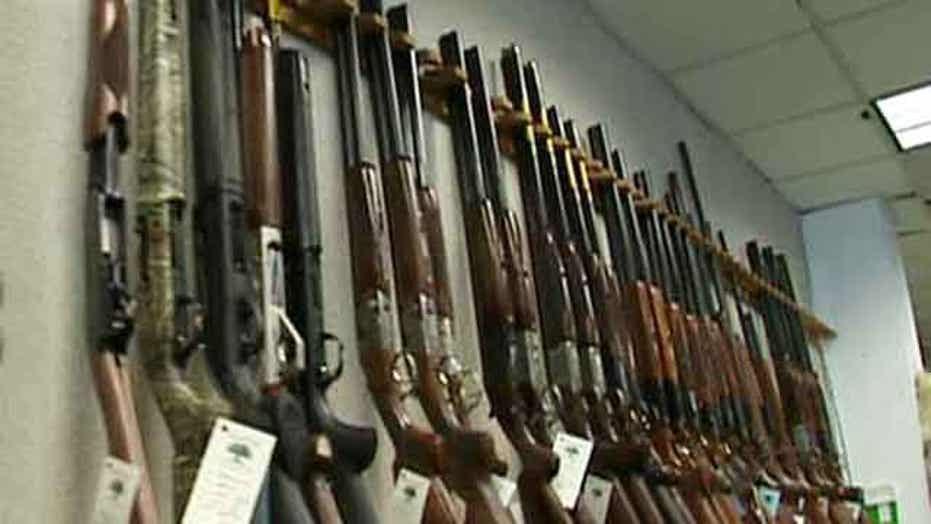 Guns flying off store shelves as control debate heats up

Fair and balanced feedback on 'Geraldo at Large'

New York on Tuesday became the first state to approve a comprehensive set of gun control laws in response to last month’s mass shooting at a Connecticut elementary school, amid concerns among gun owners that the spate of changes to local and state gun laws could make them targets of overzealous politicians and prosecutors.

New York’s new laws will expand the state's ban on assault weapons and include new measures to keep guns away from mentally disturbed individuals. Under the new law, ammunition magazines would also be restricted to seven bullets, from the current 10 -- owners caught with eight or more bullets in a magazine could face a misdemeanor charge. The law also prohibits Internet sales of assault weapons and in another provision, a therapist who thinks a mental health patient is making a credible threat to use a gun illegally would be required to report the incident to the state.

"We can no longer afford to sit idly by and allow gun violence to destroy the fabric of our communities," Democratic New York Assemblyman Karim Camara said. "It is imperative that we take immediate action now to prevent further senseless acts of violence."

But not everyone is on board with the Empire State’s plan, amid concerns that otherwise law-abiding gun owners could be hit with jail time for an inadvertent offense. Gun owners must already navigate a maze of regulations, and be cognizant of how they vary whenever they cross state lines.

"These gun control schemes have failed in the past and will have no impact on public safety and crime," the National Rifle Association said in a statement. "While lawmakers could have taken a step toward strengthening mental health reporting and focusing on criminals, they opted for trampling the rights of law-abiding gun owners in New York."

Roger Pilon, the director of the Cato Institute’s Center for Constitutional Studies, added that, “Right now, there is an intense focus by the left on gun control legislation and therefore one imagines that overzealous prosecution might be in the cards.

“In the hands of an over-eager prosecutor, a citizen’s liberty can be very much at peril regardless of what statute might be in play," he said.

On Wednesday, President Obama is expected to unveil a series of “concrete proposals” to counter gun violence that will include a federal push for an assault weapons ban and measures to strengthen background checks for gun buyers. The president is weighing as many as 19 steps he could take through executive action alone, congressional officials said.

As Congress and the White House hammer out the details on a national plan, tourist-heavy cities like New York, Chicago and Los Angeles have moved forward in recent weeks with their own proposals.

But that worries some who say law-abiding gun owners have turned into political pawns. Even before the Newtown shootings, New York authorities had a mixed history of taking a hard-line stance against gun owners who have permits to carry weapons in other states. While some states accept carry permits from other places, New York does not.

Last year, former Marine Ryan Jerome, a jeweler from Indiana, agreed to serve 10 days of community service and pay a $1,000 fine on a gun violation in New York. Jerome was arrested in 2010 at the Empire State Building on a gun-possession charge that prompted outrage among gun rights advocates. Public pressure prompted prosecutors to agree to downgrade Jerome’s felony charge to a misdemeanor weapons-possession charge. Had they not made the change, Jerome would have faced up to three-and-a-half years behind bars. He was arrested in late 2010 after trying to check his pistol with security guards at the New York landmark.

“I definitely did not know it was illegal to bring a gun into New York City,” he had said at the time.

Tennessee tourist Meredith Graves said she was trying to obey a “No Guns” sign at Ground Zero when she tried to check her .32-caliber pistol at the National September 11 Memorial, but was arrested instead. She pleaded guilty to a misdemeanor weapons-possession charge.

“Gun owners should check local laws but everything keeps changing so fast,” Pilon told FoxNews.com Tuesday. “It is very hard to keep up with these statutes that are different in every state and very difficult to find.”

Pilon said changes and updates to local laws aren't automatically updated online and that it is up to the gun owners to educate themselves.

Former Tea Party leader Mark Meckler was arrested at LaGuardia Airport in December 2011 after he gave a Delta Air Lines agent a locked gun box in California before boarding a flight to New York. Meckler had a permit to carry a gun in California but not one in New York. He pleaded guilty to disorderly conduct.

And in 2011, Maryland resident Stephen Grant was arrested and charged with criminal possession of a weapon in the second degree after he left his gun in his New York hotel room. He pleaded guilty to a reduced gun charge.

Another city looking to make swift changes to its gun laws is Chicago. Mayor Rahm Emanuel said he plans to introduce a proposal Thursday that would double jail sentences – to six months - for Chicagoans who fail to report that their guns have been lost, stolen or transferred to another owner. The mayor also wants to increase jail time for people caught with an assault weapon, metal-piercing bullets or certain kinds of high-capacity ammunition magazines.

Richard Pearson, executive director of the Illinois State Rifle Association, said the mayor’s plan will hurt law-abiding citizens and will do very little to stop someone who wants to hurt others.

“They aren’t doing anything about crime,” he said. “They are just using crime as an excuse.”