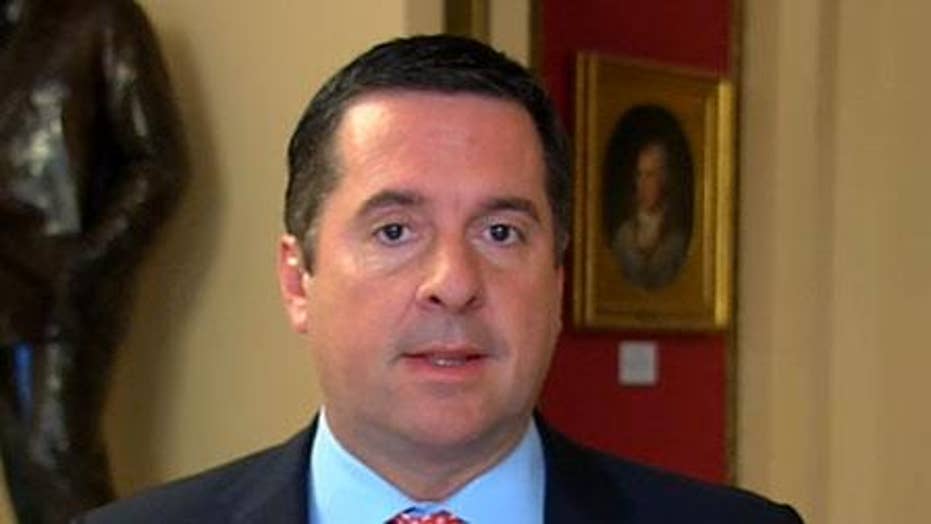 Devin Nunes: Is FISA court trying to abolish itself?

NATIONAL HARBOR, Md.-- Rep. Devin Nunes, R-Calif., warned Friday that Republicans have subpoenas “ready to go” if they take back the majority of the House of Representatives in November, saying they plan to continue investigating and interviewing top FBI and Justice Department (DOJ) officials involved in the Russia investigation.

In an interview with Fox News on the sidelines of the Conservative Political Action Conference (CPAC) Friday, Nunes, the top Republican on the House Intelligence Committee, said it was difficult for people to “trust the FBI and DOJ” after the bureau’s initial Russia probe and former Special Counsel Robert Mueller’s nearly two-year-long investigation.

That probe led to no evidence of a conspiracy or coordination between members of the Trump campaign and the Russians to influence the 2016 presidential election.

“You can be sure of this, if we take the House in November, we have subpoenas ready to go that will continue going after these dirty cops,” Nunes told Fox News.

“They’re doing everything they can to not make reforms and that’s not going to be sufficient,” he said.

Nunes and Republicans on the Intelligence Committee have been blasting Schiff and Democrats and accusing them of ignoring FISA abuse, following the release of a scathing Justice Department inspector general report that revealed significant misconduct.

Justice Department Inspector General (IG) Michael Horowitz, in his Dec. 9, 2019 report, identified “17 serious shortcomings related to the conduct” of the surveillance of former Trump campaign foreign policy aide Carter Page, and that the FBI made repeated errors and misrepresentations before the FISA court, as they sought to monitor Page in 2016 and 2017.

Page was a central figure in Mueller’s investigation. Mueller did not find any wrongdoing by Page and was unable to substantiate the anti-Trump dossier’s claims about him.

But for the time being, Nunes told Fox News that he and Republicans on the committee will continue to make recommendations to Democrats for reform to FISA.