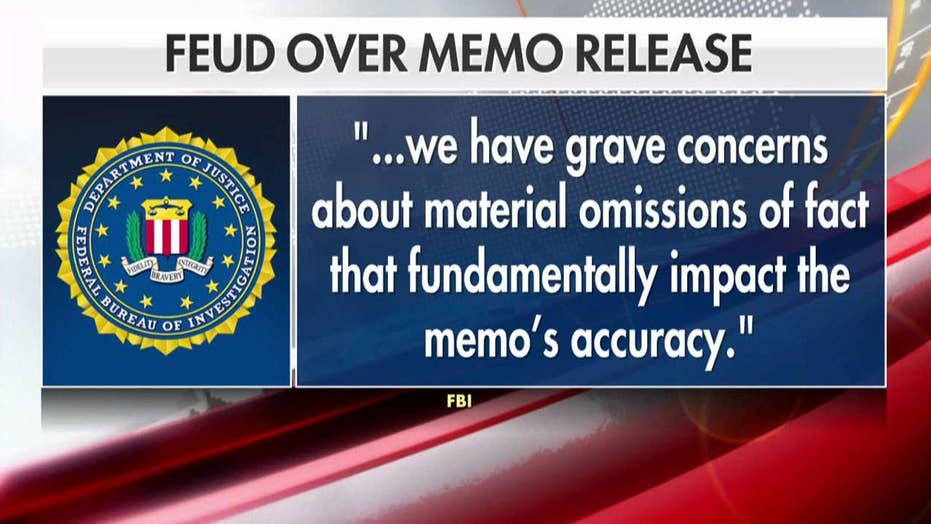 Surveillance memo could be released over FBI objection

The top Democrat on the House Intelligence Committee late Wednesday charged that the committee's chairman made "material changes" to a controversial memo sent to the White House that is purportedly critical of the FBI's use of surveillance during the 2016 presidential campaign.

Rep. Adam Schiff, D-Calif., made the charge over Twitter and sent the committee a formal letter. Schiff said Rep. Devin Nunes, R-Calif., the comittee's chairman, made edits to the memo.

Schiff, who earlier called on Nunes to withdraw the memo, wrote that the committee’s minority determined that the letter was not “the same document” that its members have been reviewing since mid-January.

“The White House has therefore been reviewing a document since  Monday night that the committee never approved for public release,” Schiff wrote. He continued, “While the majority’s changes do not correct the profound distortions and inaccuracies in your document, they are nonetheless substantive.”

A spokesman for the committee responded to Schiff, saying, “In its increasingly strange attempt to thwart publication of the memo, the committee minority is now complaining about minor edits to the memo, including grammatical fixes and two edits requested by the FBI and by the minority themselves.”

The FBI said Wednesday it had "grave concerns" about the accuracy of a classified memo on the Russia election investigation that President Trump wants released.

The FBI's short and sharp statement, its first on the issue, laid bare a Trump administration conflict that had previously played out mostly behind closed doors in meetings between top Justice Department and White House officials.

"As expressed during our initial review, we have grave concerns about material omissions of fact that fundamentally impact the memo's accuracy," the FBI said.

Schiff did not detail the changes, and a spokesman for Nunes did not immediately respond to a request for comment. Trump has five days from the vote to review the document, and if he doesn't object then Congress can release it.

Five career officials from the FBI met with John Kelly, the White House chief  of staff, late Tuesday afternoon to view an amended version of the memo, according to a senior administration official.

“Having stonewalled Congress’ demands for information for nearly a year, it’s no surprise to see the FBI and DOJ issue spurious objections to allowing the American people to see information related to surveillance abuses at these agencies,” Nunes said Wednesday.