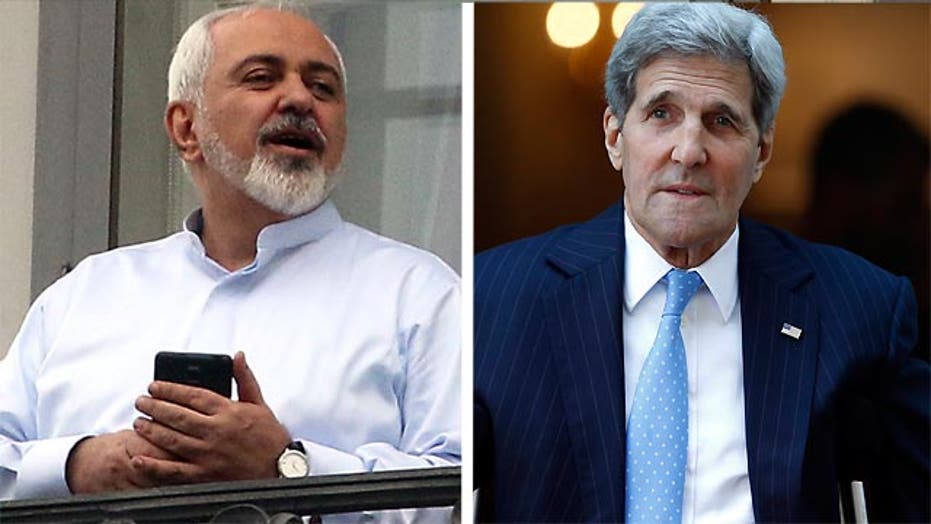 The fourth deadline for a nuclear deal with Iran passed quietly late Monday but the Associated Press reported that three diplomats familiar with the talks said an announcement could come early Tuesday morning.

Despite earlier initial expectations that a final pact was imminent, Iran's top diplomat reportedly said late Monday the negotiators would not be able to meet a midnight deadline (6pmET) -- the fourth in a string of ever-extending deadlines.

On top of that, Iranian President Hassan Rouhani appeared to jump the gun, sending and then swiftly deleting a tweet proclaiming: "Iran Deal is the victory of diplomacy & mutual respect over the outdated paradigm of exclusion & coercion. And this is a good beginning."

But late Monday, the AP said one of the diplomats - who weren't authorized to speak publicly on the status of the negotiations and demanded anonymity -- said some of the top officials involved in the negotiation needed to leave Austria's capital in the morning, thus hastening the declaration.

The diplomats' reports of a pending announcement capped a seesaw day of developments that started with high hopes for an accord.

But Tehran and Washington were clear by midday that no deal was yet ready for prime-time.

The White House said "some sticking points" remain "unresolved," and suggested the U.S. team could "remain in Vienna" to try to work them out. While claiming "important progress" has been made, Press Secretary Josh Earnest acknowledged an interim agreement could be "extended again" to give room for talks.

The statements once again raise questions about the course of the talks and potential for any agreement, with negotiators poised to blow past their fourth deadline.

This time, expectations had been raised of an agreement emerging by the deadline. Earlier, diplomats had told the Associated Press that an agreement aimed at curbing Iran's nuclear program in exchange for sanctions relief would likely be announced Monday.

But Iranian Foreign Minister Mohammad Javad Zarif told reporters late Monday that talks would not end by the deadline, according to Haaretz and Reuters, citing Iranian media.

Iranian news outlet ISNA previously had quoted Zarif saying talks between Iran and six world powers would not be extended after the Monday deadline.

But the White House indicated a willingness to keep them going.

With few signs that Iranian or U.S. negotiators were prepared to give ground, the high-stakes game of brinksmanship looked set to force a fourth extension of talks since the current round began 17 days ago.

Grim-faced foreign ministers from the six countries negotiating with Iran declined to answer questions about another possible prolongation of discussions as they gathered for a group meeting at the 19th-century Viennese palace hosting the talks.

One diplomat described the latest delay as unexpected, saying negotiators had thought the remaining disputes could be resolved by late Sunday.

A deal would place long-term limits on Iran's nuclear program. The United States also wants to ensure the U.N.'s International Atomic Energy Agency has wide-ranging authority to investigate nuclear arms allegations after being stalemated for a decade.

If reached, it would culminate nearly a decade of wearying negotiations. The pact would impose verifiable limits on nuclear programs so that Tehran cannot modify them to produce weapons. Iran, in return, would get tens of billions of dollars in sanctions relief.

But in the U.S., the Obama administration is under pressure from skeptical members of Congress and close American allies who feel the accord isn't stringent enough.

On Monday, Israeli Defense Minister Moshe Yaalon said a nuclear deal would force the Jewish state to "defend itself, by itself."