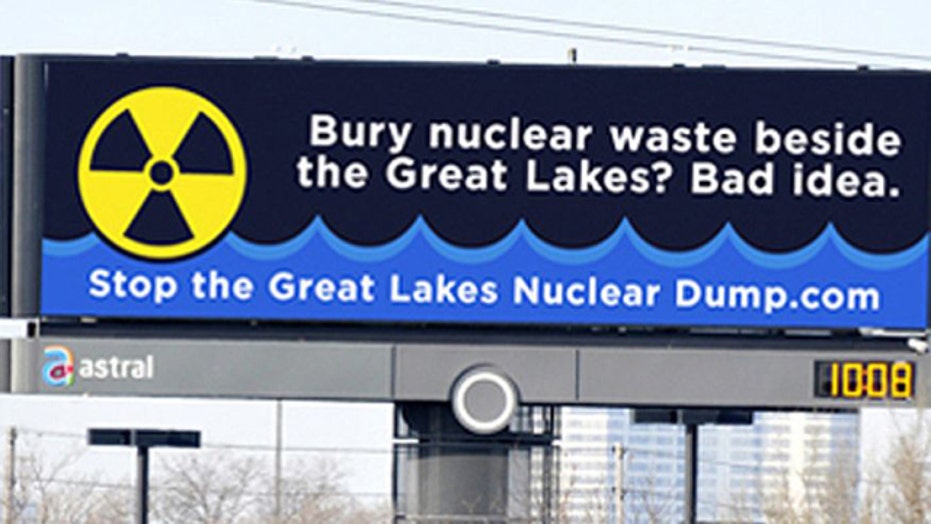 A Canadian power company's plan to bury nuclear waste 150 miles from Detroit and less than a mile from Lake Huron has Americans fearful the Great Lakes - and some 40 million people who get their drinking water from them - could be put at risk.

A Canadian advisory panel submitted a report Wednesday that concluded the project would cause no significant environmental harm -- despite strong opposition by Rep. Dan Kildee, D-Mich., and several other lawmakers, who argue the waste plan is a major safety threat to the Great Lakes. The plan, if approved by Canada's Minister of the Environment, would allow millions of gallons of low-level nuclear waste to be stored 2,200 feet below the earth's surface.

The site in question is Kincardine, Ontario, which sits at the shores of Lake Huron and is about 150 miles from Detroit. Despite its proximity to the border, U.S. approval of the project is not required.

Kildee, of Flint, is sponsoring a nonbinding congressional resolution opposing the project.

If the plan proceeds, Ontario Power Generation -- a local corporation that owns other nuclear power plants in Ontario -- will build a permanent underground nuclear waste depository. The facility could store up to 52 million gallons of low-to-intermediate level nuclear waste underground, according to Kildee, and the waste would remain active for thousands of years.

A Canadian joint review panel submitted its final report Wednesday to Leona Aglukkaq, Canada's Minister of the Environment, recommending the plan moves forward. Aglukkaq has 120 days from receipt of the panel's report to accept or reject it.

After its release, Kildee said he was disappointed by a report he called "fundamentally flawed in several ways."

"It’s hard for me to accept the joint review panel’s conclusion that a site less than a mile from Lake Huron is the safest and most appropriate place to store millions of gallons of nuclear waste when they failed to even consider other potential sites," Kildee said in a statement. "Surely in the vast landmass that comprises Canada, there has to be a more sensible place to bury nuclear waste than right next to the world’s largest freshwater source, the Great Lakes."

"Nuclear waste is hazardous material that will remain radioactive for generations, and no person, panel or country can ever say with absolute certainty that there is no environmental risks," he said. "...if an accident were to happen on the shores of the Great Lakes, a nuclear radiation release could endanger the freshwater supply for over 40 million people, both in the U.S. and Canada."

Kildee also seized on Canada's past objection to a similar plan proposed by the U.S. decades ago.

"When the U.S. was considering a nuclear storage facility in the 1980s near the Great Lakes, Canada’s then-Minister for External Affairs objected, saying such a site too close to a shared water basin was not appropriate," he said. "If nuclear waste stored within our shared waterways was too close for Canada, why is less than a mile from the Great Lakes appropriate now?"

In a statement on its website, Ontario Power Generation said vowed a commitment to responsible, long-term storage of nuclear waste.

"The idea for this project came from the community. OPG developed the DGR (Deep Geologic Repository) with one goal in mind: to create permanent, safe storage for Ontario’s low and intermediate-level nuclear
waste," said Laurie Swami, senior vice president of OPG.

"The deep geologic repository will be designed to protect the Great Lakes' unique natural environment and precious resources," Swami said. "OPG and a team of scientists will closely analyze the panel’s conditions, many of which reinforce our commitment to the stewardship of the Great Lakes."

"There’s a risk this is going to get into the water," Jim Riccio, a nuclear power analyst with Greenpeace USA, told FoxNews.com. "You don’t have to be burying this waste underneath Lake Huron."

"There are better places to put the waste than underneath the water that Canadians and Americans rely upon," Riccio added, claiming the panel's recommendation of such a nuclear dumping site underscores a "lack of foresight this industry has displayed throughout its history."