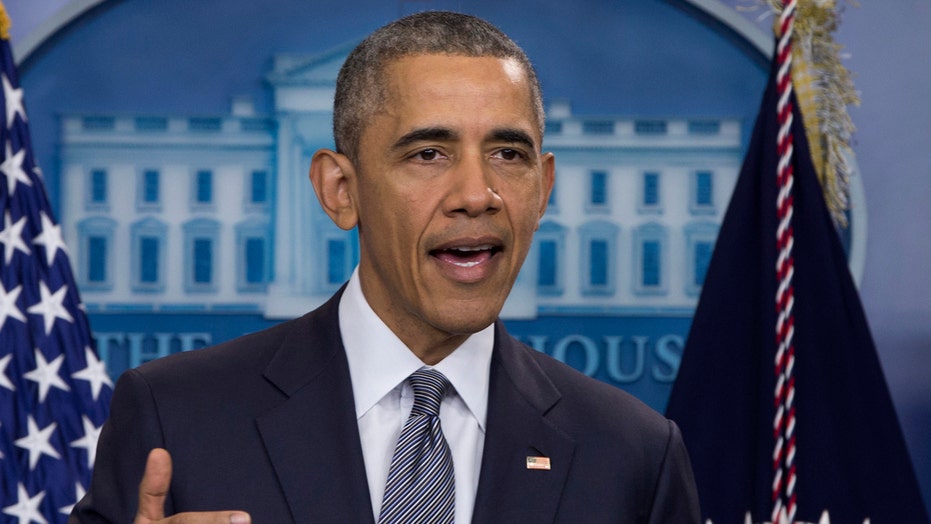 Obama: Presidential race is 'not a reality show'

President weighs in on media's role in race for the White House, Donald Trump and Bernie Sanders' candidacies

President Obama, reacting to Donald Trump effectively wrapping up the Republican primary race earlier this week, took his opening shots Friday at the now-presumptive nominee – urging tough scrutiny of the businessman’s record and saying, “This is not a reality show.”

The president was asked about the Republican race during an impromptu press conference following remarks on the economy at Friday’s White House briefing.

“[Trump] has a long record that needs to be examined,” Obama said, urging the public to “take seriously” some of the controversial statements he’s made.

“This is a really serious job. This is not entertainment. This is not a reality show. This is a contest for the presidency of the United States,” he said.

This is hardly the first time Obama has criticized Trump. But with the billionaire businessman all but assured the nomination after his remaining rivals dropped out, Friday’s remarks mark the start of a more focused effort by the president to keep the Oval Office out of the GOP standard-bearer’s hands next January.

“Every candidate, every nominee needs to be subject to exacting standards and genuine scrutiny,” he said.

Trump has faced mounting attacks from Democrats – mostly his likely general election opponent Hillary Clinton – since knocking his primary opponents out of the race earlier this week. He’s also faced some pushback from within the GOP, including from House Speaker Paul Ryan.

But Trump, speaking with Fox News earlier Friday, said his campaign has helped bring “millions” into the party and predicted a "tremendous victory" in the fall.

“Now the Republican Party is the talk of the world because there's no place and no party that's … increasing in scope like we have,” he said. “Millions of people have come into the party … and that wouldn't have happened if I didn't run, believe me.”

Obama on Friday declined to comment in depth on the still-active Democratic contest, and whether underdog candidate Bernie Sanders should step aside.

“Let’s let the process play itself out,” Obama said. “Everybody knows what that [delegate] math is.”

Obama was referring to former Secretary of State Clinton’s significant delegate lead. Still, she doesn’t yet have enough delegates to clinch the nomination. Sanders is vowing to take his campaign all the way to the convention, and his surprise victory in the Indiana primary on Tuesday helped keep his bid afloat.

U.S. employers pulled back on hiring in April, adding 160,000 jobs, the fewest in seven months, after a streak of robust monthly gains. The unemployment rate remained at a low 5 percent, roughly where it has been since fall.

Last month's hiring gain marked a drop from the average increase of 200,000 over the past three months. Weak U.S. economic growth may be making some employers more cautious about hiring.

Still, the government's report Friday pointed to a U.S. job market that continues to generate steady hiring and to outperform those of most other major countries.

Obama on Friday touted a long-term trend of private sector job growth, noting wages are rising and unemployment is falling. He suggested global economic factors are holding the U.S. back.

“We’ve got to do everything we can to strengthen the good trends and guard against some dangerous trends in the global economy,” he said, calling once again for congressional support in approving new infrastructure spending and raising the national minimum wage.

Republican National Committee Chairman Reince Priebus pointed to the April jobs report as proof of a “hollow recovery that has left too many Americans behind,” blaming “eight years of liberal Democrat policies.”

He said: “We need a Republican president in the White House who will grow opportunity for every American and get our economy back to full strength.”

The administration also touted new financial regulations Friday that would force companies to disclose more information about their owners, part of an effort billed as a crackdown on tax evaders and money launderers.