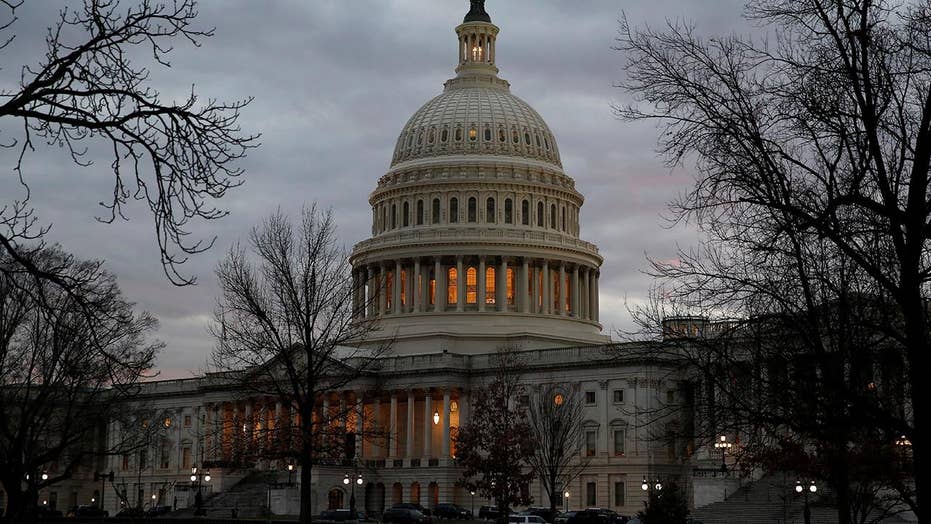 What's in and out of Congress' short-term spending bill

Peter Doocy reports from Capitol Hill on the details of the continuing resolution to fund the government into 2018.

January is the new December in Congress.

Lawmakers dashed out of Washington Thursday night after approving a short-term bill to run the government through Jan. 19. December was supposed to be an epic month on Capitol Hill. Lawmakers expected brawls over a host of seemingly intractable issues like military funding, disaster aid and DACA. Then there was the GOP aim to finish tax reform.

The tax bill was the easy part. Republicans wrapped that with relative ease on Wednesday – and proceeded to shelve virtually every major issue until January.

Did the holiday spirit simply prevail on lawmakers? Or, basking in the afterglow of tax reform, did Republicans simply come to their senses and realize it wasn’t a good idea to mess with a government shutdown at Christmas?

But in the end, Democrats wanted to ditch Washington too. Democrats noted that the GOP controls both the House and Senate. If Republicans managed to discombobulate their tax reform victory by stumbling into a government shutdown around the holidays, fine. But if Republicans got their act together, Democrats knew the issues wouldn’t dissolve over the break. Democrats would hold even more leverage in January. Plus, Democrats thought they could force the president’s hand on a number of subjects just days before the State of the Union speech on Jan. 30.

Congressional Republicans reveled at the White House Wednesday afternoon after the House approved the final version of the tax bill. But two hours later, House GOPers sweated in an intense, testy meeting in the Capitol basement about options to avoid a government shutdown.

Some GOPers worried that House Speaker Paul Ryan, R-Wis., misread how much good will he’d garner from passing tax reform. They feared Ryan would make his members eat a barely adequate bill to avert a government shutdown at the holidays.

“We just passed tax reform,” said one senior House GOPer leaving the meeting. “At least give us two to three hours before you murder Santa Claus on the way to Christmas.”

Some Republicans complained that the leadership focused on little else but the tax bill of late.

“I’d walk into a fire for Paul. But [funding the government] was never as easy as they thought it going to be,” said Rep. Chris Stewart, R-Utah. “We need to do a better job of multi-tasking.”

Many conservatives with libertarian leanings were upset about attaching a temporary reauthorization of Section 702 of the Foreign Intelligence Surveillance Act (FISA) to the spending bill. Defenders of FISA consider the program a key tool in disrupting terrorism plots. But some lawmakers fear the operation could lead to spying on Americans without a warrant.

It was almost too much for House Republicans to swallow as they stared into the abyss of a holiday government shutdown.

“This was one of the most depressing conferences I’ve ever set through,” moaned one senior House Republican.

That alone is an utterly stunning comment considering the fact that Republicans just approved the tax bill.

House Majority Whip Steve Scalise, R-La., took the pulse of members during a series of votes on the floor Wednesday night, weighing government funding scenarios. When asked how the vote tally went, Scalise said they were still “tabulating” the numbers, adding there was “a lot of enthusiasm.” But no one was quite sure how Republicans could be enthused about the government funding plan.

Members of the Freedom Caucus abhorred the idea of re-upping FISA just to keep the government’s lights on.

“We want to change FISA,” said Rep. Scott Perry, R-Pa., a Freedom Caucus member. “We don’t want it on the CR (Continuing Resolution, which is shorthand for the spending bill).”

Ryan remained trained on tax reform Thursday morning. The speaker and Senate President Pro Tempore (the most-senior member of the body of the majority party) Orrin Hatch, R-Utah, signed the tax bill in a splashy ceremony at the Capitol before shipping the package to President Trump for his signature.

Yours truly tried to ask Ryan at the end of the celebration if there were problems with the CR. But the Wisconsin Republican was having none of it.

“Oh Chad, let’s just enjoy the moment,” said Ryan before walking out of the Rayburn Room off the House floor.

In the end, the House and Senate voted to avoid a shutdown.

“I’m not quite sure how we did it after that conference Wednesday night,” conceded one senior Republican source. “I didn’t think we [had the votes]. That was a rough one.”

But a lot remains undone.

The House and Senate couldn’t even get in sync on an $81 billion disaster relief package for areas stricken by hurricanes and wildfires. The House approved the effort. But the Senate wants to alter the measure in January. Lawmakers must figure out a long-term solution for FISA. Full funding for the military isn’t resolved – to say nothing of the rest of government. A permanent fix for DACA remains elusive.

“I guess we’d better recharge our batteries. It’s like Groundhog Day. Over and over and over again,” said Cornyn. “It’s maddening.”

That narrows to 51-49 with the arrival of Jones in January.