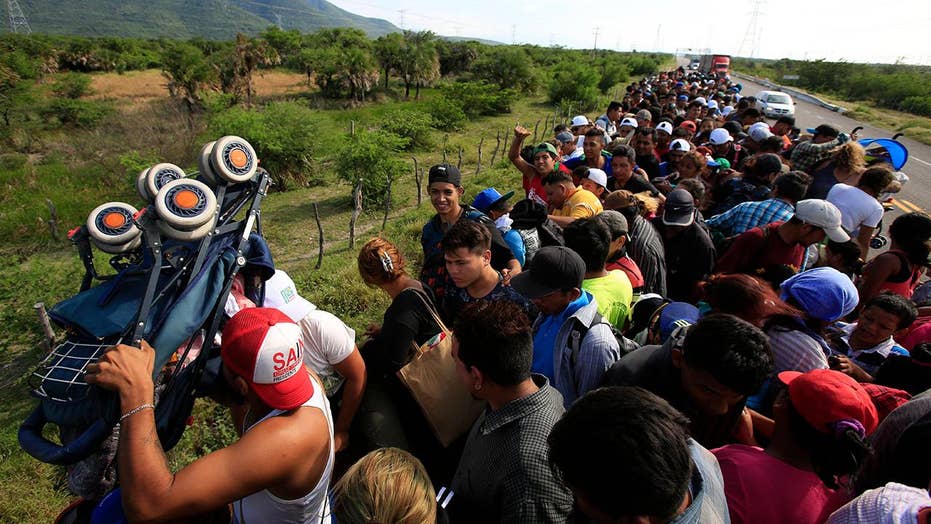 The Department of Homeland Security is sounding the alarm over what it calls an “unprecedented crisis” at the border, stemming from "catch-and-release loopholes" that allow some illegal immigrants to remain in the country  -- as a migrant caravan of almost 4,000 people makes it way toward the U.S.

The department, under Secretary Kirstjen Nielsen, released a statement on Wednesday saying that the number of “smugglers and illegal migrants” traveling with a minor or as a minor to the U.S. has increased exponentially in the past year, claiming some of the migrants know how to take advantage of the systems in place.

“Knowledge of these loopholes has led to a dramatic transformation in the population of those seeking to enter our country illegally. Whereas previously, [U.S. Customs and Border Protection ] was primarily apprehending single adults, now CBP is experiencing an influx of minors and adults traveling with minors seeking to enter illegally,” the statement read.

The department said fiscal year 2018 saw a jump in family unit apprehensions by more than 40 percent over any other year on record. That number increased by 22 percent alone from August to September along the southwestern border.

Immigration groups have criticized the Trump administration’s attempt to strengthen, what they say, are already strict immigration laws. The American Civil Liberties Union recently slammed calls by Trump to end birthright citizenship, calling it a blatant and “unconstitutional attempt to sow division.”

TVPRA requires all unaccompanied illegal migrants under the age of 18 to be transferred to the Department of Health and Human Services where they eventually would be resettled with a sponsor or relative. Officials said those sponsors or family members often are in the U.S. illegally themselves.

DHS also took aim at the Flores Settlement Agreement, which requires that families be released after 20 days regardless of the status of their immigration cases.

“Migrants know that their short stay in a U.S. detention facility is essentially just a waiting stop before they receive a bus ticket to their chosen U.S. city,” the statement read.

DHS also said the asylum process has been subject to abuse, as migrants without any genuine need to claim asylum could still get in by claiming "credible fear."

The department said the feds needed to address all three of their immigration concerns -- by changing TVPRA to allow certain illegal-alien minors to be sent back home, by giving DHS the power to detain and remove entire families, and by strengthening the existing asylum standards.

The first leg of the caravan heading towards the U.S. was about 900 miles away from the nearest border crossing on Wednesday.

The Pentagon announced it will deploy 5,200 troops to the Southwest border but President Trump took to Twitter Wednesday to say that the "many more" are on the way.