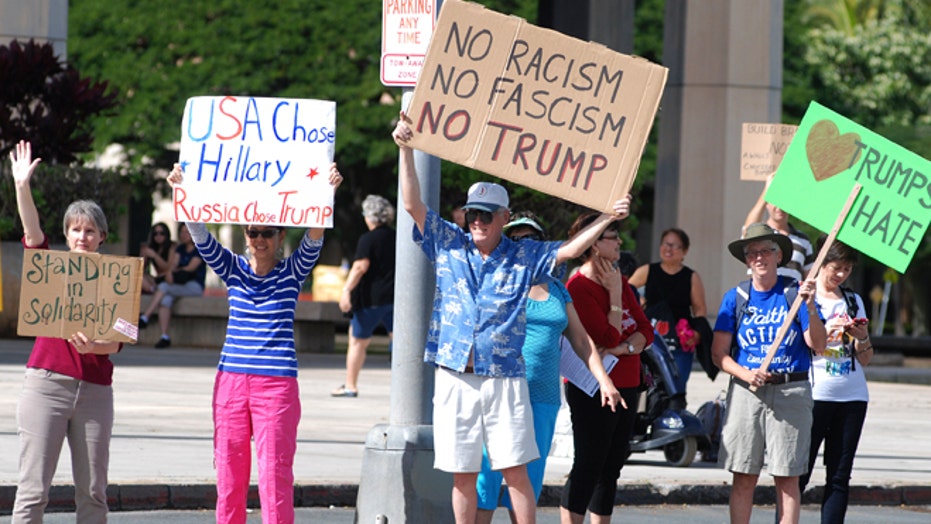 What is next for the 'Never Trump' movement?

A last-ditch effort by die-hard Donald Trump foes to derail the president-elect’s victory in the Electoral College fell flat Monday, leaving the never-Trump movement licking its wounds and looking to 2017 for ways to thwart Trump’s presidency and agenda.

The push to deny Trump the requisite 270 electors and send the election to the House of Representatives seemingly was doomed from the start, though it received significant media attention. In the end, only two Republican electors broke ranks – more defected on the Democratic side from Hillary Clinton.

What comes next for anti-Trumpers isn't entirely clear.

Some are preparing to attack him over his business ties, while the "I" word already is being bandied about.

Liberal filmmaker and activist Michael Moore tried to crowdsource ideas after the Electoral College flop, asking, “He's not president for four and a half weeks. Next idea?”

The Hamilton Electors – the group of electors behind the push to deny Trump 270 votes – published a statement Monday indicating their fight was not over, urging supporters to "stay tuned."

“Hamilton Electors hope this watershed moment will lay the groundwork for the emerging grassroots resistance to Trump’s agenda,” the statement read.

Texas Republican elector Chris Suprun, who voted for Ohio Gov. John Kasich on Monday, hinted that a push for Trump's impeachment could be in the works.

“As a person who has always played fast and loose with the law, Trump will likely be impeached within the first year of his Presidency by responsible Republicans in Congress. For the rest of us Americans, his presence in the Oval Office represents a crisis for the Constitution, the economy and the country,” he said in the statement.

Republican lawmakers and mainstream conservative voices for the most part have indicated they're ready to work with Trump. Some were buoyed by conservative picks in his Cabinet such as Rep. Tom Price, R-Ga., for Health and Human Services secretary and Sen. Jeff Sessions, R-Ala., for attorney general.

President Obama and Hillary Clinton, too, signaled immediately after the election that Democrats should give Trump a chance.

But some Trump critics remain, if nothing else, on high alert for any constitutional violations from the Trump presidency.

Independent presidential candidate Evan McMullin tweeted Tuesday what he called a “call to action” from Washington Post columnist Michael Gerson, a former Bush speechwriter. Gerson called on citizens to defend the legislature and judiciary from “any encroachment,” and defend people from “organized oppression, including Muslims and refugees.”

A call to action from principled conservative @MJGerson during the Trump years: "Defend every group of people." https://t.co/ppUt4dpeD0 pic.twitter.com/mhRnVTlm1E

With Trump's inauguration now inevitable, his foes may turn next to battling his Cabinet picks.

Some dissent has been bubbling over the choice of ExxonMobil CEO Rex Tillerson as secretary of State, with Sen. John McCain, R-Ariz., warning that Tillerson’s relationship with Russia is “a matter of concern for me.”

Sen. Elizabeth Warren, D-Mass., and other Democratic allies also are eyeing a fight over Trump’s business interests. Last week, five Democratic senators including Warren announced they would introduce legislation to require Trump to divest assets that could be a conflict of interest, and put them into a blind trust.

Sens. Ben Cardin, D-Md., Chris Coons, D-Del., Dick Durbin, D-Ill., and Jeff Merkley, D-Ore., are all backing the bill, which would deem a violation of conflict-of-interest laws “a high crime or misdemeanor under the impeachment clause of the U.S. Constitution.”

"The American people do not want the President encumbered by conflicts of interest that put him in violation of the Constitution or US law," Cardin said in a statement.

This isn’t the only sign Democratic lawmakers are gearing up for an impeachment threat sometime in the future. Politico reported Wednesday that House Democrats have held a mock hearing on Donald Trump’s conflicts of interest, using staging, television cameras and testimony from witnesses.

The narrative that Trump could run afoul of the Emoluments Clause -- which bars government officials from receiving gifts from foreign states -- is gaining support from some progressive voices.

GQ’s Keith Olbermann said in a video that Trump is a “moving, breathing conflict of interest who will likely be guilty of impeachable high crimes and misdemeanors within hours if not minutes of his inauguration.”

“The only appropriate response is to completely divest on December 15 and therefore avoid potentially becoming a walking Article of Impeachment beginning on January 20,” he said.

Republican officials, meanwhile, argue it's time for those fighting his presidency to stand back.

After the Electoral College decision on Monday, RNC Co-Chair Sharon Day said in a statement:

“This historic election is now officially over and I look forward to President-elect Trump taking the oath of office in January. Our unified Republican government will hit the ground running next year so we can deliver real change and make America great again. For the good of the country, Democrats must stop their cynical attempts to undermine the legitimacy of this election, which Donald Trump won decisively in the Electoral College with more votes than any Republican since 1988.”