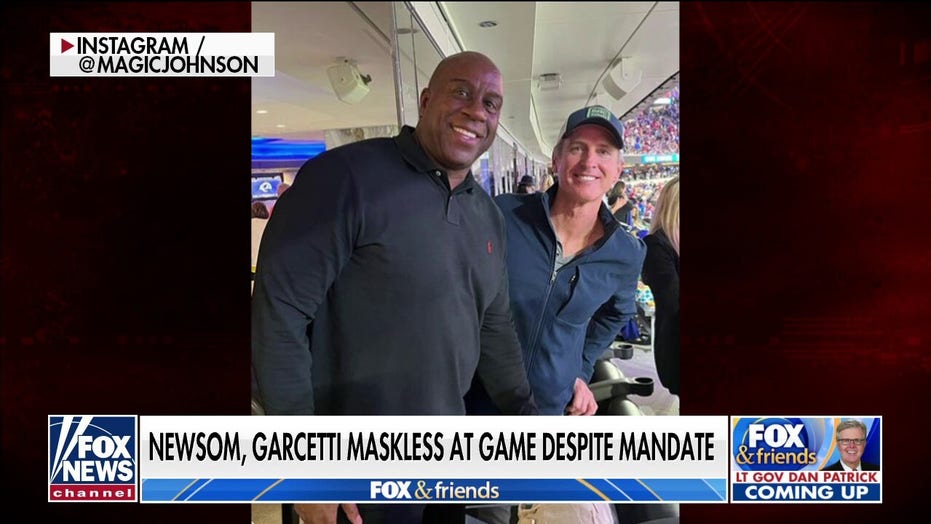 ‘Fox & Friends’ discusses Democratic leaders Gavin Newsom and Eric Garcetti being caught without their masks at the conference championship game.

Gov. Gavin Newsom and other Democratic California leaders were spotted maskless at the 49ers-Rams game despite the state’s universal indoor mask mandate.

None of the California leaders or Johnson were wearing masks in the photos. California implemented a universal indoor mask mandate in December that was extended to run through Feb. 15.

SoFi Stadium, located in Inglewood, also has a mask policy requiring all fans to mask up unless they are eating or drinking.

Johnson’s photos don’t show the California Democrats eating or drinking. Actor Rob Lowe is also seen in one of the photos not wearing a mask.

Newsom and Breed have both faced controversy in the past for not wearing masks despite mask mandates in their state.

Newsom faced a recall vote last year that was partially fueled by outrage after photos of him in the swanky restaurant the French Laundry circulated in 2020, showing him socializing with a large group of people from outside his household while not wearing a mask. Newsom ultimately defeated the recall.

PHOTOS EMERGE OF NEWSOM INSIDE POSH RESTAURANT AMID CORONAVIRUS SPIKES

The press offices for Breed and Garcetti did not immediately respond to Fox News’ requests for comment on the maskless photos.

"The Governor acknowledged that he took off his mask for a few moments during Sunday’s game. He continues to encourage all Californians to do their part to get through the pandemic and this latest surge, including wearing a mask and getting vaccinated," Erin Mellon, communications director for Newsom's office, said in a statement to Fox News.

Critics of the photos sounded off on social media, calling it another example of Democrats imposing "Rules for thee, but not for me."

SoFi Stadium will also host the Super Bowl on Feb. 13, when the Rams will face off against the Bengals. All fans will be given KN95 masks for the game and will be required to show proof of vaccination or provide a negative PCR test that was taken within 48 hours prior to showing up to the gates.