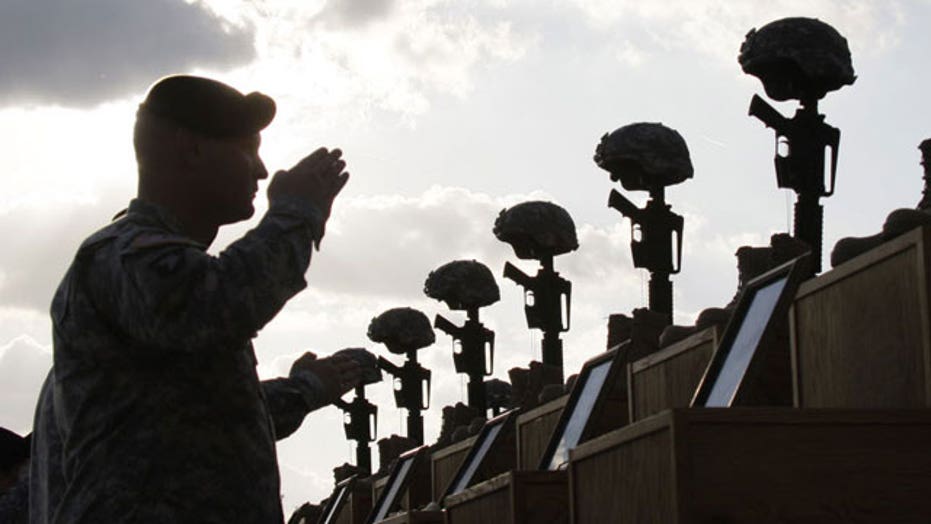 A lawyer for victims of the 2009 Fort Hood shooting and their families says the combat-related benefits that come with the Purple Heart -- now being considered thanks to new legislation -- will be a lifeline for many of his clients, who are still so damaged physically and mentally they are unable to work five years after the massacre.

"No one will be the same," Neal Sher told Fox News. "The people who have PTSD (post-traumatic stress disorder) -- both those who were hit by bullets and others who were in that area -- that is a very, very debilitating condition. And they're suffering on a daily basis. And as I said, families have been broken apart."

The legislation that funds the Defense Department in 2015, known as the NDAA or National Defense Authorization Act, includes new language that requires the Pentagon to reconsider whether the victims of the Fort Hood massacre qualify for the Purple Heart -- one of the department's highest honors.

The lawyers representing the families, Sher and Reed Rubenstein, have filed a petition asking DOD to begin the review as Congress directed, since so far the Pentagon has denied the award to the Fort Hood victims.

Fox News was first to report that the massacre, in which 13 were killed and more than 30 wounded when former Army psychiatrist Nidal Hasan opened fire from a desktop after shouting “Allahu Akbar” or God is great, was classified as “workplace violence.”

There appears no doubt that Hasan was motivated by his extreme religious views and by the radical American cleric Anwar al-Awlaki, who, at the time, was a leader of Al Qaeda in Yemen.  After his August 2013 conviction, Hasan told his lawyer, John Galligan, to release letters to Fox News in which Hasan pledged his allegiance to Abu Bakr al-Baghdadi, the leader of ISIS, and also wrote to Pope Francis about the virtues of Islam.

Sher told Fox that there was stiff resistance to the NDAA's new language. "The administration and the Pentagon," Sher explained, "they lobbied hard against it. But we worked very hard and we were successful in garnering bi-partisan support for this."

In a statement, Texas GOP Senator John Cornyn, who along with others supported the new language, said it brings the victims a step closer to the recognition they deserve.  “Fort Hood has long been a source of pride for all Texans, and though long overdue, this is welcome news for the wounded, the families of the fallen, and the entire community who all continue to heal from this unspeakable tragedy," he said.

The Republican chairman of the House Homeland Security committee, Texas Rep. Mike McCaul, thanked fellow Texas GOP lawmakers John Carter and Roger Williams for leading the effort.  “It is my hope that those affected by this terrorist attack will find a sense of justice that has been denied for too long. I urge President Obama to sign this legislation honoring our heroes and their families," McCaul said.

Aside from the benefits for the families, Sher said the Purple Heart, or its civilian equivalent, will go a long way toward recognizing the suffering and mitigating the insult of calling it workplace violence.

"For these people many of whom have been struggling mightily since this event took place and since they've been given the back of their hand by their own government, it will make a difference in the way they live. And it's long, long overdue," Sher said.

Defense Department Spokesman Lt. Cmdr. Nate Christensen said, "...the Military Department Secretaries will review all incidents that have occurred since September 11, 2001, that may qualify for award of the Purple Heart under this updated criteria and make a determination of eligibility for award. We anticipate a determination on all such incidents, including the attack at Fort Hood in 2009, in the near future."