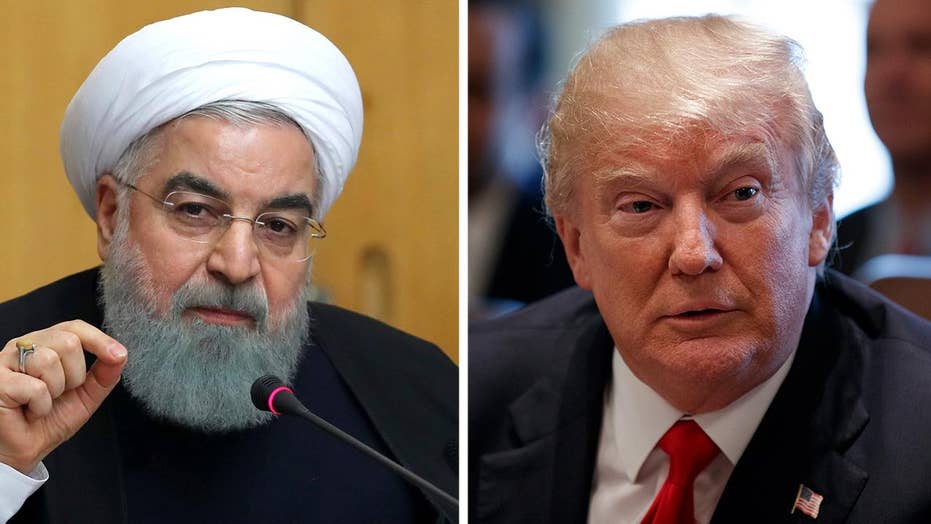 Trump to decide on Iran sanctions relief in coming days

The president must decide whether to continue waiving sanctions against Iran and also tell Congress whether Iran is complying with the major components of the agreement; Rich Edson has the details for 'Special Report.'

President Trump can withdraw the United States from the Iran nuclear agreement over the next week, though sources close to the process say he'll likely keep the U.S. in the deal for now, essentially holding together an agreement he says he loathes.

Over the next several days, President Trump must decide whether to continue waiving sanctions against Iran that were lifted as part of the 2015 Iran nuclear agreement. Within the week, the administration must also tell Congress whether Iran is complying with the major components of the nuclear deal.

In October, the administration, for the first time, refused to certify Iran’s compliance. That kept the U.S. in the deal but gave Congress a greater role in developing Iran strategy.

“The president said he is either going to fix it or cancel it,” Secretary of State Rex Tillerson told The Associated Press last week. “We are in the process of trying to deliver on the promise he made to fix it.”

Lawmakers are considering reducing how often the president must make these decisions on waivers and certifications. They’re also debating stronger enforcement of the nuclear deal, and more measures to penalize Iran’s ballistic missile program.

Sources close to the discussions said Tillerson met Wednesday at the White House and this weekend at Camp David with the president to discuss these deadlines and broader Iran policy.

"The goal is actually to get a better deal,” said Behnam Ben Taleblu, a senior Iran analyst at the Foundation for Defense of Democracies. “The way you do that is to create the conditions through more pressure and also to regovern the way under which the U.S. is party to the deal and to tighten the conditions for sanctions relief and clarify the path ahead.”

These deadlines arrive amid reports from Iran that the government there is arresting, torturing and killing those who have protested across the country.

"Iran's regime claims to support democracy, but when its own people express their aspirations for better lives and an end to injustice, it once again shows its true brutal nature," said a statement from the White House press secretary.

The administration also said it wants Iran to release all political prisoners.

“It's absolutely true that the protests in Iran are affecting the calculus over the decision to waive sanctions on Tehran,” said Taleblu. However, he said, the “decision to remain in the nuclear deal and waive sanctions is driven by attempts” to change Iran policy in Congress.

While the U.S. lobbies the allies that also signed the nuclear deal to support changes to the agreement, European diplomats are to meet Thursday with Iranian Foreign Minister Mohammad Javad Zarif. The Europeans will reportedly reassure Iran that they remain committed to the deal.

Zarif claimed the U.S. “has failed to observe its obligations under the agreement but has taken a destructive policy course.”

The Trump administration has already increased sanctions on Iran, unrelated to the nuclear agreement, for its missile program, terrorism financing and other destabilizing activities around the region.