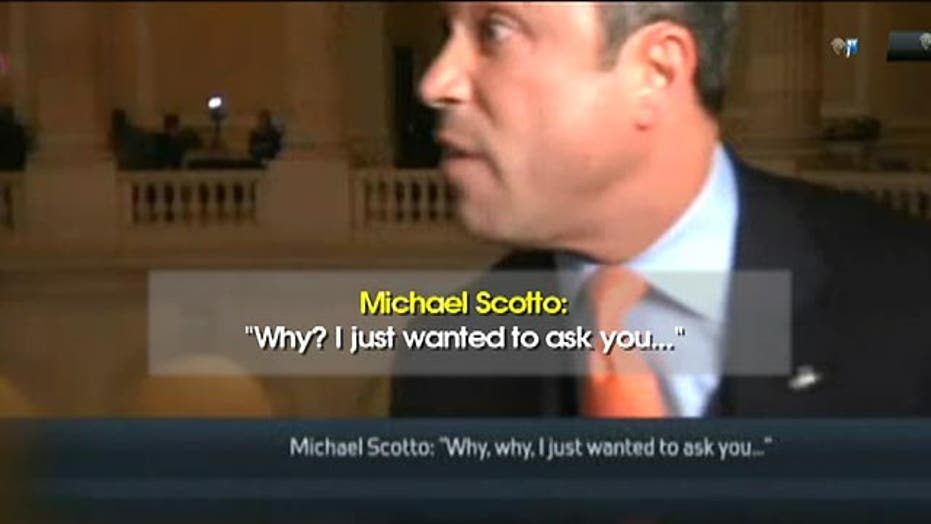 It's natural to distill great works of literature and cinema into single scenes.

"Where's Papa going with that axe?" wrote E.B. White at the very beginning of "Charlotte's Web." The line is so simple. Yet the innocence of the question cuts to the bare conflict of the spider-pig saga, and foreshadows the morality play.

"It was the best of times, it was the worst of times," penned Charles Dickens in launching "A Tale of Two Cities." Everyone knows the quotation even if they haven't read the book.

Alfred Hitchcock's "Psycho" is reduced to the famous shower episode. Jack Nicholson defines "The Shining" when he hacks his way through a door and shouts "Here's Johnny!" Who can forget Rocky Balboa bounding up the 72 steps at the Philadelphia Museum of Art?

Leitmotifs are not just the stuff of books and film. In fact, they serve as quintessential markers in political scandals. They illustrate the politician in question, their transgression and his or her ignominy.

Such is the case with Rep. Michael Grimm, R-N.Y. He pleaded guilty Tuesday in federal court to a single charge of tax evasion. People may not be familiar with the particulars of the congressman's 20-count, federal indictment which accused him of everything from mail fraud to lying under oath while operating a now-defunct restaurant called "Healthilicious." All of that is in the fine print.

Instead, Grimm's scandal is encapsulated in a brutish exchange with NY1 congressional reporter Michael Scotto following President Obama's State of the Union address in January. After Obama's speech, Scotto interviewed Grimm on-camera from the third-floor Rotunda in the Cannon House Office. Near the end of the interview, Scotto follows up about the federal probe involving Grimm. The congressman is having none of it. In fact, Scotto doesn't even get the question out. Scotto only offers up the preface "since we haven't had a chance to talk about."

Grimm cuts him off.

"I'm not talking about anything that's off-topic. This is only about the president," fumes Grimm before storming away.

A somewhat bewildered Scotto then turns to the camera. He tells viewers that Grimm "doesn't want to talk about some of the allegations concerning his campaign finances. We wanted to get him on-camera about that but as you saw, he refused to talk about that."

Scotto then tosses back to his colleagues in the studio in New York. But that's not the end of it. Grimm returns to the camera frame and blusters about tossing of another kind.

A former undercover FBI agent and Marine, Grimm stands around 5'8". But he's built powerfully with broad shoulders and thick arms. Grimm towers over the reedy Scotto, backing the reporter out of the picture.

"Let me be clear to you. You ever do that to me again and I'll throw you off this f---ing balcony," warns Grimm.

"It's a valid question," Scotto protests.

And so goes the Grimm narrative. He may be a convicted felon. He could face anywhere from one to three years in a federal prison. He may be a tax cheat. He may not hold his congressional seat. In fact, the line of questioning Scotto hoped to pursue touched on the congressman's ethics challenges. Yet the entire episode is concentrated into Grimm's hectoring of Scotto and the consequences of being chucked off the mezzanine.

This is how people track political scandals.

Former Rep. William Jefferson, D-La., is serving the longest-sentence ever meted out to a lawmaker (13 years) for accepting bribes on behalf of a tech company and currying favor with African leaders. When FBI agents raided the congressman's home in 2005, they unearthed $90,000 in cash stuffed inside boxes of Boca Burgers and Pillsbury Pie Crust in Jefferson's freezer.

A spokesman for former South Carolina governor and current Rep. Mark Sanford, R-S.C., made headlines when his boss disappeared for six days in 2009. The flak explained that the governor was away, hiking the Appalachian Trail. Turns out he wasn't. The married Sanford had traveled to Argentina and was conducting an affair with Maria Belen Chapur. Sanford and his wife Jenny split. The now-congressman later engaged Chapur but broke it off in September.

Narrative: "Hiking the Appalachian Trail" is now a euphemism in American politics.

Former Rep. Anthony Weiner, D-N.Y., found himself in hot water when he sexted inappropriate pictures to women. Weiner later resigned and tried to run for mayor of New York. At first, Weiner denied the photos were of him. In fact the New York Democrat told reporters he could not "say with certitude" that the photos depicted him. Later during the mayor's race, it was found Weiner sent additional photos to a woman while using the handle "Carlos Danger."

Narrative: No one will ever use the word "certitude" again. And everyone chortles at the vainglorious sobriquet, reminiscent of "Jonny Quest."

In 2007, police at the Minneapolis-St. Paul International Airport arrested then-Sen. Larry Craig, R-Idaho, for soliciting a cop during an encounter in the restroom. Police say Craig tapped his foot and inched closer to the foot of an undercover officer while sitting in a restroom stall. The arrest report stated that Craig told officers he possessed what they termed "a wide stance."

Some scandals foist labels onto lawmakers who get into trouble. Reporters dubbed former Rep. Trey Radel, R-Fla., the "Cocaine Congressman" after officers picked him up in a sting where he purchased coke outside a Washington, D.C., restaurant. A few months later, pundits deemed Rep. Vance McAllister, R-La., the "Kissing Congressman" after a security video showed him making out with an aide.

Former Rep. Eric Massa, D-N.Y., faced allegations of sexual harassment from male congressional staffers in 2009. During an appearance on Fox News, Massa contended that he not only groped an aide, but "tickled him until he couldn't breathe." Massa resigned after 14 months in office.

And then there are some political scandals that barely even qualify as scandals.

In 2011, then-Rep. Chris Lee, R-N.Y., who was married, sent shirtless pictures to a woman on Craigslist. Lee claimed he was a divorced lobbyist. The woman handed over the photos to Gawker. Lee wasn't accused of doing anything illegal. Just something odd which wasn't even lewd. The story broke on a February afternoon. Lee resigned his seat by 5:30 p.m. the same day and buzzed out of Washington.

Narrative: None evolved. The only narrative was Lee's breakneck departure from Congress.

The tales go on and on. They may reflect how sports aficionados condense major events into simple narratives. Try the phrase "wide right" on a Buffalo Bills fan sometime. A routine 1983 contest between the Kansas City Royals and New York Yankees is immortalized as the "Pine Tar Incident." You can strike up a conversation with any reputable Cincinnati Reds or Boston Red Sox partisan by simply uttering the phrase "Game Six." And the mere mention of "Steve Bartman" is sure to boil the blood of any Chicago Cubs loyalist.

This is how we classify and scrub political scandals, too. Balcony. Cocaine Congressman. Carlos Danger. Tickle fights. It's a form of short-hand. A sorting system  which political devotees deploy to stay current.

That's an important tool. Because everyone knows there's another political scandal lurking around the corner.