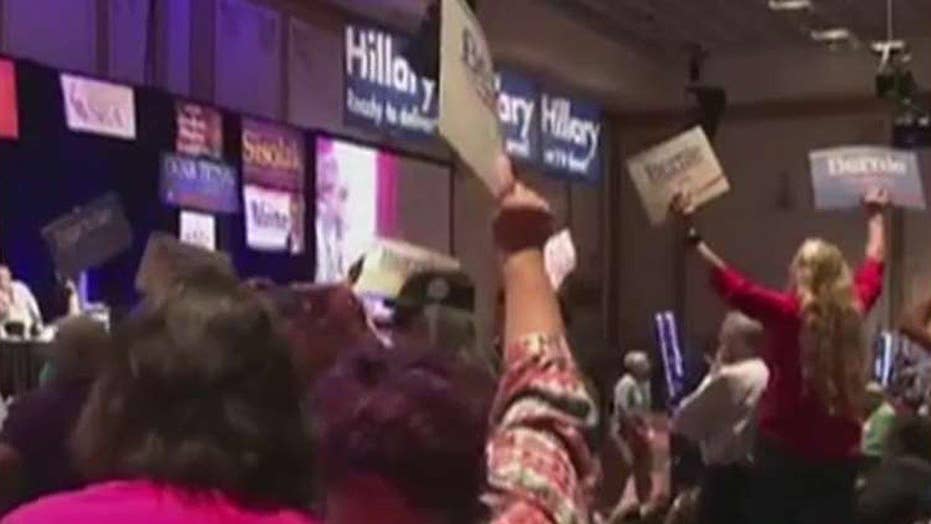 The allegation is the latest fallout from a divisive Nevada Democratic convention that had to be shut down Saturday night because security at the Paris Las Vegas hotel could no longer ensure order. The gathering closed with some Sanders supporters throwing chairs; later, some made death threats against state party chairwoman Roberta Lange.

Sanders had released a statement Friday night asking supporters to work "together respectfully and constructively" at the convention. But the state party alleged in its letter to the co-chairs of the DNC Rules and By-laws committee, "The explosive situation arose in large part because a portion of the community of Sanders delegates arrived at the Nevada Democratic State Convention believing itself to be a vanguard intent upon sparking a street-fight rather than attending an orderly political party process."

Michael Briggs, a Sanders campaign spokesman, said, "We do not condone violence or encourage violence or even threats of violence." He added that the campaign "had no role in encouraging the activity that the party is complaining about. We have a First Amendment and respect the rights of the people to make their voices heard."

On Saturday, Sanders backers shouted down the keynote speaker, Sen. Barbara Boxer, D-Calif., and others they thought were tilting the rules in Clinton's favor. Protesters shouted obscenities and rushed the dais to protest rulings.

"We believe, unfortunately, that the tactics and behavior on display here in Nevada are harbingers of things to come as Democrats gather in Philadelphia in July for our National Convention," the state party's general counsel, Bradley S. Schrager wrote in a letter to the DNC. "We write to alert you to what we perceive as the Sanders campaign's penchant for extra-parliamentary behavior — indeed, actual violence — in place of democratic conduct in a convention setting, and furthermore what we can only describe as their encouragement of, and complicity in, a very dangerous atmosphere that ended in chaos and physical threats to fellow Democrats."

Several Sanders backers have condemned some of the threats against Lange and other actions Saturday. Former state assemblywoman Lucy Flores, a current congressional candidate, said in a statement: "There were actions over the weekend and at the Democratic convention that very clearly crossed the line. Progressives need to speak out against those: Making threats against someone's life, defacing private property, and hurling vulgar language at our female leaders."

Lange said she'd been receiving hundreds of profanity-laced calls and texts from inside and outside of the U.S., threatening her life and her family. Lange said the restaurant where she works has received so many calls it had to unplug the phone.

"It is endless, and the longer it goes the worse it gets," Lange said in an interview. "I feel threatened everywhere I go."