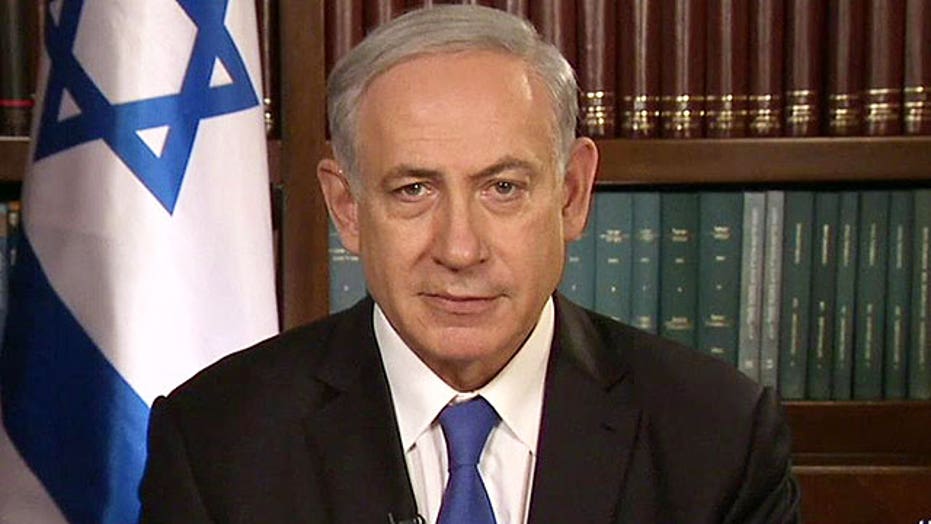 Netanyahu: Peace agreement must be negotiated, not imposed

Israeli Prime Minister Benjamin Netanyahu insisted Thursday on "The Kelly File" that he didn't reverse his campaign pledge earlier this week when he said he wouldn't support a two-state solution.

In a wide-ranging interview, Netanyahu, who will become prime minister for a third consecutive term, his fourth overall, also touched upon the Iran nuclear negotiations and the controversy surrounding comments he made Tuesday about Arab influence in the Israeli elections.

On Monday, Netanyahu, in the face of a seemingly deadlocked race, vowed there would be no Palestinian nation if he were re-elected, a seeming reversal from a 2009 speech he gave in which he backed the idea of a two-state solution. But Netanyahu's Likud Party ultimately triumphed, and on Thursday, Netanyahu seemed to dial back his remarks on the plan, which is a centerpiece of U.S. policy in the Middle East.

"I didn’t retract any of the things I said in my speech six years ago, calling for a solution in which a demilitarized Palestinian state recognizes a Jewish state," Netanyahu told host Megyn Kelly. "I said that the conditions for that, today, are not achievable for a simple reason: Abu Mazen, the leader of the Palestinians, rejects consistently the acceptance of a Jewish state. He’s made a pact with the Palestinian terrorist organization, Hamas, that calls for our destruction. And the conditions in the Middle East have changed to the point where any territory we withdraw from is immediately taken up by Iranian-backed terrorists or by ISIS."

Netanyahu also cautioned against the prospect of an agreement that would allow Iran to maintain 6,000 nuclear centrifuges, which he said would enable the rogue nation to "break out to a bomb very quickly."

"Increase the restrictions on Iran’s nuclear capabilities, so you increase the break out time, and don’t lift those restrictions until Iran stops fomenting terrorism and aggression and stops calling for Israel’s destruction," he said. "That’s the right deal."

Netanyahu also downplayed remarks he made on Tuesday in which he warned against Arab influence in the election, saying that the comments were taken out of context and that he was referring to foreign money that he said was being spent in an effort to defeat his re-election bid.

He closed the interview by affirming his obligation to keeping Israel safe, particularly during a time of turmoil in the Middle East.

"We’re the country that is most threatened with destruction around the world, and it’s my responsibility to ensure that this state, the one and only Jewish state, lives forever," Netanyahu said. "And that’s a big burden, but that’s why I’m here. That’s why I was elected."