President Trump's historic – and controversial – decision to relocate America's Israel embassy to Jerusalem is attracting more followers on the world stage, as several other nations open their own outposts in the holy city or consider doing so.

Slovakia last week became the latest Eastern European country to flirt with the idea of moving its embassy, when lawmakers announced the country would open a cultural center in Jerusalem.

The tentative step speaks to the flickers of international support that have emerged for Trump's decision, despite the United Nations' overwhelming condemnation of the related move to recognize Jerusalem as Israel's capital.

Guatemalan President Jimmy Morales was among the first to outright endorse the decision. Just two days after the U.S. opened its embassy doors in Jerusalem, he and Israeli Prime Minister Benjamin Netanyahu shook hands as the Central American country opened its own embassy in an office complex in West Jerusalem.

Trump’s decision last December to recognize Jerusalem as Israel’s capital – and approve the embassy move from Tel Aviv – reversed a decades-old U.S. policy and stirred anger among many in the Arab world and America's Western allies. Netanyahu, however, praised the U.S. and later praised Guatemala’s decision, saying that the two countries “share friendship, courage and loyalty.”

“It’s not a coincidence that Guatemala is opening its embassy in Jerusalem right among the first,” Netanyahu said in reference to Israel’s founding in 1948, according to the Washington Post. “You were always among the first. You were the second country to recognize Israel.” 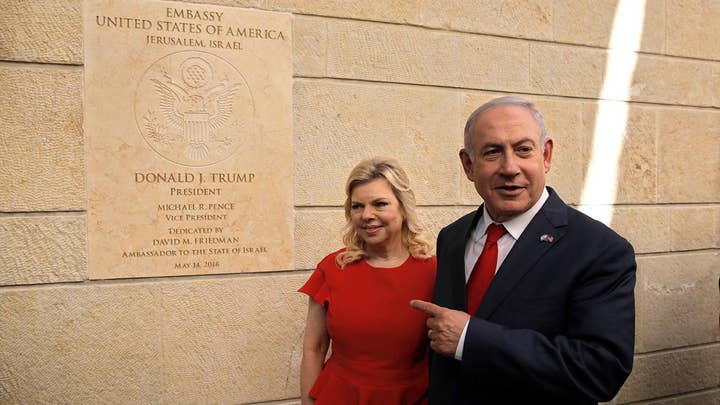 Less than a week after Guatemala’s embassy opening, Netanyahu was once again shaking hands with a Latin American leader. This time it was Paraguayan President Horacio Cartes at the inauguration ceremony for the South American nation’s embassy in Jerusalem.

The opening of the Guatemalan and Paraguayan embassies came on the heels of a decision in April by lawmakers in Honduras to move its Israeli embassy to Jerusalem, though the measure is non-binding and currently no official move from Tel Aviv has taken place.

Experts say that part of the reason these Latin American nations are recognizing Jerusalem as Israel’s capital and relocating their embassies there has to do, in part, with the rise of evangelical Christianity in the region. But the embassy moves are also seen as political maneuvering to curry favor with the U.S in the hopes of preserving foreign aid and easing some pressure on them in regards to the current migration crisis.

“This is a low cost way to ingratiate themselves to the U.S.,” said Eric Olson, the deputy director of the Latin American program at the Wilson Center. “They’re using it as an opportunity to make the case for more aid to deal with migration issues. It’s playing good defense with the U.S.”

The status of Jerusalem is arguably the touchiest issue when it comes to forging a peace deal between Israel and the Palestinians, who want control of East Jerusalem, which was captured by the Israelis in the 1967 Six-Day War. Israel, however, regards the entirety of Jerusalem as the country’s capital.

The opening of the U.S. embassy was met with clashes between Palestinian protesters and Israeli troops in which dozens of Palestinians were killed or wounded.

Besides fueling a long-running conflict between Israel and the Palestinians, the status of Jerusalem has divided world powers. The United States' about-face under Trump was met with widespread condemnation from many allies, including the European Union, which believes the final status of Jerusalem should be decided in peace negotiations between the Israelis and Palestinians.

Flags of the European Union. (Reuters)

Despite the grumbling from leaders in Brussels over Trump’s embassy relocation, not all European nations fell in line with the policy after the U.S. moved its embassy. While the EU officially boycotted the ceremony to celebrate the new U.S. embassy, four of its member nations – Austria, Romania, Hungary and the Czech Republic – accepted Israel’s invitation to attend and, in the proceeding months, some European countries have made headway in moving their own embassies to Jerusalem.

In late May, the Czech Republic reopened its honorary consulate in Jerusalem after President Milos Zeman voiced his wish to move the Czech embassy to the city from Tel Aviv. Zeman is known for his pro-Israel stance, but the Czech Foreign Ministry said to Israeli media that the decision to reopen the honorary consulate had “no influence on the final agreement on Jerusalem,” and added that Prague “fully respects the common position of the European Union that considers Jerusalem as the future capital of both states, that is to say, the State of Israel and the future state of Palestine.”

After a phone call with Bulgarian Prime Minister Boyko Borissov in June, Netanyahu announced that Bulgaria was following in the Czech Republic’s footsteps by opening its own honorary consulate in Jerusalem, while keeping its embassy in Tel Aviv.

And in Romania, a major political rift has opened over a proposal to move the country’s embassy, with President Klaus Iohannis calling on Prime Minister Viorica Dancila to resign after she endorsed a secret deal to move the country's embassy in Israel to Jerusalem. In Romania, any decision on embassy relocation rests with the president, who said he was not consulted about that or the state visit Dancila paid to Israel in the spring.

"A secret document, a secret foreign policy memorandum, was discussed last week in the government. That was a big mistake," Iohannis said, according to the CBC. "Because in foreign policy matters, if we are talking about secret documents, which obviously are sensitive otherwise they should not be secrets, the president should have been consulted, which did not happen."