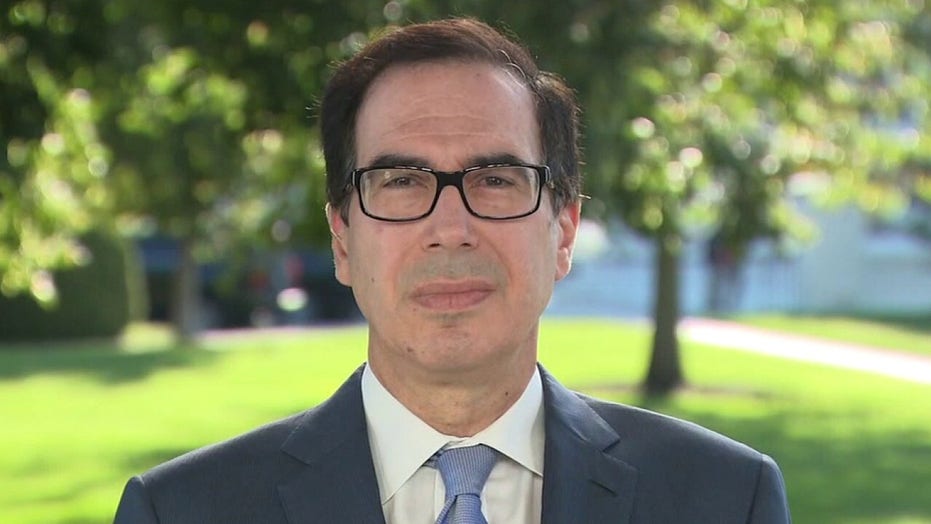 Treasury Secretary Steven Mnuchin said Sunday that while House Speaker Nancy Pelosi is refusing to negotiate a new coronavirus stimulus package unless Republicans are willing to spend at least $2.5 trillion, she has agreed to a continuing resolution that will keep the government from shutting down.

"We are going to do a clean CR," Mnuchin told "Fox News Sunday," saying that while it is uncertain how long it will keep the government going, he believes it would go "through the beginning of December.”

Mnuchin said he hopes progress will be made on the continuing resolution “by the end of the week.”

The secretary said that the CR will be separate from negotiations for a new CARES Act-like stimulus bill. He that said while Pelosi wants a large-scale package, he believes a narrower approach is more prudent at this time.

Shifting gears to international relations, Mnuchin addressed the question of whether the U.S. will impose sanctions on Iran, after countries who are still part of the Iran nuclear deal said the U.S. does not have standing to do so.

"We will," Mnuchin said. "I think our allies understand that selling arms to Iran right now would be perhaps the worst decision that one can do. We're talking about the No. 1 country in the Middle East that has created terror around the Middle East."

Mnuchin said that President Trump will not allow Iran to acquire a nuclear weapon or hurt American allies in the region.

The secretary later shot down the notion that President Trump lacks respect for American veterans, following a report in the Atlantic that he disparaged those who have served in the armed forces.

"Quite the contrary. This president supports the military in an unbelievable way," Mnuchin said.

Lastly, Mnuchin looked ahead to the future and the need to tackle the national debt.

"Before we got into COVID I thought the debt was very manageable," Mnuchin said, noting that the pandemic has justifiably changed this.

"This is like a war," he said. "In a war, you've got to spend whatever you need to spend."

He said that after the pandemic becomes a thing of the past, the government can get back to managing the debt.

"Once the economy is back, we will focus on this issue."