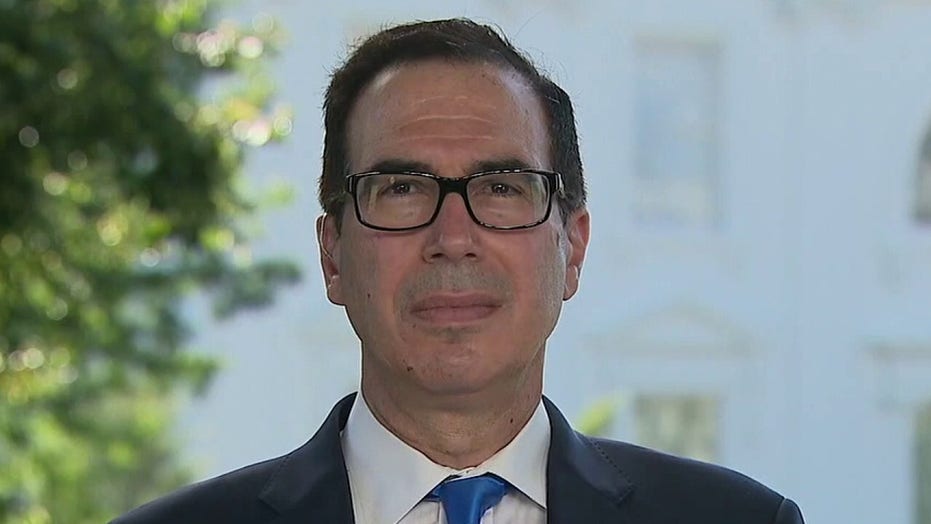 Secretary Mnuchin on negotiations for additional COVID relief, heath of US economy

Treasury Secretary Steve Mnuchin said, during an interview on "Fox News Sunday," that after weekend discussions he remains optimistic regarding a second coronavirus stimulus package, with Senate Republicans planning to introduce a bill Monday -- with just 100 days before the presidential election.

The bill comes as a number of benefits under the previous CARES Act bill are set to expire.

SCALIA TALKS UNEMPLOYMENT AND THE NEXT CORONAVIRUS STIMULUS

Mnuchin also noted that due to resistance from Democrats, a payroll tax cut – which President Trump had hinted could be a deal-breaker for him if not included in a stimulus bill – will not be part of the current package after all. A number of Republicans were against it, as well.

“That’s something the president will come back and look at later in the year,” Mnuchin said, claiming that direct payments to Americans – which were part of the CARES Act and are expected to be part of a new bill, as well – provide faster relief.

“The direct payments are a much quicker way of effectively giving everybody a tax cut, and is much quicker than the payroll tax cut,” he said.

Meanwhile, key parts of the CARES Act are set to expire in the near future. The Paycheck Protection Program that provides small businesses with forgivable loans, is set to end in early August, and the enhanced unemployment insurance benefits will expire on July 31. A federal eviction ban already ended on July 25.

Mnuchin said that the new bill will provide additional unemployment benefits, but noted that it will be less than the payments issued under the CARES Act, because some workers were collecting more than they earned on the job. As a result, when businesses were reopening some employees did not have an incentive to return to work.

Mnuchin said that upcoming unemployment benefits would be in the form of 70 percent wage replacement.

"I think workers and Americans understand the concept that you shouldn't be paid more to stay home than to work," he said.

Mnuchin said that the Trump administration and Senate Republicans are on the same page with a $1 trillion package, but noted that in the interest of passing a bill quickly, issues that are more difficult to negotiate with Democrats could be held off for another bill.

"This will be the fifth set of legislation, so there's no reason why we can't have number five, six, and seven as we need to deal with issues, and obviously anything we do, we need bipartisan support," he said.