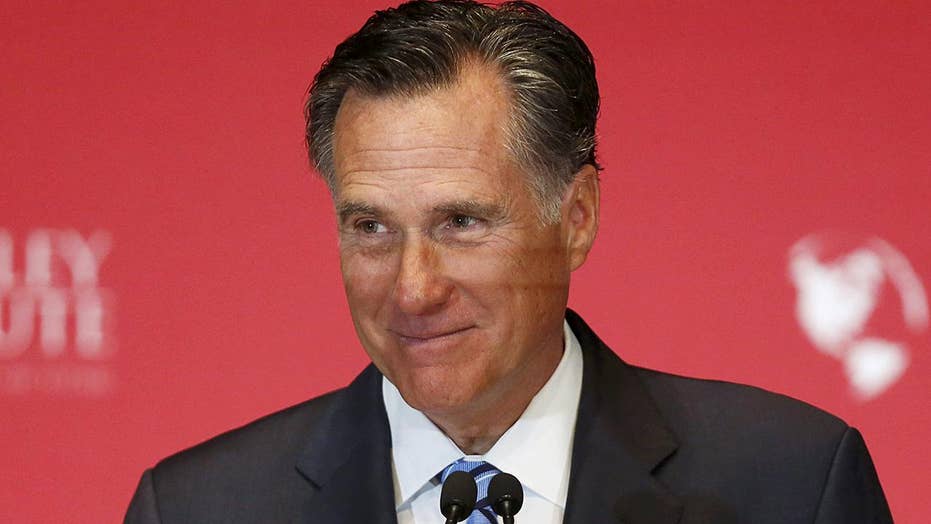 Mitt Romney: I want to bring Utah's values to D.C.

Romney, 71, officially announced he was running for Senate in February.

“I believe I can help bring Utah’s values and Utah’s lessons to Washington,” Romney said in a video at the time. “Let there be no question – I will fight for Utah.”

From his governorship to founding Bain Capital, here’s a look at Romney’s wide-ranging career.

Mitt Romney was born in Michigan, where his father was the 43rd governor. (2012 Getty Images)

Romney, whose full name is Willard Mitt Romney, was born in Detroit in 1947.

Romney’s political life didn’t begin with him -- his parents were also civic-minded.

Romney’s father, George W. Romney, was a three-term governor of Michigan. He served in this role from 1963 to 1969. After a failed run at the White House in 1968, he was the secretary of housing and urban development until 1973 under former President Richard Nixon.

Mitt Romney's mother, Lenore, was also politically active; after serving as Michigan’s first lady, she was the 1970 Republican Senate nominee from Michigan.

But as a former actress, Lenore didn’t have much political experience. Indeed, “the children laughed about it. Then Mitt, first, and gradually the others, began to change their minds. "They finally decided she should go with it,” Elly Peterson, a Romney confidant, once wrote in a memoir, according to The New York Times. Lenore Romney later lost the race to Phil Hart, then the Democratic incumbent.

“Lenore was no George as a political candidate,” Bill Ballenger, former editor of the newsletter Inside Michigan Politics, told The Times in 2012.

Mitt Romney graduated in 1971 from Brigham Young University and later received a dual law and business degree from Harvard. He graduated from the Ivy League school in 1975.

After working for Boston Consulting Group once he graduated from Harvard, Romney was hired by the management consulting firm Bain & Company. He later became the vice president of the company but left in 1985 to start Bain Capital, a private equity firm.

Bain Capital invested in multiple companies, such as Staples, Brookstone, Domino's Pizza and others.

Romney returned to Bain & Company in the early 1990s when the firm was facing financial hardship. The company asked him back to help "develop and execute a turnaround plan," according to a 2012 press release from the firm.

Not long after, however, his career path took a turn: Romney announced he was running for the U.S. Senate in Massachusetts.

In this 1994 photo, Mitt Romney and his wife Ann thank supporters after he won the Republican nomination for Senate. Romney would lose the race to incumbent Sen. Ted Kennedy, D-Mass. (Reuters/Brian Snyder)

Romney unsuccessfully challenged incumbent Sen. Ted Kennedy, D-Mass., in 1994. Although Kennedy won, The New York Times described the race as “the biggest scare of his political life” at the time.

The race was Romney’s first venture into the political arena, and he beat fellow businessman John Lakian for the GOP nomination.

Some of the stances Romney took during the election would later come back to haunt him as he ran for different offices -- especially his view on abortion. At the time, Romney supported legal abortion but opposed requiring states to pay for it, except in the case of rape or incest or if the mother’s health was in danger, according to The New York Times.

Overall, his views on abortion have shifted throughout the years.

In 1999, Romney became the president of the Salt Lake Organizing Committee, an organization behind the 2002 Winter Olympics in Salt Lake City, Utah. Romney was hired shortly after the committee faced a widely-publicized bribery scandal.

Overall, Romney was praised for his work during this time.

“Mitt will be a golden boy after the Olympics,” a Boston political consultant, Rob Gray, told The New York Times in 2002, shortly before the games. “Politically, or however you want to look at it, he took on corruption, turned around a major financial deficit, is on the verge of pulling off a huge international event, and he did it all as a volunteer, out of duty to his country.”

During the Utah Economic Outlook and Policy Summit in mid-January 2017, Romney said serving in the role was the "best experience of my life."

Romney was elected governor of Massachusetts and took office in 2003, replacing the acting governor, Jane Swift. He served as governor until 2007.

During his tenure, Romney led efforts to reduce the state’s $3 billion deficit. A health care reform package also passed during his governorship. The legislation, which Romney signed in 2006, expanded health insurance coverage to nearly all Massachusetts residents. More commonly known as RomneyCare, it also aimed to control costs while expanding health coverage.

In 2010, a few years after the law took effect, 6.3 percent of non-elderly Massachusetts residents were uninsured, according to the Kaiser Family Foundation. The U.S. average at the time was 18.4 percent for non-elderly people.

However, critics argued that Romney's key legislation was not as effective as Romney had hoped when he signed the reform package.

For instance, while the subsidies under the plan increased the number of Massachusetts residents with insurance, roughly 400,000 residents still failed to buy the insurance, which was required because of a mandate, according to the libertarian-leaning CATO Institute.

Still, some supporters of RomneyCare said it was a success that should never have been replaced by ObamaCare, former President Barack Obama's key healthcare legislation. Formally called the Affordable Health Care Act, the law was said to be modeled after RomneyCare.

“It’s a travesty,” Ryan Williams, a Republican consultant, said of ObamaCare during a 2014 interview with Politico. Williams also worked as an aide to Romney in Massachusetts and during the former governor's presidential campaigns.

Williams echoed this sentiment in an email to Fox News.

“It was a travesty when Democrats dismantled Governor Romney’s successful state based health care reforms and replaced them with ObamaCare’s disastrous, one-size-fits-all approach," he said. "Massachusetts would have been better off with the existing system that Governor Romney put in place.”

In February 2007, Romney announced his intent to run in the 2008 presidential election. Although he won many primaries on Super Tuesday, he ultimately lost the Republican nomination to Arizona Sen. John McCain.

After losing the Republican nomination, however, Romney endorsed McCain. McCain was defeated by Obama, the Democratic presidential nominee in the 2008 presidential election.

In June 2011, Romney once again announced his intent to run for president. In August 2012, he tapped Paul Ryan, now the speaker of the House, as his running mate.

Just over a year after he first announced his candidacy, Romney officially won the Republican nomination and gave an acceptance speech at the Republican National Convention.

Romney then faced off against Obama, who was seeking re-election. While Romney appeared to win the first presidential debate in October of that same year, according to many analysts, his campaign faced a lot of negative publicity.

In a video leaked by Mother Jones in 2012, Romney characterized many of Obama’s supporters as people “dependent upon government.”

“That’s an entitlement. And the government should give it to them. And they will vote for this president no matter what…These are people who pay no income tax,” he continued.

Romney was also attacked for his “binders full of women” comment, part of a response he gave during a 2012 debate when answering a question about workplace equality.

In a tight race, the former governor lost the 2012 presidential election to Obama.

Although President Trump and Mitt Romney often clashed, Romney was rumored to be his secretary of state. (Reuters/Mike Segar)

After reportedly considering another White House run, Romney told supporters he would not run in the 2016 presidential election.

After Trump was elected, speculation grew that Romney would be picked as the next secretary of state. Romney later confirmed that he would not take the job, though he wrote in a letter that he would’ve been willing to serve in the position.

Romney has been an outspoken critic of Trump both before and after the real estate mogul took over the White House.

In March 2016, Romney called Trump, who was the leading GOP presidential candidate at the time, a “phony” and “fraud.”

Romney said, “I understand the anger Americans feel today. Here's what I know. Donald Trump is a phony, a fraud. His promises are as worthless as a degree from Trump University. He's playing ... the American public for suckers: He gets a free ride to the White House and all we get is a lousy hat.”

In another shot at Romney, Trump tweeted in February 2016 that “Mitt Romney, who was one of the dumbest and worst candidates in the history of Republican politics, is now pushing me on tax returns. Dope!”

“Roy Moore in the US Senate would be a stain on the GOP and on the nation. Leigh Corfman and other victims are courageous heroes. No vote, no majority is worth losing our honor, our integrity,” Romney wrote.

In the end, Moore lost the election to Doug Jones, a Democrat.

Romney announced his Senate run in Utah on Feb. 16.

In a video posted to his social media accounts, Romney praised the character, work ethic and service of Utah residents.

“I have decided to run for United States Senate because I believe I can help bring Utah’s values and Utah’s lessons to Washington. Utah is a better model for Washington than Washington is for Utah,” Romney said.

“Given all that America faces, we feel this is the right time for me to serve our state and our country,” Romney said.

Romney also touted his success with bringing the Olympics to Salt Lake City in his announcement video.

In a tweet, Trump offered his support for Romney's campaign, calling him a "worthy successor" to Hatch.

"Thank you Mr. President for the support. I hope that over the course of the campaign I also earn the support and endorsement of the people of Utah," Romney said in response.