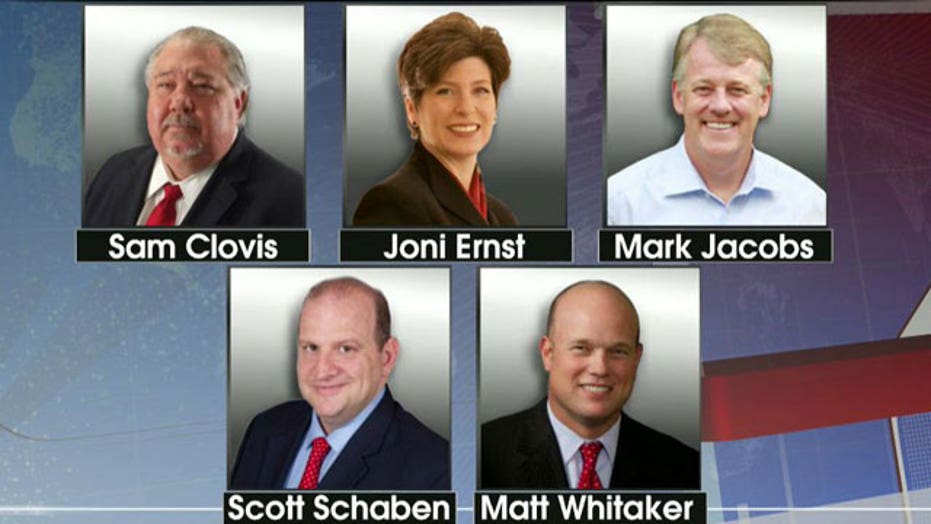 Voters head to polls for primaries in 8 states

The Tea Party challenger in the GOP primary for a Mississippi Senate seat has brought the race to a dead heat going into Tuesday’s voting, despite a scandal triggered by his supporters in the campaign's closing weeks.

State Sen. Chris McDaniel had trailed six-term incumbent Sen. Thad Cochran in essentially every poll since late 2013 and was behind by as many as 17 percentage points as recently as early April.

However, McDaniel has managed to close the gap, according to an averaging of polls by the website RealClearPolitics.com, even after four supporters were charged in connection with photographing Cochran's bedridden wife.

The men allegedly entered a Mississippi nursing home Easter Sunday where Rose Cochran, who suffers from dementia, is living to take the photo.

The dramatic race is one of numerous competitive primary contests across eight states on Tuesday. Mississippi, though, is considered most critical for the Tea Party as it tries to knock off an incumbent.

The 76-year-old Cochran has his own problems, dealing with allegations he was having an inappropriate relationship as a result of his bringing a female Senate aide on numerous official trips overseas.

Police said the four men conspired to use the images to advance allegations about the relationship, which Cochran has denied.

“Taking illegal photos of Rose Cochran in a nursing home is not merely creepy,” Republican strategist David Payne told FoxNews.com on Monday. “It’s bad campaigning; bad politics. And it shows poor judgment to invite a female aide on 42 international trips. But dwelling on these issues at the end of a primary campaign tarnishes both candidates.”

Cochran’s adult children say their father is devoted to his wife. McDaniel has denied involvement in the incident, calling it reprehensible.

Still, the matter has dominated the campaign's closing days, with each side accusing the other of underhanded politics.

Whoever wins Tuesday will be favored in November in the heavily Republican state.

Cochran has avoided making the incident a campaign issue -- preferring to let McDaniel defend himself, rather than attack him.

“If I’m working in support of the McDaniel campaign -- even if I’m an unaffiliated supporter -- there’s no need for acts of desperation in the final days of the primary,” said Payne, a vice president with Washington-based Vox Global. “Stay focused on the issues and run a highly professional campaign. McDaniel can win on Tuesday with this approach.”

McDaniel has gotten some outside support  from such groups as the anti-tax organization Club for Growth, FreedomWorks and the anti-establishment Senate Conservatives Fund.

The Mississippi race started in typical fashion: Cochran, backed by the Republican establishment, said he consistently steers federal money to the state. McDaniel said Cochran is insufficiently conservative. Then the race took a bizarre turn with the photographing incident.

Cochran is the Tea Party movement’s last chance this primary season to defeat a Republican incumbent whom they consider too willing to compromise and too chummy with big-money interests that drive politics.

Tea party-inspired efforts to win GOP Senate contests in Georgia and Kentucky failed earlier this year as the party establishment showered money on candidates such as Senate Republican Leader Mitch McConnell in Kentucky and Rep. Jack Kingston in Georgia.

Palin says in a 60-second radio ad that McDaniel is "running for the Senate to shake up the way things work up there."

McDaniel's cash-strapped campaign is paying for the ad featuring Palin.

Cochran's campaign has spent more than $3 million to fend off the challenge from McDaniel and his deep-pocketed allies. Of that, Cochran has spent $1.6 million since April 1 and has $681,000 in the bank.

But much of the money in this race is coming from outside groups. The Club for Growth has now spent more than $2.4 million on ads against Cochran.