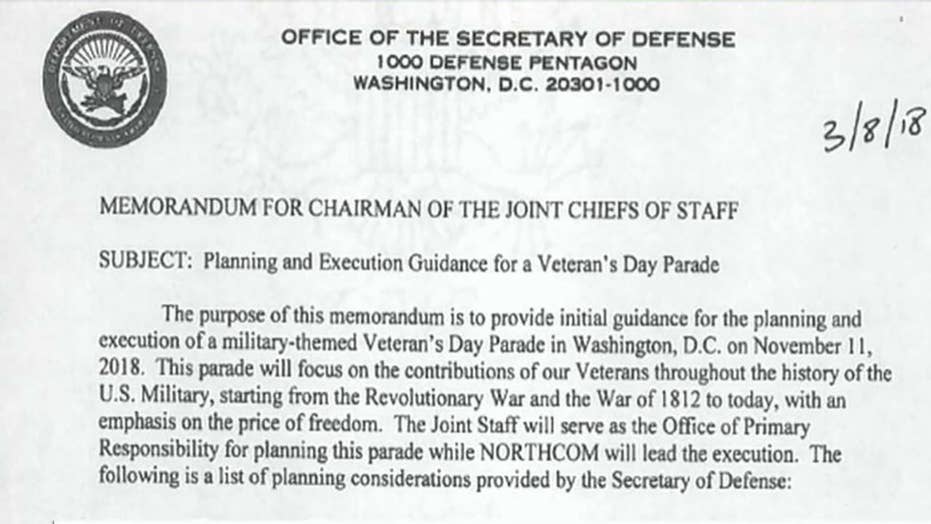 The military parade President Trump requested to be held later this year in Washington, D.C., is initially estimated to cost $12 million, a U.S. official told Fox News on Wednesday.

The number is only an estimate and could change based on the size and scope of the "military-themed Veterans Day Parade," the official added.

OPINION: TRUMP WANTS A MILITARY PARADE AND LIBERALS ARE HYSTERICAL (JUST MORE PROOF IT'S THE RIGHT THING TO DO)

The cost estimate falls roughly in line with the canceled U.S. military "war game" with South Korea, which was estimated to cost around $14 million — a cost Trump said was "tremendously expensive."

Trump's calls for a military parade a national security nightmare?

The White House confirmed this past February that Trump had asked for the parade.

The Pentagon is still planning the event, which Trump requested to run from the White House to Capitol Hill on Nov. 11. While suggested plans didn't include tanks, the Pentagon was considering an air demonstration and a representation of veterans in American history.

CNN was first to report the parade's estimated cost.

The planned parade is intended to highlight the contributions veterans have made "throughout the history of the U.S. Military," according to a note from Defense Secretary Jim Mattis's office. It would date back from the Revolutionary War to present day, "with an emphasis on the price of freedom."

Trump previously considered the idea of a military parade after attending France's Bastille Day in July 2017, a celebration he called "magnificent."