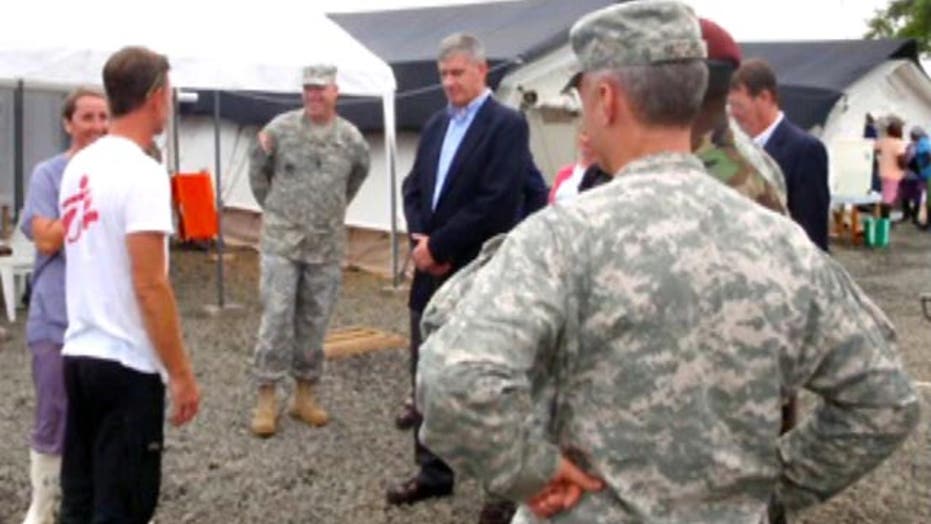 The military has begun medical testing for Ebola at two new labs in Liberia, and service members are starting to build two treatment centers there for victims of the deadly disease.

Navy Rear Adm. John Kirby, the Pentagon's spokesman, said Friday that based on the latest requests from U.S. commanders, up to 4,000 U.S. troops could be deployed to West Africa to provide engineering, logistics, medical and other support to the mission there. That number has been slowly climbing, as military leaders arrive in the Liberian capital of Monrovia and assess the needs of the region.

He said that some testing is already being done at the labs and that the hospital for infected medical personnel being built by the military should be finished by the end of the month.

Kirby said that the service members are not going to treat patients and are not expected to come in contact with anyone who is infected. But he said the military is training the troops about how to avoid getting Ebola, and also setting plans in place to deal with any service member who might get infected.

"We're going to train them up on what Ebola looks like, feels like, does. While they're there, they're going to be constantly monitored on a regular, frequent basis," Kirby said. "There will be a screening process to make sure that once they're no longer there, that we're able to stay in touch with them, make sure that they haven't ... felt or experienced any symptoms."

He added that troops will also have personal protection equipment if needed and will be trained in how to use it. He said he is unaware of any special staffing or other changes at military hospitals in the United States to prepare them for caring for Ebola patients.

There are about 230 U.S. troops deployed for the Ebola mission now. About two dozen are in Senegal setting up a transportation center and the rest are in Liberia. The Army on Friday said that up to 3,200 soldiers from various units around the country will be going to Liberia, including 1,800 from Fort Campbell, Kentucky, who will arrive late this month.

Others from Fort Hood and Fort