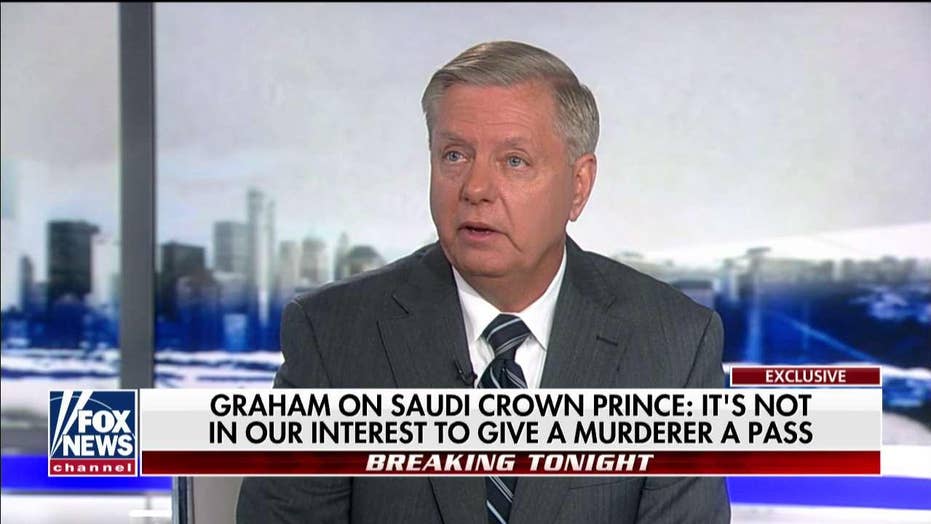 'This Guy's Nuts': Graham Blasts MBS, Says U.S. Can't Give Him 'A Pass' for Khashoggi Murder

The Senate Foreign Relations Committee approved a resolution on Wednesday proposed by Sens. Bob Menendez, D-N.J., and Todd Young, R-Ind., that would suspend weapons sales to Saudi Arabia and impose sanctions on people blocking humanitarian access in Yemen, among other actions following the murder of Washington Post journalist Jamal Khashoggi in Turkey.

Menendez, who was joined at a press conference on Capitol Hill by Sen. Lindsey Graham, R-S.C., and other lawmakers, said the legislation will pass when it comes to a full vote in the Senate and that it is meant to hold Saudi leaders accountable for human rights abuses.

“This sends a global message that just because you’re an ally of the United States, you can’t kill with impunity,” Menendez said.

The announcement of the bipartisan piece of legislation comes just hours after CIA Director Gina Haspel briefed leaders in the House on the Khashoggi killing.

Khashoggi, who had lived in the U.S. and wrote for The Washington Post, had been critical of the Saudi regime. He was killed in what U.S. officials have described as an elaborate plot as he visited a consulate in Istanbul for marriage paperwork that was approved by Saudi crown prince Mohammed bin Salman.

Saudi prosecutors have said a 15-man team sent to Istanbul killed Khashoggi with tranquilizers and then dismembered his body, which has not been found. Those findings came after Saudi authorities spent days denying Khashoggi had been killed in the consulate.

“The relationship with Saudi Arabia is not working for America,” Graham said. “It is more of a burden than an asset.”

Graham added: The crown prince [of Saudi Arabia] is so toxic, so tainted, so flawed.”

The Senate is expected to vote next week on the Yemen resolution, but senators are wrestling with how to limit amendments to prevent a freewheeling floor debate that would allow votes on unrelated issues.

It appears unlikely that the House would be willing to consider either measure. A provision that was part of a House rule that narrowly passed Wednesday would make it harder for lawmakers there to call up a Yemen resolution if the Senate passes it.

Democrats are likely to be more aggressive on Saudi issues when they take the House majority in January. The top Democrat on the House intelligence committee, California Rep. Adam Schiff, said he intends to lead a "deep dive" into Saudi Arabia and Yemen. Democratic Rep. Eliot Engel of New York, the likely incoming chairman of the House Foreign Affairs Committee, said he would hold hearings on Saudi Arabia early next year.

House Democratic leader Nancy Pelosi said the chamber will have a briefing from Secretary of State Mike Pompeo and Defense Secretary Jim Mattis next week on Khashoggi and "we'll know more after that."

Pressed on a response to Saudi Arabia, the president has said the United States "intends to remain a steadfast partner" of the country, touted Saudi arms deals worth billions of dollars to the U.S. and thanked the country for plunging oil prices.

"It could very well be that the crown prince had knowledge of this tragic event," Trump said in a lengthy statement Nov. 20. "Maybe he did, and maybe he didn't!"