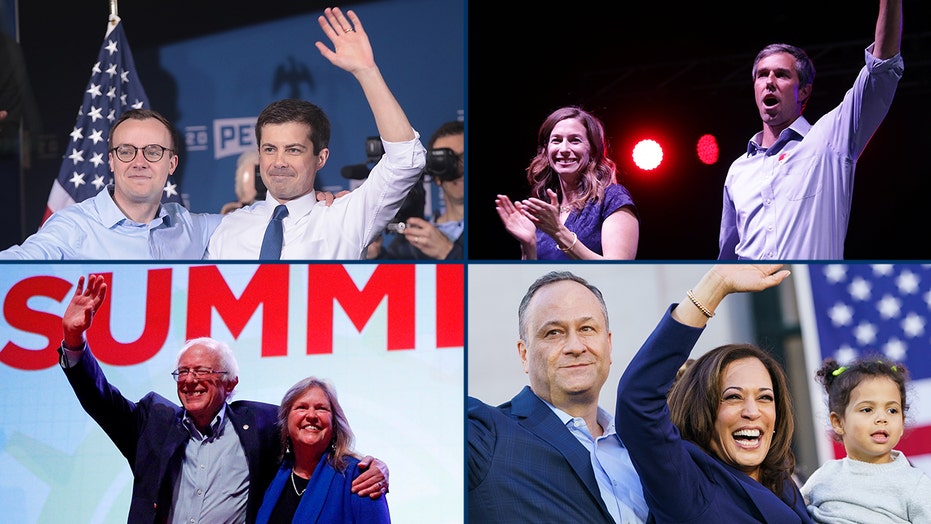 They’re the better, but lesser-known, halves of the 2020 presidential candidates.

But thanks to their time on the campaign trail, as well as cameos in magazine profiles and social media livestreams, the spouses of the nearly two-dozen people running for president are coming into the spotlight.

Here’s a look at the marital running mates who could be the next first lady, or the first-ever first gentleman, of the United States.

Twenty-nine-year-old Chasten Buttigieg is among the most well-known of the 2020 spouses. The teacher who married Pete Buttigieg last year has become a staple on the campaign trail as he travels alongside his husband, South Bend, Indiana Mayor Pete Buttigieg.

Buttigieg – who’s been surging the past month in the race for the Democratic presidential nomination – would become the nation’s first gay president if he makes it to the White House. And Chasten Buttigieg would also make history as the country’s first ‘first gentleman.’

Chasten Buttigieg, who’s on leave from his job as a teacher as he helps his husband’s presidential campaign, has quickly become a star of his own on social media. He’s now up to 276,000 followers on Twitter.

And he’s becoming a regular in campaign emails.

In a fundraising pitch to supporters a few days ago, he described watching his husband declare his candidacy for president, saying “I watched from backstage, in awe of the man I love and the community of people who are standing for a better future for all of us.”

Beto O’Rourke’s wife Amy was thrust in the spotlight the day after the former congressman from Texas launched his presidential campaign last month.

After repeatedly joking on the campaign trail that his wife has been raising their three children "sometimes with my help," O’Rourke faced criticism that the quip spotlighted gender stereotypes.

Beto O’Rourke vowed to be more thoughtful going forward, adding that “my ham-handed attempt to try to highlight the fact that Amy has the lion's share of the burden in our family -- that she actually works but is the primary parent in our family, especially when I served in Congress, especially when I was on the campaign trail -- should have also been a moment for me to acknowledge that that is far too often the case, not just in politics, but just in life in general.”

But even before those headlines, Amy O’Rourke was featured in her husband’s popular Instagram and YouTube videos from his 2018 Senate campaign. And she was a co-star in a widely discussed Vanity Fair article that came out hours before Beto O’Rourke launched his White House bid.

O’Rourke, like her husband, is an El Paso native. She hails from a locally politically influential family. O’Rourke met her husband on a blind date and a year later, in 2005, they married. The couple has three children.

ORourke, 37, worked as a teacher and later served as the superintendent of a K-8 school. She’s currently part of CREED, an educational nonprofit in El Paso.

Like her husband, Sen. Bernie Sanders of Vermont, Jane O'Meara Sanders is a native of Brooklyn.

But she met her second husband in the 1980s, when she was working as a community organizer in Burlington, Vermont and Bernie Sanders was running for mayor of the city.

Sanders, who’s frequently seen at her husband’s side on the presidential campaign trail, has long served as one of his top unofficial advisers, dating back to his first election to the House of Representatives nearly three decades ago.

Sanders was in the headlines in recent years for another reason – her tenure from 2004-2011 as president of Burlington College. The school folded in 2016 due to financial difficulties and she came under investigation. But last year, the U.S. attorney's office in Vermont informed Sanders that they had finished their investigation, and would not bring charges against her.

Two years ago she co-founded the Sanders Institute, a think tank. But with her husband now running for president again, operations at the institute have been suspended for the duration of Sen. Sanders’s White House campaign.

Massachusetts native Bruce Mann is a professor at Harvard Law School and a legal historian.

But the 68-year-old Mann is best known to many outside the world of legal academics as the husband of Sen. Elizabeth Warren.

Mann was a common sight on the campaign trail during the opening weeks of his wife’s presidential campaign, escorting Bailey, the golden retriever he gave Warren as a gift last summer.

He also grabbed attention for his cameo appearance in Warren’s much talked about (and derided) Instagram livestream, when he passed on drinking a beer with his wife in their kitchen.

Mann and Warren married in 1980. The senator has two adult children from a previous marriage.

Sen. Kamala Harris met her husband on a blind date.

Doug Emhoff, the other part of this California power couple, is a partner at the prestigious multinational law firm DLA Piper. He earned $1.5 million last year, according to the couple’s 2018 tax returns. The earnings helped put the couple at the top of the income list among candidates who released their tax returns.

Emhoff has two children from a previous marriage.

Sen. Kirsten Gillibrand and her husband Jonathan Gillibrand walk together after a media availability announcing she will run for president in 2020 outside the Country View Diner, January 16, 2019 in Troy, New York. (Photo by Drew Angerer/Getty Images)

The venture capitalist who’s a British national planned to stay in the U.S. for only a year while studying for his masters in business administration at Columbia University. But he stayed because of his relationship with Gillibrand.

Like his wife, Sen. Amy Klobuchar, John Bessler was raised in Minnesota. Bessler’s an attorney and academic. He’s a professor of law at the University of Baltimore School of Law and an adjunct professor at the Georgetown University Law Center.

The couple, who met in a pool hall and married in 1993, have a daughter named Abigail.

Bessler has written seven books – most of them about capital punishment.

But his wife says he’s also taken on many of the traditional roles of the spouse of a U.S. senator.

Lira Castro, the first person in her family to graduate college, became an elementary school teacher and currently works as an education consultant. She teamed up in 2015 with then-Second Lady Jill Biden to encourage more Hispanic Americans to become teachers.

She married Julian Castro in 2007 and they have a daughter and a son.

Washington Gov. Jay Inslee (left) and his wife Trudi Inslee as he announces his run for the 2020 Presidency at A &amp; R Solar on March 1, 2019 in Seattle, Washington. (Photo by Karen Ducey/Getty Images)

Like her husband Gov. Jay Inslee, Trudi Inslee is a native of Washington State.

The two met at Seattle’s Ingraham High School and were married a few years later, in 1972. They have three sons.

Trudi Inslee’s an avid golfer, a passion that was passed along by her father, who was a public golf course pro and former University of Washington golf coach.

Pringle, who’s a quarter century younger that Hickenlooper, tied the knot with the then-Colorado governor in 2016.

Rep. Tulsi Gabbard’s husband, Abraham Williams, is commonly seen on the campaign trail, with his camera capturing almost every move of his wife his wife’s bid for the White House.

Williams, a cinematographer, and Gabbard were already friends in 2012 when he volunteered to help shoot Gabbard’s campaign ads when she was running for the U.S. Congress for the first time.

The two, who share a passion for surfing, started dating a year later. They married in 2015. It was the second marriage for Gabbard, who’s seven years Williams’ senior.

Like her husband Rep. Tim Ryan, Andrea Zetts is a native of northeastern Ohio.

Zetts, an elementary school teacher, met Ryan in 2008. The two, who were both previously married, tied the knot in 2013.

They have two children from her first marriage and added a baby boy in 2014.

Rep. Eric Swalwell met his wife Brittany Watts in 2015 and they married a year later. It was the congressman’s second marriage.

They have a son and a daughter together.

Watts is a sales director at the Ritz-Carlton in Half Moon Bay.

Former Rep. John Delaney of Maryland’s wife, April McClain-Delaney, is a communications lawyer and an entrepreneur, who’s focused for some 25 years on the regulation of communications satellites as well as safeguarding the digital privacy of children.

While John Delaney grew up in a union household in New Jersey, April McClain was born and raised in Idaho, where her father was a russet potato farmer.

The two met at Georgetown University Law Center and married in 1990. They have four children together.

They live in New York City.

The most famous among the spouses of 2020 candidates, Melania Trump has carved out her own agenda in the White House, launching an anti-bullying initiative and traveling solo last year to Africa.

The Slovenia-born fashion model became a permanent resident of the United States in 2001. She married Donald Trump in 2005 and became a naturalized American citizen a year later.

She is the second foreign-born first lady in the country’s history, following Louisa Adams, who was the wife of President John Quincy Adams.

Melania and Donald Trump have one son together, Barron.

Former Massachusetts Gov. Bill Weld, who to date is the only Republican primary-challenging President Trump, married Leslie Marshall in 2003. It was the second marriage for both.

Leslie Marshall has two children from her first marriage with Dominic Bradlee, the son of Washington Post editor Ben Bradlee.  She was a reporter for the Washington Post and is a magazine editor and novelist.