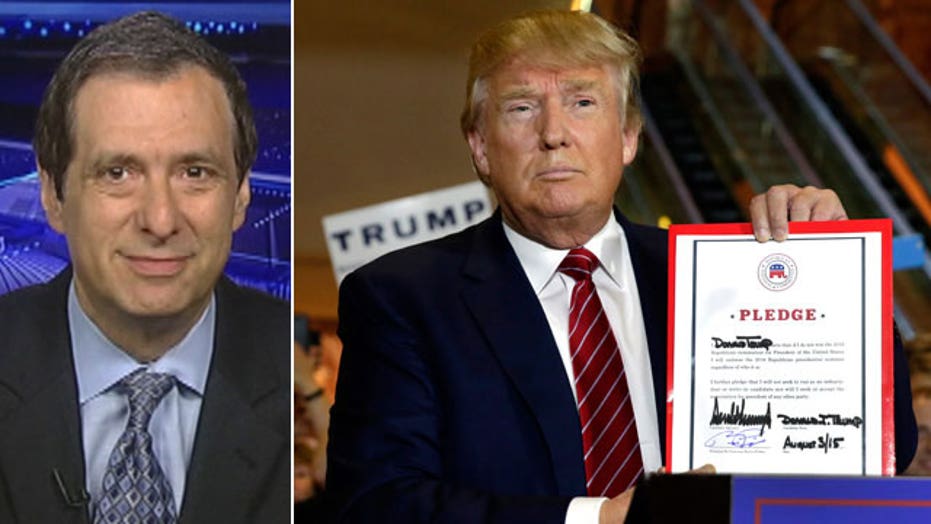 Kurtz: How Trump got from no to yes

Of course Donald Trump didn’t just take the pledge. He turned it into a television show.

It seemed obvious to me that Trump was moving in the direction of promising not to mount a third-party bid—precisely what he declined to do when Bret Baier asked the opening debate question that he found so unfair. I guess it was also kinda important to the Republican Party.

Why, after all, would Trump fight ballot battles in 50 states when he’s the clear front-runner of a party that’s automatically on every ballot? The man is at 30 percent in the new Monmouth poll, Ben Carson’s at 18, and every other candidate is in single digits.

But what a spectacle yesterday at Trump Tower, the glittering lobby packed with journalists and camera crews, the cable networks all live, and The Donald holding forth not just about being loyal to the GOP but every other topic that reporters threw at him.

Such as Tom Brady just having gotten his NFL suspension overturned: A very good friend, Trump had just talked to him, terrible the way he’s been treated.

Such as Kanye West saying he’ll run for president in 2020 (with the disclaimer that he’d been smoking weed): Trump will never say anything bad about him because Kanye’s been complimentary toward him—unless of course they actually run against each other.

I would submit there’s never been a presidential candidate like this—and yes, both fans and foes can read that statement any way they want.

The loyalty pledge provides a nice coda to a marked shift in Trump’s coverage. He’s been complaining less about the media in recent weeks, and for good reason.

Gone are the stories about a summer fling, a sideshow, an inevitable meltdown. The press now knows that Trump is in it for the long haul. And I’ll go one step further.

Much of the media now recognizes what previously seemed a far-off fantasy: that Donald J. Trump could be the Republican presidential nominee. And that means he has at least a shot at winning the White House.

Even the liberal New Republic says so:

“Trump does not appear to be an extinguishable threat, the way Perry, Cain, and Gingrich were. Trump might have hit his ceiling, but there’s nothing in the offing right now that promises to drag him back down. If Ben Carson surges, that’s not going to be at Trump’s expense. It will be at the expense of the rest of the field…

“Short of sabotaging Trump by changing the rules in the middle of the race, which would risk driving him to mount an independent candidacy, the race itself will have to take on a completely new character for Trump to lose steam. Otherwise, he will win.”

That piece, written before Trump took the pledge, may become the new conventional wisdom.

And here’s an eye-opener: Some liberals say a Trump administration may not be so terrible.

The left-wing site Salon begins a piece by decrying Trump’s “outrageous and downright offensive remarks,” not to mention his “virulent xenophobia and nationalism.”

“When it comes to economic issues, Trump is also very different than his GOP competitors, and is more or less running against the GOP orthodoxy when it comes to taxes. Last week he almost sounded like a progressive when talking about the tax code…Beyond these issues, Trump has opposed cuts to Social Security, Medicare, and Medicaid.”

And then the backhanded compliment:

“The fact that Trump is the most progressive of GOP candidates, at least when it comes to certain policies, simply shows how very backwards the GOP actually is.”

But it’s true. Trump isn’t running as a movement conservative, and his fans don’t seem much bothered by his deviations from orthodoxy.

What about the man the media all thought would be the front-runner? Conservatives aren’t happy with him either.

“Jeb Bush was a good governor in a different era,” says National Review. “In this era, he is a good man with his heart in the right place even when his head isn’t, an unquestionably decent gentleman and an ornament to the Republican party with no obvious reason to be its presidential nominee, much less president of these United States.”

So in the media’s eyes, Trump has gone from unthinkable to…unavoidable. But not yet inevitable.