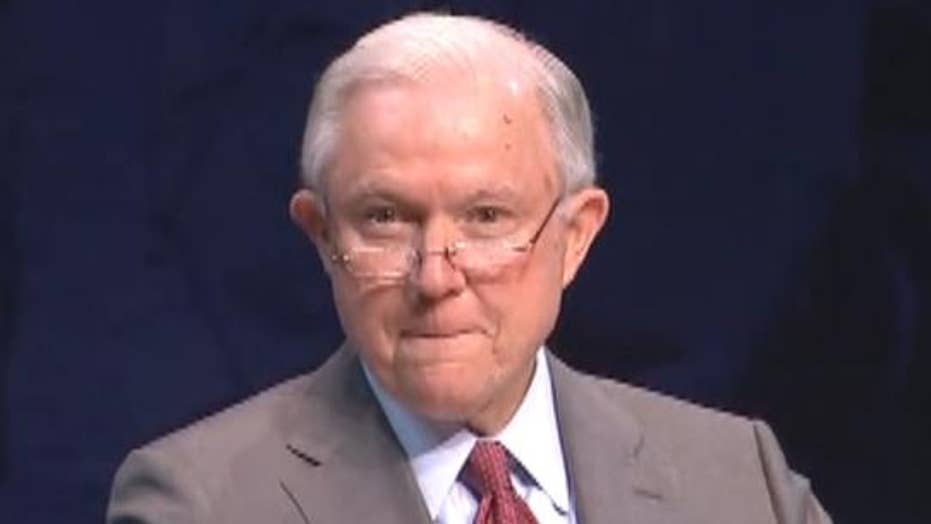 Attorney General Jeff Sessions is under fire for briefly repeating “lock her up” during the Turning Point USA High School Summit on Tuesday as the crowd chanted the anti-Hillary Clinton rallying cry. But some media watchdogs feel Sessions is being wrongly accused by reporters of joining the chant.

When Sessions took the stage, the crowd chanted the phrase and he appeared to awkwardly utter it as well, laugh it off and move on. However, CNN broke into programming with a “just in” chyron focusing on Sessions repeating the expression and various news organizations covered it as if he'd started the mantra himself.

Daily Wire reporter Ryan Saavedra told Fox News that the mainstream media “intentionally misled the American people” by dishonestly painting Sessions as participating in the chant. Saavedra pointed to CNN, which played the clip without including the next words uttered by Sessions, which were, “I heard that a long time over the last campaign.”

Other news organizations were more accurate, such as Vox, which headlined the story, “Jeff Sessions laughs at ‘lock her up’ chants, briefly repeats the line.”

While pundits across the political spectrum condemned Sessions for not telling the high schoolers to knock it off, he didn’t lead the derogatory chant or egg on the crowd.

“This deceptive take by the media closely mirrors Trump’s ‘animal’ comment where they did not show the full context of what was being said and used a selectively edited clip to make an attack,” Saavedra said.

Free Beacon reporter Alex Griswold quickly noticed the disparity, tweeting: “I don't like how this is being described. Hearing a chant, laughing and saying it once, and moving on is not ‘chanting,’ ‘joining a chant,’ and it sure as hell isn't ‘join[ing] the call to imprison... Hillary Clinton.’"

NewsBusters Managing Editor Curtis Houck told Fox News that it is “another basic example of how many on the left have lost their minds and seize upon every perceived allegation, joke, or even slight against someone” on their side of the aisle.

“He was clearly acknowledging what the high school students were chanting and chuckled before moving on."

“He was clearly acknowledging what the high school students were chanting and chuckled before moving on. He didn't raise his fists and chant along with them or tell the audience that the Justice Department will make sure Hillary Clinton is locked up. The fact that he didn't do those things yet the media are going gangbusters over this story shows how they should stop a few times a day and just breathe,” Houck said.

Mediaite columnist Joseph Wulfsohn told Fox News that it “seemed more like a reaction to the chant than him actually joining in on it,” and lthat iberal media members should be resting easy with the knowledge that Sessions hasn’t actually attempted to lock her up.

“He’s been the attorney general for a year and a half and he still hasn’t indicted Hillary Clinton or anyone in her inner circle. Once again, their overreaction outweighs the latest error from this administration,” Wulfsohn said.

Sessions’ speech included a blistering attack on campus culture, which went largely uncovered by the mainstream media that focused on his reaction to the chant.

“Rather than molding a generation of mature, well-informed adults, some schools are doing everything they can to create a generation of sanctimonious, sensitive, supercilious snowflakes,” Sessions said. Too many schools are coddling students. … There was a ‘cry-in’ at Cornell after the 2016 election, therapy dogs at the University of Kansas. … I hope they had plenty of tissues.”

He added that instead of fostering open debate on campus, school administrations are bowing to liberal ideologies and “coddling students” with trigger warnings, crying rooms and therapy sessions.

Sessions called out a number of schools – including Middlebury College in Vermont and the University of California, Berkeley – that he says have actively tried to silence conservative speakers.