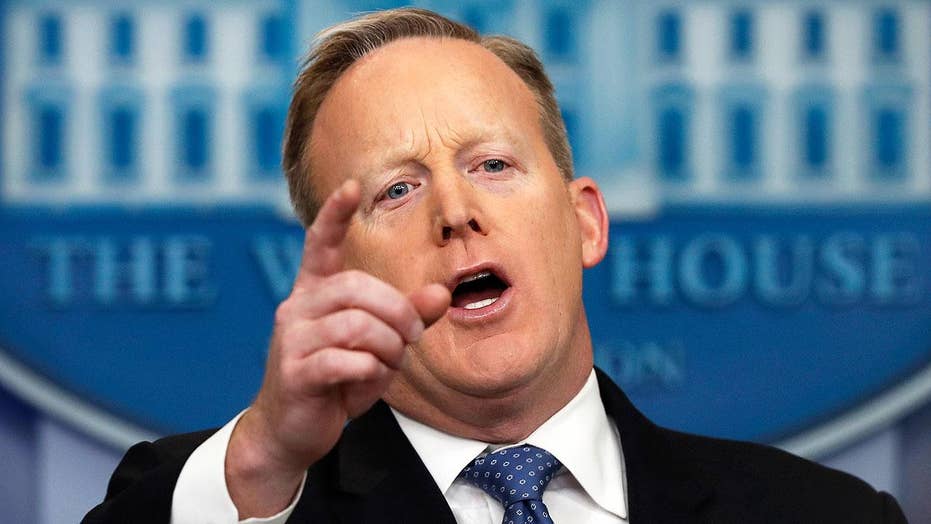 President Trump's war with the press intensified Friday when several journalists perceived as critical of the administration charged they were barred from a press briefing with White House spokesman Sean Spicer and lodged a complaint.

Those claiming they were barred included The New York Times, The Los Angeles Times, CNN and Politico. Fox News, which was not kept from covering the event, nonetheless joined a complaint by the chair of the five-network television pool.

The action, which came after Trump delivered a rousing speech to a friendly crowd at the Conservative Poitical Action Conference, also drew a rebuke from the White House Correspondents’ Association.

“The WHCA board is protesting strongly against how today's gaggle is being handled by the White House,” Jeff Mason, WHCA president said in a statement. “We encourage the organizations that were allowed in to share the material with others in the press corps who were not.”

The move marked an escalation in the tumultuous relationship between the White House and some members of the media, although the White House denied it went out of its way to bar specific outlets. A spokeswoman said the event was a "pool" event, which by definition is limited.

“We invited the pool so everyone was represented,” White House spokeswoman Sarah Sanders said. “We decided to add a couple of additional people beyond the pool. Nothing more than that.”

Friday’s briefing was indeed initially deemed a pool event. A press pool is a 13-member group that includes reporters who represent the five major networks, print organizations and the wire services. The pool’s duty is to attend the event and then distribute the information to other media outlets.

Once the pool was expanded, yet certain media outlets excluded, press representatives argued the effect was the same as a selective ban.

“Nothing like this has ever happened at the White House in our long history of covering multiple administrations of different parties,” Dean Baquet, the Times' executive editor, said in a statement. “We strongly protest the exclusion of The New York Times and the other news organizations. Free media access to a transparent government is obviously of crucial national interest."

CNN also weighed in, calling it “an unacceptable development by the Trump White House.”

“Apparently this is how they retaliate when you report facts they don’t like,” the broadcasting organization said in a statement. “We’ll keep reporting regardless.”

The Associated Press chose not to participate in the White House media gaggle.

“The AP believes the public should have as much access to the president as possible,” Lauren Easton, AP’s director of media relations said in a statement.

The news organizations that were allowed to attend included Breitbart News, whose former chief exective, Steve Bannon, is Trump’s chief strategist. Bannon has repeatedly described the press as "the opposition party."

At the CPAC speech, Trump railed against the media for relying on anonymous sources for stories that cast his month-old administration in a negative light.

He went so far as to say reporters “shouldn’t be allowed to use sources unless they use somebody’s name,” though some of his own administration officials recently held briefings with news media where they insisted no names be used.