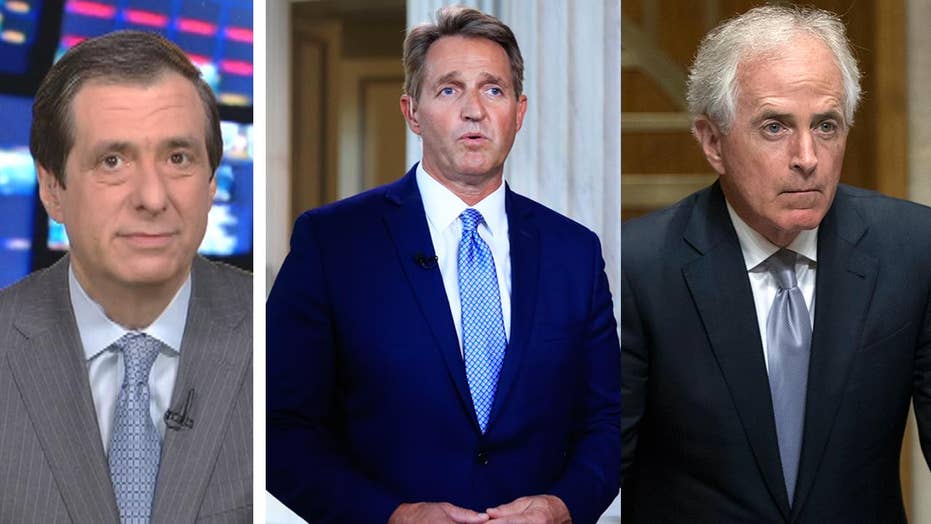 'MediaBuzz' host Howard Kurtz weighs in on the question that if Jeff Flake and Bob Corker are so appalled by Trump's conduct in office, why are they quitting?

The media are treating Jeff Flake and Bob Corker as truth-telling heroes, and the reason isn’t hard to figure out.

Their stinging criticism of Donald Trump matches what many journalists and pundits have said publicly or, in some instances, privately. In fact, the indictment delivered by two Republican senators gives them cover to shine a spotlight on this harsh assessment without appearing partisan. These are, after all, members of the president’s own party.

But other questions were surfacing yesterday as the dust settled. Namely, if Flake and Corker are so appalled by Trump’s conduct in office, why are they quitting?

It is the very act of saying they won’t run again that has liberated them to rip the president in such personal terms. But that same act means they are instant lame ducks with dwindling political power, and won’t be around after 2018.

This is, interestingly enough, a critique that’s gaining traction on the left as well as the right.

Flake has a ready answer, which is that he couldn’t win the GOP nomination back in Arizona without catering to Trump and Trump voters. Corker has just said he wanted to be done after representing Tennessee for two terms.

The flip side of their pending retirements is that the Steve Bannon wing of the Republican Party is happy they’re bailing out. Bannon is leading a drive to replace Trump critics in Congress with populist candidates who will be more supportive of the president—if, that is, he can help get them elected.

On the conservative side, New York Times columnist Ross Douthat—not a Trump fan—portrays the two senators as, well, passive-aggressive:

"There is a small but significant Republican opposition to Trump, but its leading figures still don’t want to go to war with him directly, preferring philosophical attacks and tactical withdrawal to confrontation and probable defeat ...

"And now Jeff Flake of Arizona has delivered a barnburner of a Senate address about the civic costs of the Trump presidency — while simultaneously declaring that because he can’t win his primary in a Trumpified party, he won’t even stay and fight it out ...

"And an anti-Trump movement that gives high-minded speeches but never mounts candidates confirms Trump’s claim to face establishment opposition while also confirming his judgment of the establishment’s guts and stamina — proving that they’re all low-energy, all 'liddle' men, all unwilling to fight him man to man."

So Douthat is basically calling them wimps for limping out of the arena.

On the liberal side, Daily Beast columnist Michael Tomasky, a frequent "Media Buzz" guest, hails Flake as a man of principle--but voices the same complaint:

"I salute him. And other Republicans (especially you, Paul Ryan) should look in the mirror with shame Wednesday morning.

"They liked it because he said I’m quitting. To them, he's another scalp for them to nail to the wall of their train as it steams toward the destruction of the republican norms of which Flake spoke. He’s the second scalp they’ve claimed in the last month," after Corker hanging it up, "unable to function in a way that will permit him to look himself in the mirror in this Trumpian surreality."

So again, the two senators are seen as all talk, no action.

It seems unlikely that many Republicans will join this emerging Anti-Donald Caucus because most of them want to hang onto their jobs. So while Flake and Corker can feel good about their press clippings, they are also stuck with the less flattering narrative that Trump has driven them out of the Senate.