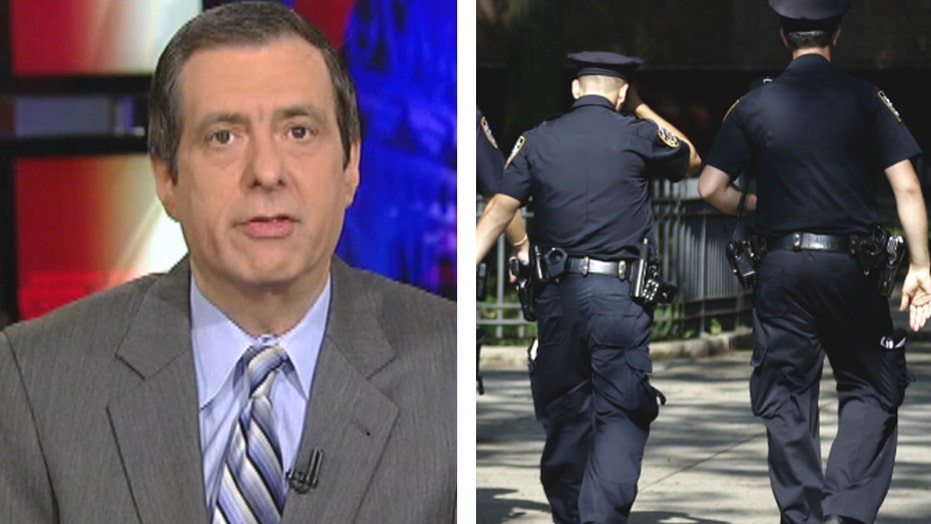 The cold-blooded murder of two police officers in Brooklyn over the weekend is unspeakably sad.

What’s also sad is the way that some in the media and political arena are trying to blame certain politicians for the act of a mentally ill man who also shot his girlfriend and later killed himself.

This blame game, using a tragedy to score political points, has got to stop. Unfortunately, both sides have a history of this kind of exploitation.

The person to blame for gunning down those officers is Ismaaiyl Brinsley, a black ex-convict with 19 arrests who once tried to hang himself. And yes, he seized upon the deaths of Michael Brown and Eric Garner, based on his Instagram post. But he was also violent and crazy.

Let’s flash back to Jan. 8, 2011, the day that another crazed gunman shot nearly 20 people in Tucson, and wounded Gabby Giffords. That very day, I wrote a column about the blame game, saying that Sarah Palin was “one of the first to be dragged into this sickening ritual of guilt by association.” The former Alaska governor posted a map on her Facebook page with crosshair targets representing 20 Democratic lawmakers she was singling out for defeat, including Giffords, and she tweeted, "Don't retreat, RELOAD!"

That rhetoric was unfortunate, I said, but “this isn't about a nearly year-old Sarah Palin map; it's about a lone nutjob who doesn't value human life.”

But some liberals tried to link her to the Jared Loughner shooting. “If Sarah Palin, whose website put and today scrubbed bullseye targets on 20 representatives including Gabby Giffords, does not repudiate her own part in amplifying violence and violent imagery in politics,” said Keith Olbermann, then with MSNBC, “she must be dismissed from politics.”

Such finger-pointing was wrong then, and it’s wrong now.

After the 1995 Oklahoma City bombing, Bill Clinton assailed “the purveyors of hatred and division” for “reckless speech” and conveying the impression “that violence is acceptable.” Rush Limbaugh responded that “liberals intend to use this tragedy for their own political gain.”

Such finger-pointing was wrong then, and it’s wrong now.

This time, some conservatives are trying to blame those who have been critical of the police.

“We’ve had four months of propaganda starting with the president that everybody should hate the police,” Rudy Giuliani said on “Fox News Sunday.”

I fail to see where Barack Obama has suggested that people should hate the police. He has talked about how young black men distrust the police, and whether local police forces are overly militarized — and those who think he’s wrong should criticize him as strongly as they want.

But here’s what the president said right after the Ferguson non-indictment:

“There are Americans who agree with it, and there are Americans who are deeply disappointed, even angry.  It’s an understandable reaction.  But I join Michael’s parents in asking anyone who protests this decision to do so peacefully.” While urging the Ferguson police to exercise restraint, Obama said: “Understand, our police officers put their lives on the line for us every single day.  They’ve got a tough job to do to maintain public safety and hold accountable those who break the law.”

De Blasio, who campaigned against the stop-and-frisk tactics of the Bloomberg administration, is fiercely resented by some on the NYPD. Some were upset, after the lack of charges in Eric Garner’s choking death on Staten Island, that the mayor spoke of telling his biracial teenage son to “take special care” in any encounter with police officers “who are there to protect him.” (DeBlasio was quite conciliatory in a presser Monday.) But these divisions don’t mean, as Rudy says, that he should be blamed for the deaths.

Former Rep. Joe Walsh slammed the attorney general on Twitter: “Reading Eric Holder's statement makes me want to vomit. It's because of hypocrites like Holder that 2 cops are dead!!”

I’m one of the leading critics of Al Sharpton, who I’ve covered on and off since the Tawana Brawley disgrace. It remains hard for me to believe that MSNBC allows him to plunge into these racially charged controversies — such as the deaths of Trayvon Martin and Michael Brown — and then cover them, and cover himself, on his show. Reverend Al makes his living by stirring things up.

But I don’t think it’s fair to blame the killing of these Brooklyn officers on Sharpton, who immediately denounced the shooting as a senseless act of violence. To be sure, Sharpton should have spoken out against protestors who chanted about dead cops. But now, although he appeared with Eric Garner’s widow to call for an end to violence, Sharpton is getting death threats.

Oh, and then there’s my profession. My show got an email from a woman in New York saying: “The Liberal Media helped to pull the trigger on those police officers that were assassinated on Saturday.”

The overwhelming majority of police officers are brave individuals who do a great and thankless job. With our collective focus on the incidents where something goes wrong, when a civilian is killed, we don’t spend enough time recognizing that. But there’s a long distance between that and the blood-on-our-hands argument.

There were some in the media and politics who clung too long to the original Ferguson narrative, even when evidence emerged that Brown had attacked Darren Wilson in his police car. Whether you believe an indictment was warranted or not, those who kept pushing the “hands up” scenario, not to mention those who rioted, didn’t help the atmosphere.

Rafael Ramos and Wenjian Liu are dead, leaving behind grieving families. We should celebrate their lives by making the story about them, rather than trying to tar others with their deaths.