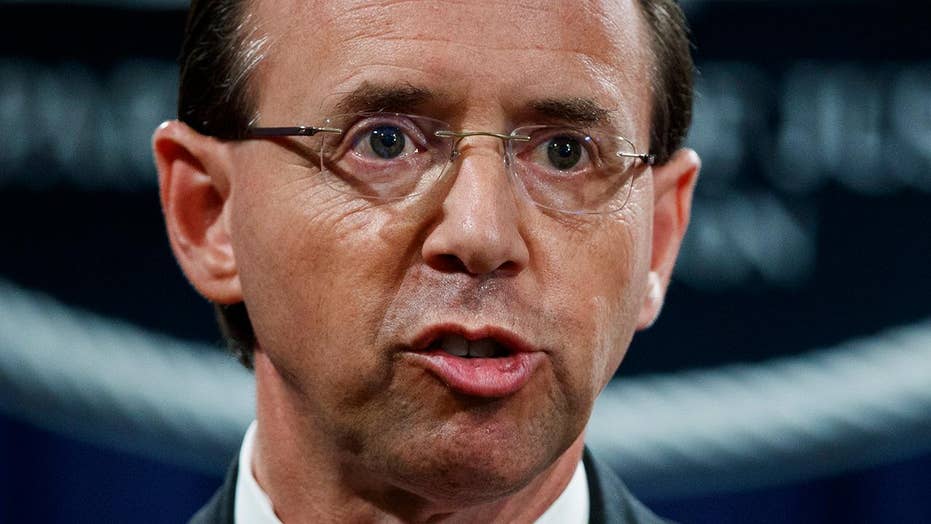 New calls for Rod Rosenstein to appear before Congress

The chairman of the House Freedom Caucus is calling on Deputy Attorney General Rod Rosenstein to appear before Congress this week to testify about reports claiming he suggested wearing a "wire" to record President Trump and broached invoking the 25th Amendment to remove the president from office.

It comes amid an uncertain future for Rosenstein, who has disputed the accuracy of those reports and is scheduled to meet with President Trump on Thursday amid rumors of his exit from the Justice Department.

“You can't have the number two official at the Department of Justice making comments about wiring the President and not address it,” Rep. Mark Meadows, R-N.C., tweeted Tuesday. “Rod Rosenstein must come before Congress this week, under oath, and tell the truth about his alleged statements.”

A Justice Department spokesman told Fox News Rosenstein had not received an invitation from any committee to testify.

ROSENSTEIN TO MEET WITH TRUMP IN WAKE OF 'WIRE' REPORT

Rosenstein, 53, has been targeted by Republicans for months and frequently finds himself in the political crosshairs due to his role overseeing the special counsel's Russia probe. In July, Meadows and Jim Jordan of Ohio, another member of the conservative House Freedom Caucus, introduced five articles of impeachment against Rosenstein.

Rosenstein was the subject of numerous conflicting reports late Monday morning. One initial report indicated the embattled official had already quit, while sources told Fox News and other outlets that he was heading to the White House expecting to be fired. But the White House put out a brief statement saying Rosenstein and Trump will meet Thursday, apparently to continue discussing that story, when the president returns from New York.

“At the request of Deputy Attorney General Rod Rosenstein, he and President Trump had an extended conversation to discuss the recent news stories,” White House Press Secretary Sarah Sanders said in a statement. “Because the President is at the United Nations General Assembly and has a full schedule with leaders from around the world, they will meet on Thursday when the President returns to Washington, D.C.”

The New York Times report said Rosenstein had discussed wearing a "wire" to tape Trump and pursuing his removal from office in meetings and conversations with Justice Department and FBI officials. This would have been in the tumultuous days after James Comey was fired as FBI director, with the president citing in part a memo penned by Rosenstein -- reportedly catching him off guard.

Special Counsel Robert Mueller was appointed as special counsel the next day.

According to the Times, none of Rosenstein’s proposals were acted upon and it remains unclear the level of seriousness Rosenstein had when making the suggestions.

Before named by Trump to serve as the No. 2 to Attorney General Jeff Sessions, Rosenstein served as the U.S. Attorney for the District of Maryland. Rosenstein took over the Russia probe after Sessions recused himself last year.