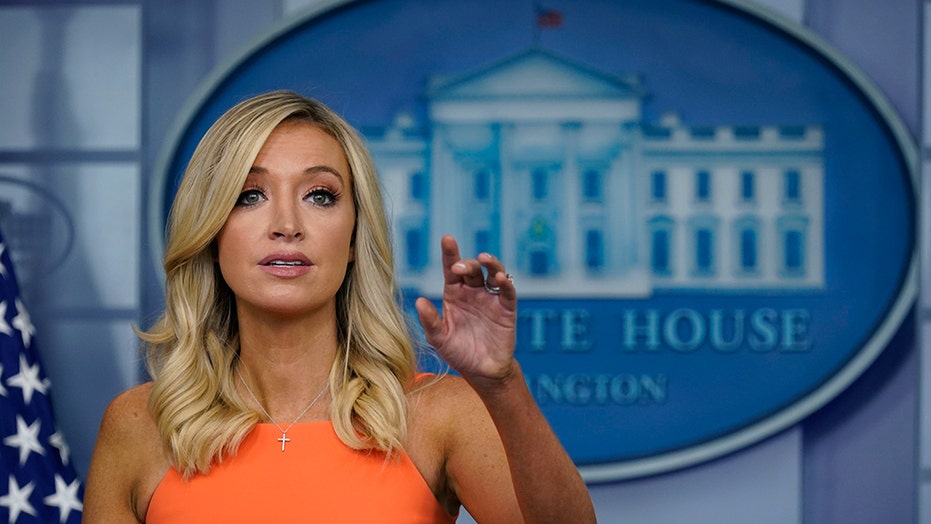 White House press secretary Kayleigh McEnany said President Trump will accept the results of a “free and fair election” after being pressed on his comments about a peaceful transfer of power from earlier this week.

"I think that your question is more fitting to be asked of Democrats who have already been on the record saying they won't accept the results of an election," the press secretary continued.

On Wednesday a reporter asked the president,  “Win, lose or draw in this election, will you commit here today for a peaceful transferal of power after the election?”

The reporter, Brian Karem of Playboy, pressed the president, noting the riots that have popped up in some American cities over the summer.

In July, Trump told Fox News’ Chris Wallace he wouldn’t commit to accepting the results of the 2020 election prematurely.

Questioned about Trump’s comments, Democratic nominee Joe Biden rhetorically asked “What country are we in? He says the most irrational things.”

Republican Sen. Mitt Romney, of Utah, also criticized the president’s words, writing in a tweet, “Fundamental to democracy is the peaceful transition of power; without that, there is Belarus. Any suggestion that a president might not respect this Constitutional guarantee is both unthinkable and unacceptable.”

When asked if Trump would accept a peaceful transfer of power, House Speaker Pelosi, D-Calif., told reporters, “It’s really sad you even have to ask that question.”

“We know who he admires. [Vladimir] Putin. Kim Jong-un. [Recep Tayyip] Erdogan,” she continued. “You are not in Russia. He is not in North Korea. He is not in Turkey.

“He’s trying to have the Constitution of the United States swallow Clorox,” Pelosi said.

Senate Minority Leader Chuck Schumer, D-N.Y., in response to the president's remarks said on the Senate floor Thursday morning that the biggest threat to American democracy does not come from abroad, but from the White House.

“Get rid of voting, get rid of the ballots, just let him stay in power for whatever illicit way he chooses to do so. That’s what he’s saying," Schumer claimed.

"Now everyone, from schoolchildren to the most senior among us know that the peaceful transfer of power is one of democracy’s core attributes," he continued. "There is no democracy without it."

“President Trump you are not a dictator and America will not permit you to be one," Schumer said, adding that "the votes will be counted" and "the results of the election must be accepted."

Sen. Majority Leader Mitch McConnell assured the public that the election and inauguration processes will take place the same way they always have.

"The winner of the November 3rd election will be inaugurated on January 20th," McConnell tweeted. "There will be an orderly transition just as there has been every four years since 1792."