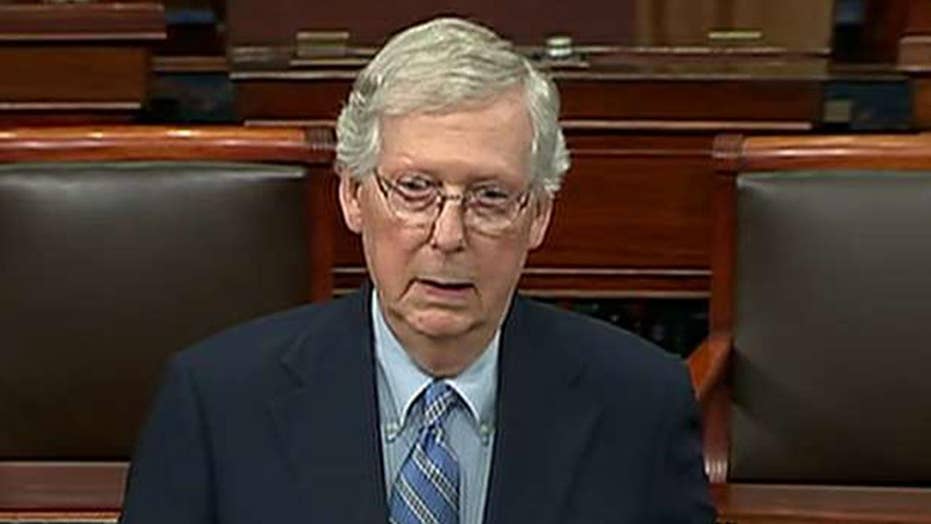 Speaking on the Senate floor, Mitch McConnell vows not to be intimidated by liars and bullies.

In unusually forceful, angry, and personal terms, Senate Majority Leader Mitch McConnell on Monday countered what he called "baseless smears" from left-wing media and vowed not to be "intimidated," in the wake of a Washington Post op-ed that declared McConnell a "Russian asset."

That op-ed was written by columnist Dana Milbank, whom McConnell bluntly suggested was one of several "hyperventilating hacks" who conveniently had ignored former President Obama's "feckless" Russia policies.

Milbank had argued that McConnell's opposition to several election-security bills proposed by Democrats effectively made him an unwitting Russian agent, and other pundits quickly echoed Milbank's argument. On MSNBC's "Morning Joe" on Friday, host Joe Scarborough repeatedly called McConnell "Moscow Mitch," saying he was "aiding and abetting" Russian President Vladimir Putin's efforts to "subvert" American elections -- and even alleging a Russia-linked investment in Kentucky could be playing a part.

"I don't normally take the time to respond to critics in the media when they have no clue what they're talking about," McConnell said. "But, this modern-day McCarthyism is toxic, and damaging, because of the way it warps our entire public discourse. 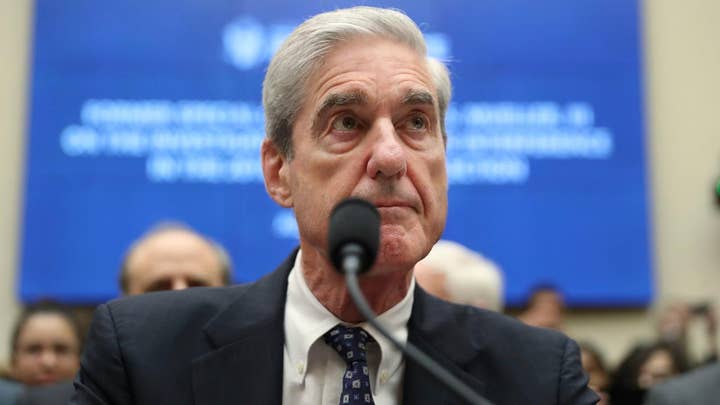 "Facts matter," McConnell said sternly. "Details matter. History matters, and if our nation is losing our ability to debate public policy without screaming about treason, that really matters. In the middle of the 20th century, the original McCarthyism hurt America's strength and diminished our standing in the Cold War by dividing us against ourselves."

MSNBC PANIC: ANALYST SAYS THIS COULD BE THE LAST FREE AND FAIR ELECTION IN AMERICAN HISTORY

In response, Fred Hiatt, editorial page editor at The Washington Post, told Fox News: “Dana Milbank’s column was a legitimate exercise in commentary, making the argument that Sen. McConnell’s blocking of elections-security legislation will harm the United States and work to Russia’s advantage. Of course it’s equally legitimate for Mr. McConnell to express a contrary view, but the Milbank argument has nothing to do with McCarthyism.”

McConnell, however, said the "outrage-industrial complex" had ignored his legitimate and principled objections to Democrats' proposed election-security bills. For example, McConnell noted that the New York Times editorial board this weekend wrote that he "has long opposed federal involvement in election management" and as far back as 2002, "repeatedly spoke out against a one-size-fits-all approach in favor of leaving election matters up to the states."

One of the Democrats' proposals would have federally mandated the use of paper ballots as well as voting machines that do not directly connect to the Internet, and included funding for the federal Election Assistance Commission.

The bill passed the House 225-184, with only one Republican vote, and McConnell then killed Democrats' bid to pass it in the Senate via unanimous consent. On Monday, McConnell chastised Democrats for the "partisan" maneuver, saying they knew the bill never had a chance of passing by unanimous consent, which can be blocked by a single senator.

Republicans have also said Democrats are playing politics by seeking election-security funding that has already been allocated for that purpose. Last year, Republicans allocated $380 million to the states for election security in a funding bill, although the move attracted little attention. States still have available grant money to spend from that allocation.

First Amendment concerns have also been raised about another bill proposed by Democrats, which would require campaigns to disclose all contacts with foreign individuals to the FBI. That, too, would be an unprecedented federal overreach into state-level elections, McConnell said.

Still, he made clear he didn't think Democrats actually cared about his reasoning.

"This modern-day McCarthyism was pushed by big-time outlets," McConnell said. "The smear that I am 'a Russian asset' ran in the opinion pages of the Washington Post. The accusation that I am 'un-American' was broadcast on MSNBC. This is the state of left-wing politics in 2019."

He added: "These people have worn out the volume knobs so badly that they have nothing left but the most unhinged smears," McConnell said. "Welcome to modern-day McCarthyism. McCarthy-like tactics out in the open for everyone to see."

Speaking after McConnell, Senate Minority Leader Chuck Schumer, D-N.Y., indicated he was perplexed by Republicans' opposition to the bills.

"I still don't have a really good idea why Leader McConnell won't do something on election security," Schumer said. He added that it would be a "mistake to elevate" a "partisan warrior" to be the director of national intelligence (DNI), in a jab at Texas Rep. John Ratcliffe, whom Trump named to replace outgoing DNI Dan Coats.

Schumer said if administration officials give the president information he doesn’t want to hear, "you’re either fired, or you’re frozen out and you quit."

But, McConnell, who entered the Senate in 1985, said he has distinguished himself as staunchly loyal to the United States and deeply skeptical of the Soviet Union and, later, Russia.

"I'm proud of my record, I'm proud that it's right there in black and white, and liars cannot gaslight it away,"  McConnell said.

The majority leader noted that in the 1980s he stood with then-President Ronald Reagan on missile defense and his Soviet policy. He also said he was "honored" to "watch Communism crumble," before later "sounding the alarm" when then-President Bill Clinton was "too soft on Russia."

"I used hearings to grill Democratic officials who were soft on President [Boris] Yeltsin and optimistic about President-elect Putin," McConnell said, noting that many Democrats were less skeptical about Putin.

"In 2010, I stood with [Arizona GOP Sens.] John McCain and John Kyl to oppose the new START treaty, a watered-down placeholder for the sort of tough stance we knew was necessary," McConnell added, after mentioning Putin's aggression in Crimea under Obama. "As Vladimir Putin was building up his nuclear arsenal, we even had to push President Obama to commit to deploying capable missile defenses to Europe."

"In 2012, I firmly supported sweeping legislation to authorize heavy sanctions following the killing of Sergei Magnitsky in a Russian prison. The Obama administration flinched and tried to tiptoe around our legislation to avoid messing up their charm offensive, but we backed them into a corner and the president signed the bill into law."

McConnell concluded: "Let me make this crystal clear for the hyperventilating hacks who haven’t actually followed this issue. Every single member of the Senate agrees that Russia meddling was real and is real. We all agree that the federal government, state government and the private sector all have obligations to take this threat seriously and bolster our defenses. Claims to the contrary-- that anybody here denies what Russians did on President Obama’s watch -- are just lies, not partisan distortion, not clever spin, just total fabrications."

However, the committee said a major purpose of Russia's involvement may have been to cause hysteria and affect America's confidence in democracy. In fact, the panel said, Russia may have wanted their activities to be discovered.

"While the Committee does not know with confidence what Moscow's intentions were, Russia may have been probing vulnerabilities in voting systems to exploit later," the report stated. "Alternatively, Moscow may have sought to undermine confidence in the 2016 U.S. elections simply through the discovery of their activity."