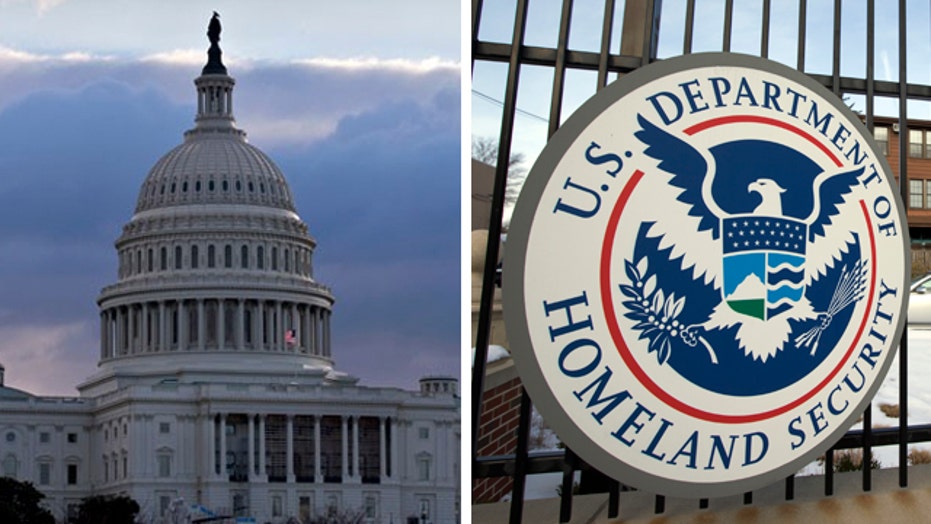 Senate Democrats, meanwhile, voiced support for the new plan after initially staying coy. A day earlier, McConnell, R-Ky., effectively gave them what they wanted – by agreeing to hold a stand-alone vote on a DHS funding bill, with no immigration measures attached.

“We are going to do everything we can to make sure it passes by an overwhelming vote. I think virtually every Democrat will vote for that,” Senate Minority Leader Harry Reid, D-Nev., announced Wednesday.

Reid’s announcement helps clear the way for passage in the Senate.

Indeed, shortly after his comments, the Senate voted 98-2 to advance the legislation that Democrats had blocked four times in a row. That legislation would reverse Obama’s immigration actions as a condition for funding DHS. But Democrats supported it Wednesday with the understanding it will be changed to what Democrats want.

McConnell also earned support from senior members of his caucus, with fellow GOP leaders making clear that the approach may be the only way to fund DHS past a Friday midnight deadline.

But vocal conservatives bristled at the change in tactics. And the complaints could create serious turbulence on the House side.

Rep. Mo Brooks, R-Ala., one of the most outspoken critics on the Hill of Obama’s immigration plan, called the new strategy a “cop-out.” Rep. Tim Huelskamp, R-Kan., called it a "surrender plan." Thirty House conservatives, including those two lawmakers, penned a letter to House Speaker John Boehner and his deputies urging them to "stand firm" against Obama's executive actions.

Senior GOP House aides told Fox News that a "clean" DHS bill, without immigration provisions, would be hard to pass among House Republicans. That means Boehner may be forced to rely on mostly Democrats to approve it, should he go along with McConnell's plan.

Boehner, though, declined to say Wednesday what he would recommend to his conservative, fractious rank-and-file if the funding bill clears the Senate.

"I'm waiting for the Senate to act. The House has done their job," he said after a closed-door meeting with members. Even so, lawmakers were told to be prepared to spend the weekend in the Capitol to resolve the issue.

“Congress is obliged to use every constitutional check and balance we have to rein in President Obama's lawlessness, and that includes both our confirmation authority over nominees and the power of the purse,” he said.

McConnell’s change in approach tees up a delicate set of negotiations between both parties, and both chambers.

Congress, unless lawmakers can pass a stopgap bill, has just three days to figure out a solution or else parts of the Homeland Security Department will shut down.

“This is crunch-time,” DHS Secretary Jeh Johnson said Wednesday. “The clock is ticking. We’re running out of money.”

First stop for the new plan would be a new set of votes in the Senate. Some Senate Democrats initially suggested that Boehner should first commit to support the plan – which, so far, the speaker has not done. But Reid made clear Wednesday that his caucus is comfortable with the plan.

The question, then, would be whether Boehner could get enough support from his caucus to pass it – or, as he has before, turn to Democrats to lift the bill over the finish line in the House.

Republican Rep. Matt Salmon of Arizona said Boehner would find himself on "very thin ice" if he relied primarily on Democratic votes to pass the DHS funding bill.

But another House Republican allied with Boehner predicted Tuesday night that McConnell's plan might win approval. Noting that a federal judge in Texas has issued an order blocking implementation of Obama's plan, Rep. Tom Cole of Oklahoma said the court had "effectively stopped the president's executive action," at least now. "So I don't think we'd run the risk of shutting down Homeland Security," he added.

Boehner could also change the McConnell plan and send back his own alternative. But Reid warned the House not to add “riders” or “tricks” to the bill.

“If he sends something back that is vexatious with all these riders and anti-immigrant stuff, he won't be able to go to conference, and he has to understand that,” Reid said.